The development of ultra-intense lasers delivering the same power as the entire U.S. power grid has enabled the study of cosmic phenomena such as supernovae and black holes in earthbound laboratories. Now, a new method developed by computational astrophysicists at the University of Chicago allows scientists to analyze a key characteristic of these events: their powerful and complex magnetic fields.

In the field of high-energy density physics, or HEDP, scientists study a wide range of astrophysical objects—stars, supermassive black holes at the center of galaxies and galaxy clusters—with laboratory experiments as small as a penny and lasting only a few billionths of a second. By focusing powerful lasers on a carefully designed target, researchers can produce plasmas that reproduce conditions observed by astronomers in our sun and distant galaxies. 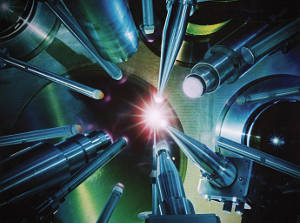 Planning these complex and expensive experiments requires large-scale, high-fidelity computer simulation beforehand. Since 2012, the Flash Center for Computational Science of the Department of Astronomy & Astrophysics at UChicago has provided the leading open computer code, called FLASH, for these HEDP simulations, enabling researchers to fine-tune experiments and develop analysis methods before execution at sites such as the National Ignition Facility at Lawrence Livermore National Laboratory or the OMEGA Laser Facility in Rochester, N.Y.

“As soon as FLASH became available, there was kind of a stampede to use it to design experiments,” said Petros Tzeferacos, research assistant professor of astronomy and astrophysics and associate director of the Flash Center.

During these experiments, laser probe beams can provide researchers with information about the density and temperature of the plasma. But a key measurement, the magnetic field, has remained elusive. To try and tease out magnetic field measurements from extreme plasma conditions, scientists at MIT developed an experimental diagnostic technique that uses charged particles instead, called proton radiography.

“We chose to go after experiments motivated by astrophysics where magnetic fields were important,” said Lamb, the Robert A. Millikan Distinguished Service Professor Emeritus in Astronomy & Astrophysics and director of the Flash Center. “The creation of the code plus the need to try to figure out how to understand what magnetic fields are created caused us to build this software, that can for the first time quantitatively reconstruct the shape and strength of the magnetic field.”

In proton radiography, energetic protons are shot through the magnetized plasma towards a detector on the other side. As the protons pass through the magnetic field, they are deflected from their path, forming a complex pattern on the detector. These patterns were difficult to interpret, and previous methods could only make general statements about the field’s properties.

By conducting simulated experiments with known magnetic fields, the Flash Center team constructed an algorithm that can reconstruct the field from the proton radiograph pattern. Once calibrated computationally, the method was applied to experimental data collected at laser facilities, revealing new insights about astrophysical events.

The combination of the FLASH code, the development of the proton radiography diagnostic, and the ability to reconstruct magnetic fields from the experimental data, are revolutionizing laboratory plasma astrophysics and HEDP. “The availability of these tools has caused the number of HEDP experiments that study magnetic fields to skyrocket,” said Lamb.

The new software for magnetic field reconstruction, called PRaLine, will be shared with the community both as part of the next FLASH code release and as a separate component available on GitHub. Lamb and Tzeferacos said they expect it to be used for studying many astrophysics topics, such as the annihilation of magnetic fields in the solar corona; astrophysical jets produced by young stellar objects, the Crab Nebula pulsar, and the supermassive black holes at the center of galaxies; and the amplification of magnetic fields and acceleration of cosmic rays by shocks in supernova remnants.

“The types of experiments HEDP scientists perform now are very diverse,” said Tzeferacos. “FLASH contributed to this diversity, because it enables you to think outside the box, try different simulations of different configurations, and see what plasma conditions you are able to achieve.”

The paper, “Inferring Morphology and Strength of Magnetic Fields From Proton Radiographs,” was published online by Review of Scientific Instruments. The work was funded by grants from the U.S. Department of Energy and the National Science Foundation.