Having a companion in old age is good for people — and, it turns out, might extend the chance for life on certain Earth-sized planets in the cosmos as well.

But astronomers at the University of Washington and the University of Arizona have found that for certain planets about the size of our own, the gravitational pull of an outer companion planet could generate enough heat — through a process called tidal heating — to effectively prevent that internal cooling, and extend the inner world’s chance at hosting life. 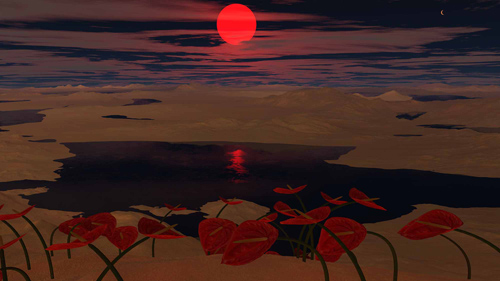 For certain ancient planets orbiting smaller, older stars, the gravitational influence of an outer companion planet might generate enough energy through tidal heating to keep the closer-in world habitable even when its own internal fires burn out. But what would such a planet look like on its surface? Here, UW astronomer Rory Barnes provides a speculative illustration of a planet in the habitable zone of a star about the size of the sun. “The star would appear about 10 times larger in the sky than our sun, and the crescent is not a moon but a nearby Saturn-sized planet that maintains the tidal heating,” Barnes notes. “The sky is mostly dark because cool stars don’t emit much blue light, so the atmosphere doesn’t scatter it.”Image credit: Rory Barnes, University of Washington

UW astronomer Rory Barnes is second author of a paper published in the July issue of the Monthly Notices of the Royal Astronomical Society. The lead authors are graduate student Christa Van Laerhoven and planetary scientist Richard Greenberg at the University of Arizona.

Tidal heating results from the gravitational push and pull of the outer companion planet on its closer-in neighbor, Barnes said. The effect happens locally, so to speak, on Jupiter’s moons Io and Europa. The researchers showed that this phenomenon can take place on exoplanets — those outside the solar system — as well.

Using computer models, the researchers found the effect can occur on older Earth-sized planets in noncircular orbits in the habitable zone of low-mass stars, or those less than one-quarter the mass of the Sun. The habitable zone is that swath of space around a star just right to allow an orbiting rocky planet to sustain liquid water on its surface, thus giving life a chance.

The outer planet is necessary, Barnes added, to keep the potentially habitable planet’s orbit noncircular. When a planet’s orbit is circular, the gravitational pull from its host star is constant, so its shape never changes, and there is no tidal heating.

And so, the researchers conclude, any discoveries of Earth-sized planets in the habitable zone of old, small stars should be followed by searches for outer companion planets that might improve the inner world’s chance at hosting life.

The combined effect of the ancient planet’s own tectonics and tidal heating generated by the outer companion, Barnes said, might allow such planets to host some of the longest-lived surface habitats in the universe.

“Perhaps in the distant future, after our sun has died out, our descendants will live on worlds like these.”