Coming Soon to a Server Near You: Fewer Internet Delays

Researchers at the UA-led Center for Integrated Access Networks, the largest optical research center in the U.S., are developing methods to improve transmission speed, efficiency and reliability of Internet content, including everything from cell phone calls or texts to emails and television.

If you’ve ever received an email or text hours after it was sent and privately raged at having missed a deadline, or twiddled your thumbs while waiting for a webpage to load, then you’ve been a victim of Internet latency.

Latency can occur for a number of reasons associated with disruption of an information lane such as an electronic wire or fiber optic cable, or from an overload of Internet-based messaging that can occur with increased network traffic. 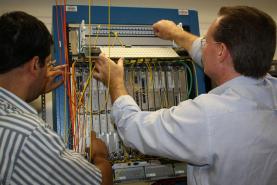 The TOAN testbed at the UA-led Center for Integrated Access Networks models all zones of today’s Internet network. Here, researchers are able to test novel hardware and software to see how it performs in the system overall. (Photo by Beatriz Verdugo/UANews)

Researchers at the Center for Integrated Access Networks, or CIAN, headquartered at the University of Arizona’s College of Optical Sciences, are working to improve the efficiency of signal transmission through the invisible network of electronic and optic signals that forms the backbone of modern communication systems.

The UA-led center is the largest academic research program in optical networking in the U.S. today.

“CIAN is a type of National Science Foundation-funded program called an Engineering Research Center. These centers are selected in strategically important areas that relate to perceived national needs, including competitiveness in the future global economy,” said John Wissinger, a research professor in the UA’s College of Optical Sciences who serves as testbed lead and associate director for industry collaboration for CIAN. 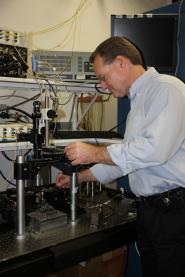 “We are primarily working on optical networking technologies,” said Massoud Karbassian, a post-doctoral researcher at the center’s Testbed for Optical Aggregation Networking, or TOAN lab.

“Fiber optics is a medium for light transport,” said Karbassian. In the same way that an electrical wire creates a pathway for electrons to travel, glass microfibers create a pathway for photons.

“It’s a medium for carrying information through laser beams, which generate photons. It’s the backbone of modern communication: Wireless services we get at home, mobile phones and even enterprise networks are all connecting over the same infrastructure, which is the Internet.”

Messages sent through the Internet start out as electronic signals sent from a device such as a computer, mobile phone or iPad.

“All these traffic types are aggregated, or brought together, at a network node,” said Karbassian. “This requires collecting different types of traffic and handling their routing, reliability and security. This part is the key functionality of the whole network infrastructure because it deals with collecting all these different types of traffic and handling them efficiently.”

At network nodes, the electronic signals are converted to optical signals, which then are transmitted through optical fibers contained in underground cables – or undersea cables for trans-continental distances. 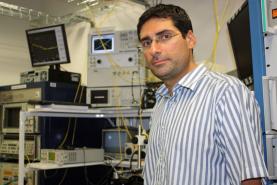 Massoud Karbassian: “CIAN is unique in the U.S. in terms of the capabilities and facilities we have, especially in terms of having a very close partnership with industry that gives us the advantage of working with industry state-of-the-art equipment sets, proposing innovations to them, and collaborating to make it happen.” (Photo by Beatriz Verdugo/UANews)

“For example, you’re here in Arizona, and you’re sending an email to your friend in England. Your email is probably sitting someplace like San Francisco, where the server is located, and your friend from England must connect to that server to fetch the email,” said Karbassian. “There is a need for connection between that server in San Francisco and the user in London.”

At the end of the fiber-optic transport network, the message is collected in a server and converted back into an electronic signal that finally is transmitted to a receiver, for example your friend’s email inbox.

“Our ultimate goal is to bring optical processing closer to the end users,” said Karbassian. To that end, CIAN is working to increase the extent of optical networks so that messages spend more time traveling as optical signals than as electronic signals.

Capable of carrying much more information at much greater speeds, fiber optics has many benefits as an information transmission medium over electronics.

“Fiber optics has much lower power consumption,” said Karbassian. “It’s very low noise, which is to say that it’s very insensitive to electromagnetic interference. It also has very low loss, which means it can carry information for a longer distance and with higher speed compared with electric wires.” 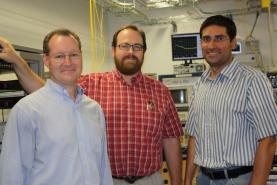 For example, imagine a message sent electronically travels a few meters per second. “Through fiber optics you can send it tens of kilometers per second,” said Karbassian.

Another important part of the researchers’ efforts is to address how information is routed through the network pathways.

“The problem is you have all this information hitting the network, and it’s diverse in its format. In fact it can be diverse in its physics, because you have electrical signals, you have single-wavelength light and you have multi-wavelength light, all with information coded different ways. The problem of collecting all that traffic up is a challenge of intelligent aggregation – we’re working on efficiently overcoming the resulting congestion issues at the network interface,” said Wissinger.

“Incoming traffic also has different requirements in terms of its performance,” said Wissinger. “Some traffic is very latency-sensitive, which means it can’t incur delays. For other kinds of traffic, such as your email, the fact that it’s delayed 200 milliseconds getting to your inbox is completely in-obvious to you. As a consumer you would not put a penalty on that. Or sometimes your phone calls can get a little noisy, but as long as the call’s not dropped, you probably tolerate it.”

“However, in high-performance applications such as high-definition video, when all of a sudden the picture is broken up or freezes, there tends to be very low tolerance.”

“So one of the main challenges in this part of the network is: How do you deliver all this distinct traffic that has different quality-of-service requirements in the most efficient way?”

CIAN researchers are designing a system that will automatically make decisions about the priority of different types of messages and find the best way to manage their delivery.

“The network of the future may need to do things like route messages intelligently around impairments or put the highest-priority traffic on the best channels, and all that requires dynamic decision-making in the network,” said Karbassian. To that end, assistant research professor Jun He at the UA’s College of Optical Sciences is working on a program that generates control signals for the network, called control plane.

“I think the best example is this: You’re watching the Super Bowl and suddenly part of the network degrades, say due to an amplifier failure. If the lane is physically disrupted, then engineers often have to go to the field to fix the problem, but in the meantime a smarter system could automatically decide there is something wrong with the link and just reroute the traffic.”

In this case, the switch between network lanes might be so fast that you wouldn’t even notice a video signal disruption, let alone miss a touchdown.

“Scalability is also a key issue for the future network,” said Wissinger. “By scalability we mean a network infrastructure that grows gracefully, in terms of cost and performance, as the number of new users grows, and also as bandwidth requirements per user grow. There are applications emerging that exploit a gigabit to the end-user, but if everybody wants that gigabit at the same time, suddenly the surge demand on the network can be untenable and we need designs that efficiently handle such cases too.”

Today’s “business-as-usual” approach is to keep scaling up the current network infrastructure, for example continuing to add larger and faster switches – where Internet traffic comes in and gets routed from one user to another, or switched onto new information lanes – which just adds more and more equipment to what’s already deployed today. It is a very energy-hungry approach, not just because the switch boxes consume a lot of energy, but also they generate a lot of heat, which requires expensive cooling solutions. These problems are especially severe in mega-datacenters, which is also an area that CIAN researches.

CIAN has a potential technology solution. “An area in which CIAN and its partner institutions are very strong is integrated silicon photonics,” said Wissinger. “These are basically computer chips that process light in addition to electrical signals, and they effectively miniaturize what today are large, energy-hungry network elements, shrinking them to the size of computer chips, with a small fraction of the energy requirement.”

Said Wissinger: “The evolution we project is similar to what happened with computing, where you once needed a super computer to do something that a few years ago you could do on your PC and now today you can do on your smart phone. But with optics and light.”