By combining the use of drug-carrying nanoparticles with an organ-preserving machine, Yale researchers have developed a procedure that could help improve long-term outcomes for transplant recipients.

A technology known as ex vivo normothermic machine perfusion (NMP) has emerged in recent years as a means of keeping a donor organ “alive” outside the body before implantation. The process involves pumping warm, oxygenated red blood cells through an organ removed from a deceased donor. This helps repair damage to the organ and gives doctors time to assess the quality of the organ.  It has also helped increase the number of organs suitable for transplant.

In collaboration with researchers from the University of Cambridge, the Yale researchers are working to expand the technology’s rehabilitation abilities with a nanoparticle-based drug delivery system that can deliver a variety of treatments directly to critical targets in a human kidney while it is still in the device. Their results are published in Science Translational Medicine.

The Yale team, from the School of Medicine and the School of Engineering and Applied Sciences, focused specifically on treating the organ’s vascular endothelial cells. These cells, which line the surface of blood cells, are the first point of contact with a recipient’s immune system after the transplant and are critical to the body’s acceptance of the organ. Treating these cells directly with drugs that temporarily block the inflammatory signaling to the recipient’s immune system allows the graft time to heal and increases the transplant’s chances for long-term success. It could also decrease the chance of infection by easing the systemic immunosuppression following transplant, said the researchers. 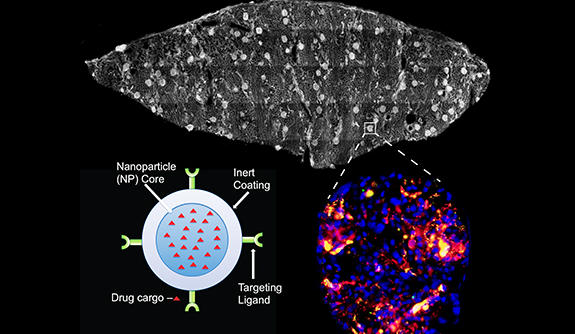 Diagram of the drug-carrying nanoparticle (bottom left); image of a biopsy taken from a human kidney stained with vasculature (top right). The highlighted and enlarged image is an example of nanoparticle accumulations. The vascular-targeted nanoparticles are in red; control non-targeted particles are in green. (Photo by Jenna DiRito and Gregory T. Tietjen)

Endothelial cells are considered an ideal target because they are readily accessible while the organ is on the machine and because alterations in these cells alert the host’s immune system that the organ is foreign and to any damage the organ may have, said one of the project’s leaders, Jordan Pober, the Bayer Professor of Translational Medicine and vice-chair of immunobiology. Both signals can trigger rejection.

“We know a lot about what these changes in the endothelium are, and how to mask them to reduce rejection,” Pober said.

To target the cells, the researchers coated nanoparticles developed in the lab of Mark Saltzman, the Goizueta Foundation Professor of Biomedical Engineering, Chemical & Environmental Engineering & Physiology, with an antibody that targets CD31, a protein abundant in the endothelium. These particles, along with a control group of non-targeted particles, were injected into the perfusion device while its fluid was passing through a donor kidney for periods of four to six hours.

“For these studies, we produced antibody-coated nanoparticles from polymers that are well known to be safe in humans, so we anticipate that this technology can be rapidly translated into clinical practice,” said Saltzman, another leader of the project. Saltzman also is a member of the Yale Cancer Center. “We have previously shown that these nanoparticles release agents slowly over time, so the effect of the treatment could last well after the organ transplantation is complete.”

They found that, on average, the accumulation of targeted particles around endothelial cells could reach as much as two to five times higher than the control group. In certain regions of some of the more well-perfused kidneys, though, the accumulations were much higher, with levels exceeding 10 times that of the control particles.

In addition to successfully targeting vascular endothelial cells, the research represents another breakthrough: the development of a platform for studying such drug delivery systems on human organs.

“It’s already very difficult getting particles where they are needed following systemic delivery, and even if you can do that in an animal, the conditions are very likely to be different in a person,” said Gregory Tietjen, assistant professor of surgery and first author of the paper. Tietjen, who has opened a new lab focused on using the ex vivo perfusion platform to develop more precise nanomedicines, said he is “excited about having this infrastructure we developed to do this kind of preclinical, quantitative work in human organs.”

“We think it can not only provide new therapeutic strategies for organ transplant, but it also has the potential to provide new insights for systemic drug delivery.”