Colonial enslavement of Native Americans included those who surrendered, too

Study by Brown University historian finds that Native Americans who surrendered during King Philip’s War were sold into slavery, with long-lasting effects.

PROVIDENCE, R.I. [Brown University] —A study by Linford D. Fisher, associate professor of history at Brown University, finds that Native Americans, including noncombatants, who surrendered during King Philip’s War to avoid enslavement were enslaved at nearly the same rate as captured combatants.

Native American slavery “is a piece of the history of slavery that has been glossed over,” Fisher said. “Between 1492 and 1880, between 2 and 5.5 million Native Americans were enslaved in the Americas in addition to 12.5 million African slaves.”

While natives had been forced into slavery and servitude as early as 1636, it was not until King Philip’s War that natives were enslaved in large numbers, Fisher wrote in the study. The 1675 to 1676 war pitted Native American leader King Philip, also known as Metacom, and his allies against the English colonial settlers.

While Africans who were enslaved did not know where they would be taken, Native Americans understood that they could be sent to Caribbean plantations and face extremely harsh treatment far from their homes and communities, according to the study. Fear of this fate spurred some Native Americans to pledge to fight to the death, while others surrendered hoping to avoid being sent overseas, the study found. 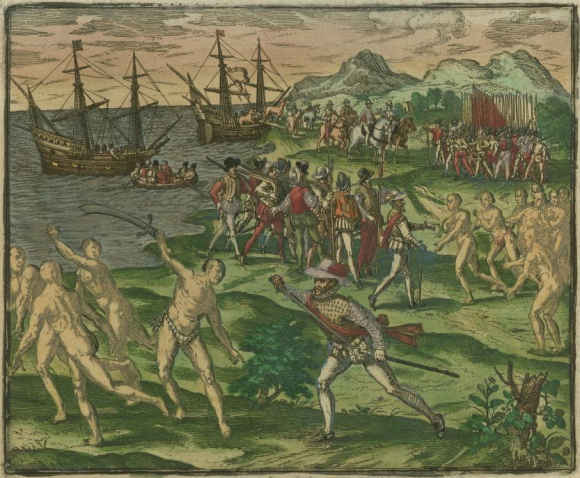 An image from 1595 depicting conflict between Native Americans in Mexico and Spanish colonists led by Francisco de Montejo. Image courtesy of the John Carter Brown Library at Brown University

Fisher’s study, “‘Why shall wee have peace to bee made slaves’: Indian Surrenderers during and after King Philip’s War,” appears in the journal Ethnohistory, a volume devoted to scholarship on indigenous slavery in the New World. Native American enslavement was documented in colonial correspondence, shipping records, court cases, town records, colonial government orders and petitions from colonists to the British government.

“Even contemporary official histories of the war all point to the same thing: Indians were enslaved en masse and either distributed locally or sent overseas to a variety of destinations,” Fisher wrote in the study.

Studies in native slavery have opened up in recent years, Fisher said, with award-winning books published in 2002 and 2003 highlighting the systematic nature of indigenous enslavement, even within English colonies. Fisher’s study on those who surrendered in King Philip’s War looks at what factors contributed to native slavery and the impact enslavement had on Native Americans for generations.

To surrender or resist

Fisher examines the short- and long-term effects of native slavery in his study, noting that during the war, the widespread fear of being sold overseas as slaves was used by Philip-allied Native Americans as a tool to recruit natives to their side.

Other Native Americans surrendered, Fisher wrote, either in response to explicit inducements by the English offering mercy, or because they hoped that doing so would be understood as a statement of neutrality. These surrenderers could be individuals, families, larger bands or entire communities, Fisher said.

Some Native Americans offered their services to the English in the war, like Awashonks, the female chief of a confederation of Sakonnet Indians, who pledged support on the condition that Sakonnet men, women and children would not be killed or sent out of the country as slaves, according to the study.

Especially near the war’s end, Fisher wrote, natives surrendered in larger numbers in direct response to promises of leniency, but “leniency” had no consistent, practical meaning.

English authorities focused first on disarming natives, either by selling guns turned in by surrenderers or prohibiting them from bearing arms, Fisher wrote. English communities objected to letting natives who surrendered simply go free, and housing and feeding them was complicated, so often captured and surrendered Native Americans were simply sold into slavery, both overseas and within New England, or forced into servitude for limited terms within English households. In addition, native communities were asked to pay an annual tribute of five shillings per male “as an acknowledgment of their subjection” to the government of Connecticut, according to the study.

Fisher also argues that there was an ideological component to enslaving Native Americans. Among colonists, “there was a presumption involving the innate inferiority of natives,” he said.

“There were proto-racial notions of European superiority, plus an appetite for land,” he said. “If you look at the history of the colonies, slavery happens almost right away.”

Fisher said he is increasingly convinced that, for colonists, “slavery was a normal part of their mental framework.”

Some free Native Americans working with the English tried to influence where Native American surrenderers would be settled and how they would be treated, Fisher wrote, like Uncas, the sachem of the Mohegans in Connecticut.

Uncas, who fought on the side of the English, “seemed determined postwar to keep Indians out of English households and — even more important — off of English merchant ships that threatened to take them to the Caribbean,” Fisher wrote. Uncas and other Native Americans also encouraged captives to run away and sheltered them when they did, or helped them resettle elsewhere, according to the study.

In other cases, Fisher wrote, Native Americans requested captives as servants for themselves, sometimes to keep them out of English households, or served as slave-trading middlemen. In one case, Fisher notes, a Native American slave owned by a Pequot leader was sold by him to an enslaved African woman.

“The shadow of native enslavement in New England extends into the 18th century and beyond,” Fisher said. “There are records of people petitioning for freedom in the 1740s who were the descendants of Native Americans first enslaved during King Philip’s War.”

In the study, he wrote, “Small legal loopholes and dishonest practices on the ground ensured that, in many cases, limited-term service turned into lifelong and even heritable slavery.” In 1676, Connecticut officials decreed that a native slave’s term of service could be lengthened but not shortened.

A law passed the same year by the Rhode Island General Assembly seemed on the surface to outlaw Indian slavery, but, Fisher noted, in practice that and other laws ensured that Native surrenderers were “disposed of” for the benefit of the colony, with various terms of servitude. For Native Americans five years of age or younger, their servitude lasted until they were 30 years old.

These enslavement practices permanently disrupted the “lives, livelihoods and kinship networks of thousands of Indians,” Fisher wrote, and sometimes slavery was simply given another name.

In 1721, 45 years after the end of King Philip’s War, the Connecticut General Assembly took up the question of second-generation Native American child slaves. The Native American children who had been placed as servants in English households after the war had grown up and had children of their own. What should be done with them? Fisher wrote that while leaders did not approve of enslaving them, they also did not want to set them free, so that generation of children also became indentured servants.

Native Americans sold overseas occasionally made it back to the United States, Fisher wrote. Others died or disappeared into a wider slave market and labor force, or became established in the locations where they were sent, like the modern-day community of individuals in Bermuda who claim New England Indian descent.