Coffee for the birds

Coffee grown under a tree canopy is promoted as good habitat for birds, but recent University of Delaware research shows that some of these coffee farms may not be as friendly to our feathered friends as advertised.

Working with geographer Robert Rice of the Smithsonian Migratory Bird Center (SMBC), University of Delaware Professor of Entomology Doug Tallamy and former UD graduate student Desirée Narango studied canopy tree preference of birds in shade-coffee farms with a particular focus on the implications for migratory birds that spend the winter in neotropical coffee farms. The research was published in the journal Biotropica.

Americans drink a lot of coffee — 64 percent of those aged 18 or over had at least one cup per day. That’s more than 150 million people in the U.S. and we all know one cup is a light day for many of our friends and family. This incredible demand for coffee means a lot of land in tropical zones is used to grow coffee beans in neotropical countries like Colombia and Nicaragua (where the UD study took place). Across central and South America, land converted to coffee agriculture occupies more than five million hectares of what was once prime overwintering natural habitat for migratory birds. 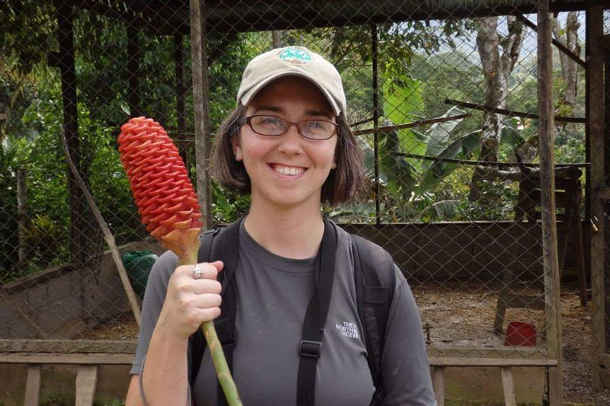 “Coffee grows right at the altitude that most of our neo-tropical migratory birds are spending the winter, particularly species that are losing one to two percent of their population every year like the cerulean warbler, Canada warbler and wood thrush,” said Tallamy. “A lot of this land has been leveled for coffee farms.”

In these and other countries in the tropical zone, forests are being cut down and turned into ecological deserts at an alarming rate. In traditional coffee agriculture, farmers clear-cut an area, remove all trees, and plant coffee plants in direct sun. In that case, the cultivated area provides almost no habitat for species of birds and insects. An alternative method for growing coffee is shade-grown coffee. The beans are grown in the shade of a mature tree canopy, which can also provide ecosystem services for the farmer (like shade) as well as habitat for local wildlife.

“Sun coffee produces more yield, but is not as sustainable,” said Narango, who now works for Advanced Science Research Center at City University of New York and the University of Massachusetts Amherst. “Shade-coffee farms can produce just as high quality coffee beans as the direct sun approach and with added benefits for people and wildlife. First, it’s more comfortable for the workers. Second, the tree canopy protects the coffee. Third, it provides critical habitat for migratory birds and other wildlife.”

Important to note, the insects that are attracted to these trees (and attract the birds to forage) do not pose a threat to coffee plants because they don’t feed on them.

Most coffee farms are still sun-grown. Fortunately, some farmers have gone to the shade-coffee route. They can earn a Bird Friendly coffee certification from the Smithsonian through a combination of foliage cover, tree height and biodiversity to provide quality habitat for birds and other wildlife. SMBC has advocated the use of shade trees in coffee systems since the 1990s, when Smithsonian staff discovered the habitat quality of such systems in southern Mexico. But, until now, no one asked an overlooked question. Which types of trees are bird friendly? Tallamy’s short answer: Non-native, exotic trees do little to nothing for birds and the insects they feast on, but certain native plants do wonders.

“The research all started here in Delaware when we realized how different plants are in producing food that drives bird populations,” said Tallamy, who conducted previous research with Narango and SMBC on non-native plants on bird populations.

The Smithsonian’s Rice added, “We had yet to understand which trees actually provide the better food resources in terms of insects for birds. Doug Tallamy has researched the association of tree species and the insects that make a living on them in the U.S. After talking with Doug, we thought that investigating that association within the shade-coffee systems would yield valuable insight as to which trees are the most beneficial for birds. Diverse, native trees act very much like local forest and do so with the economic advantage of having coffee produced beneath the shade canopy.”

The researchers quantified bird foraging activity on 22 tree species in two coffee farms. Specifically, they used timed observations to determine tree preferences, foraging bird abundance, foraging time and species richness of birds using each canopy tree species. Results indicate that birds do not forage randomly, and instead exhibit preferences for particular native tree species, especially legumes. The UD-Smithsonian findings indicate that coffee farms can serve as habitat refuge for wildlife, evidence that agroforestry land can be improved for birds of conservation concern by prioritizing canopy tree species that not only help birds, but also farm productivity.

“Farmers often select tree species that are beneficial to them and produce other products to sell in addition to coffee,” said Narango. “Some farms might prioritize walnut trees because they produce lumber or mango trees to produce fruit. There are so many choices. The goal of this project was to get more information to help farmers make that decision.”

In an effort to get dual crops out of the land, eucalyptus trees are another popular choice as they are a great source of lumber. But these trees are native to Australia, not central and South America. And these non-natives trees don’t jive with local insects in these critical migratory bird zones.

“A very common scenario on these farms is to have eucalyptus, pine, mango and citrus,” Tallamy said. “All of these are non-native trees that support few insects — critical food for birds — or not nearly enough insects to make a difference. If you have a substantial amount of land with non-native plants, we’re not helping the birds at all. Biodiversity-wise, it’s a real scourge.”

So farms with these non-native trees would not get certified as bird friendly, but are still growing shade-coffee.

“The public reads shade-coffee and thinks it’s automatically bird friendly. That’s not necessarily the case,” said Tallamy. “But the growers don’t know. It’s not that they are trying to pull a fast one. They think insects are everywhere. They don’t know that the type of plant matters, so of course they use the plant that produces the highest amount of income. We can now correct that misinformation.”

Attracting birds could also serve as a boon to coffee production because birds attracted to the canopy trees can also protect the coffee crop by providing pest control. The plants that tended to be highly preferred, native legumes, also simultaneously provide nitrogen to the coffee crops increasing production.

“The preferred tree species for birds’ foraging tended to be native, which makes sense from an evolutionary point of view,” Rice said. “Insects have co-evolved with native trees over millennia, so our findings that birds preferred the native species, while not surprising, is clearly confirming. Our challenge for future studies will be to determine which trees are providing the greatest diversity and abundance of insects.”

SMBC’s long-term relationship with coffee producers throughout Latin America positioned the researchers well to help find the countries and regions within countries to conduct this research. With funding from the Disney Conservation Fund, Rice found local collaborators in Colombia and Nicaragua.

The study points strongly to the recently publicized topic of global insect decline.

“The decline is not new. What’s new is that the public is beginning to recognize it. People are writing about it. They write about climate change, pesticides, and habitat loss, but they aren’t being specific enough,”  Tallamy said. “The fact that humans are taking away the plants that allow insects to thrive and replacing them with plants that do not is something that has not been mentioned in any articles. Habitat is not just a location to live; it’s the food that you eat. Insects need particular plants. Taking those plants away is, in my opinion, a major cause of insect decline, which is what we are going to study next.”

Wildlife ecology and conservation major Kerry Snyder, who graduated in 2015, is also a co-author on the research paper. As a UD junior, she began working on undergraduate research with Tallamy and formed her honors thesis around the topic.

“Research gave me an opportunity to travel abroad and learn how environmental problems affect farmers in Central America. In addition to the technical experience the work gave me, set me up well for my assignment in the Peace Corps,” said Snyder, who studied for two summer sessions under Tallamy and works for the U.S. Patent and Trademark Office. “Doing research allowed me to connect what I was learning in the classroom with real environmental conservation issues and allowed me to learn about the importance of coffee certification programs. It would have been impossible to take a class that would have taught me everything I learned through this experience.”

She was able to secure funding from the Delaware Environmental Institute’s Environmental Scholar Program to cover travel expenses. UD is known for a high number of undergraduate research opportunities compared to other universities.