REDMOND, Wash. — Research released today by Microsoft Corp. shows that small and midsize businesses (SMBs) are gaining significant IT security benefits from using the cloud, according to a new Microsoft study in five geographies.

The study shows that 35 percent of U.S. companies surveyed have experienced noticeably higher levels of security since moving to the cloud.1 In addition, 32 percent say they spend less time worrying about the threat of cyberattacks. U.S. SMBs using the cloud also spend 32 percent less time each week managing security than companies not using the cloud. They are also five times more likely to have reduced what they spend on managing security as a percentage of overall IT budget.

“There’s a perception that security is a barrier to cloud adoption,” said Adrienne Hall, general manager, Microsoft Trustworthy Computing. “Yet when companies embrace and invest in cloud services, they find the benefits far outweigh previous concerns.”Time and money spent managing security prior to using cloud services is being reinvested by SMBs to grow their businesses and be more competitive. The survey shows the following in the U.S.: 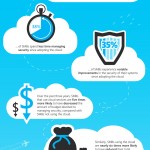 Cloud Security Benefits for SMBs (U.S.). Cloud security is a key topic of discussion for many considering the cloud. Microsoft's Trustworthy Computing group conducted research in the small and midsize businesses (SMB) sector in the U.S. Image credit: Microsoft

“Any solution that helps SMBs’ bottom line has to be good for them and the economy,” said Ryan Brock, vice president of Worldwide SMB Cloud & Channels at Access Markets International Partners. “When it comes to security, the cloud offers SMBs a level of expertise, specialist resources and investment that they cannot hope to match. This translates into cost and time savings and better protection against cyberthreats, which gives them the freedom to innovate and grow their business.”

An example of a company that has realized the security benefits of the cloud is SkyWire Media Inc., a small business in Nevada that helps other businesses personalize and distribute rich content to mobile devices. As a small business, it was a challenge for SkyWire to keep up to date with security management. After transitioning to Windows Intune, a cloud-based management and security solution, the company no longer faces the same problem.

By simplifying software distribution and streamlining the security upgrade process, Windows Intune helped SkyWire save $90,000 (U.S.) in IT costs over a span of six months, a savings of $15,000 (U.S.) per month. By retiring third-party antivirus and antimalware tools, the company was able to redeploy the cost of overseeing these processes.

“Since we started using Windows Intune, support calls are down by 70 percent,” said Thomas Castleberry, chief operating officer, SkyWire. “We can now prevent malware before it interferes with the productivity of our salespeople — and this means they can go out and win new business.”The study, commissioned by Microsoft and conducted by research company comScore Inc., polled companies with between 100 and 250 PCs in the U.S., Singapore, Malaysia, India and Hong Kong.

¹ For the purpose of this research, cloud users were defined as companies that used a cloud service via a subscription model.