Web users around the globe will be able to help professional astronomers in their search for Earth-like planets thanks to a new online citizen science project called Planet Hunters that launched Dec. 16. at www.planethunters.org.

Planet Hunters, which is the latest in the Zooniverse citizen science project collection, will ask users to help analyze data taken by NASA’s Kepler mission. The space telescope has been searching for planets beyond our own solar system—called exoplanets—since its launch in March 2009.

“The Kepler mission has given us another mountain of data to sort through,” said Kevin Schawinski, a Yale University astronomer and Planet Hunters co-founder. Schawinski also helped create the Galaxy Zoo citizen science project several years ago, which enlisted hundreds of thousands of web users around the world to help sort through and classify a million images of galaxies taken by a robotic telescope.

The Kepler space telescope is continually monitoring nearly 150,000 stars in the nearby constellation Cygnus, recording their brightness over time. Astronomers analyze these images, looking for any stars that show a slight dimming of their brightness. This dimming could represent a planet passing in front of its host star, blocking a tiny fraction of its light as seen from Kepler’s vantage point in space. Those stars that periodically dim are the best candidates for hosting relatively small planets that tightly orbit their stars, similar to Earth. 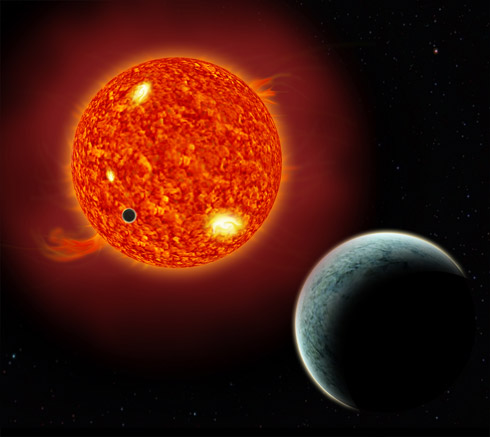 As exoplanets pass in front of their host stars, they block some of the star’s light, dimming it from our point of view here on Earth. This dimming is what users will look for in the new online citizen science project Planet Hunters. Image credit: Haven Giguere/Yale

“The Kepler mission will likely quadruple the number of planets that have been found in the last 15 years, and it’s terrific that NASA is releasing this amazing data into the public domain,” said Debra Fischer, a Yale astronomer and leading exoplanet hunter. Although Planet Hunters is not tied directly to the Kepler mission, the website will serve as a complement to the work being done by the Kepler team to analyze the data.

Because of the huge amount of data being made available by Kepler, astronomers rely on computers to help them sort through the data and search for possible planet candidates. “But computers are only good at finding what they’ve been taught to look for,” said Meg Schwamb, another Yale astronomer and Planet Hunters co-founder. “Whereas the human brain has the uncanny ability to recognize patterns and immediately pick out what is strange or unique, far beyond what we can teach machines to do.”

After the success of the Galaxy Zoo project, the Yale team decided to enlist web users once again to create what they hope will become a global network of human computing power.

When users log on to the Planet Hunters website, they’ll be asked to answer a series of simple questions about one of the stars’ light curves—a graph displaying the amount of light emitted by the star over time—to help the Yale astronomers determine whether it displays a repetitive dimming of light, identifying it as an exoplanet candidate.

“The great thing about this project is that it gives the public a front row seat to participate in frontier scientific research,” Schwamb said.

The possibility of Earth-like planets beyond our own solar system has captured the collective human imagination for centuries. Today, astronomers have discovered more than 500 planets orbiting stars other than the Sun—yet almost all of these so-called exoplanets are large gas giants, similar to Jupiter, which bear little resemblance to Earth. Ever since the first exoplanet was discovered in 1995, astronomers have raced to find ever smaller planets closer to our own world.

“The search for planets is the search for life,” Fischer said. “And at least for life as we know it, that means finding a planet similar to Earth.” Scientists believe Earth-like planets are the best place to look for life because they are the right size and orbit their host stars at the right distance to support liquid water, an essential ingredient for every form of life found on Earth.

Yet Fischer is quick to caution that, even with the exceptional data from the Kepler telescope, it will be extremely difficult to pick out the weak signal created by such a small planet as it dims its host star. “Planet Hunters is an experiment—we’re looking for the needle in the haystack,” she said.

Still, Galaxy Zoo proved that ordinary people can make extraordinary discoveries. Several Galaxy Zoo users were listed as co-authors on more than 20 published scientific papers that resulted from the citizen science project, most of whom had no prior knowledge of astronomy.

“The point of citizen science is to actively involve people in real research,” Schawinski said. “When you join Planet Hunters, you’re contributing to actual science—and you might just make a real discovery.”

Learn more about other Zooniverse citizen science projects, including Galaxy Zoo, at https://www.zooniverse.org.