Cilia — short, hair-like fibers — are widely present in nature. Single-celled paramecia use one set of cilia for locomotion and another set to sweep nutrients into their oral grooves. Researchers at Brown have discovered that those two cilia sets operate at different speeds when the viscosity of the environment changes. That suggests different molecular motors driving them, which could help explain how cilia have come to be used for so many different tasks in nature.

PROVIDENCE, R.I. [Brown University] — Cilia are one of nature’s great multipurpose tools. The tiny, hair-like fibers protrude from cell membranes and perform all kinds of tasks in all kinds of creatures, from helping clear debris from human lungs to enabling single-celled organisms to swim. Now, physicists from Brown University have discovered something that could help scientists understand how cilia have been adapted for so many varied tasks.

The study, led by graduate student Ilyong Jung, looked at the cilia of the single-celled, water-dwelling paramecium. Paramecia are covered with cilia that beat like thousands of tiny oars, propelling the creatures through the water. At the same time, cilia around the paramecium’s “oral groove” sweep nutrients inward, providing all-important nourishment. Through a series of experiments, the researchers showed that oral groove cilia appear to have different molecular motors than the rest of a paramecium’s cilia.

This is the first time anyone has shown two motor behaviors by cilia in a single cell, says James Valles, chair of the Department of Physics at Brown and one of the paper’s senior authors. With a bit more study, Valles hopes this finding could shed light on the molecular mechanisms responsible for these two motor behaviors.

“These motors are behaving differently in these two places in the same cell,” Valles said. “We’re hoping now that we can start pulling the two apart, maybe we can figure out what gives rise to these differences in behaviors. That could help us see why cilia can be so ubiquitous.” 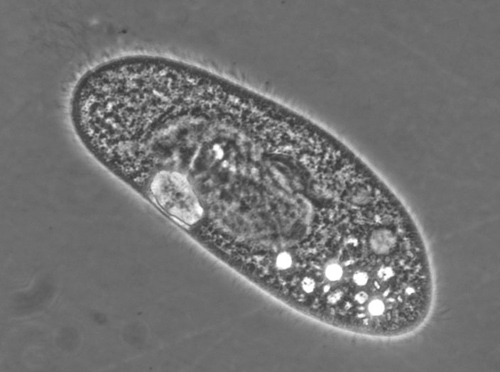 Molecular motors. This paramecium uses cilia for movement and for harvesting nutrients. Researchers have found that cilia in the same organism may operate at different speeds under certain conditions, animated by different molecular motors. Image credit: Valles lab/Brown University

The findings are published in the Jan. 7, 2014, issue of the Biophysical Journal.

The researchers probed the behavior of the cilia by manipulating the viscosity of the liquid in which the paramecia swam. Using powerful microscopes and high-speed cameras, they observed how cilia behaved at a variety of viscosities, starting with the viscosity of plain water and increasing as much as seven-fold.

Morphologically, the two sets of cilia appear to be basically identical. That means the differences in their motion must come from the motors that drive them, the researchers say. Now that they have isolated two different motor behaviors in the same organism, researchers might be able to look at what factors drive those differences.

“Now we have these two motors in the same cell that we can contrast,” Valles said. “Do they have different molecules available to them or different concentrations of molecules that drive their movement? Those are the kinds of questions we’re looking at.”

Those questions will take a bit more study. To help out, the physicists have enlisted the help of Brown biologist Anita Zimmerman. “We’re hoping to learn how to hold on to paramecia so that we can watch them more carefully under different treatments — with different chemicals or flow patterns,” Valles said.

This most recent study has helped lay the groundwork for that future work, which could help explain how these tiny fibers came to be so adaptable.

“Biologists refer to [cilia] as a ‘highly conserved organelle’ because they turn up in so many different organisms and they do this widely varying stuff,” Valles said. “We’re hoping this might lift the lid a little and help us understand how they do it.”

The research was supported by the National Science Foundation. Thomas Powers, professor of physics and engineering, was an author on the paper along with Jung and Valles.