Chemistry on the Edge: Study Pinpoints Most Active Areas of Reactions on Nanoscale Particles

Defects and jagged surfaces at the edges of nanosized platinum and gold particles are key hot spots for chemical reactivity, a team of researchers working at the Department of Energy’s Lawrence Berkeley National Laboratory (Berkeley Lab) and the Hebrew University of Jerusalem in Israel confirmed with a unique infrared probe.

Experiments like this should help researchers to customize the structural properties of catalysts to make them more effective in fostering chemical reactions. 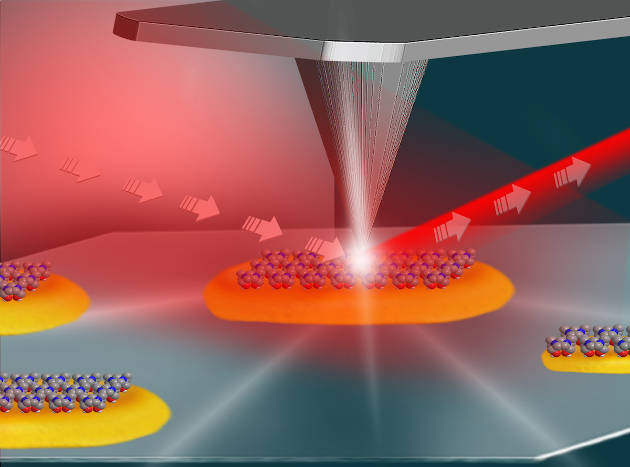 This illustration shows the setup for an experiment at Berkeley Lab’s Advanced Light Source that used infrared light (shown in red) and an atomic force microscope (middle and top) to study the local surface chemistry on coated platinum particles (yellow) measuring about 100 nanometers in length. (Image credit: Hebrew University of Jerusalem)

The study, published Jan. 11 in Nature, is an important step in chronicling how the atomic structure of nanoparticles impacts their function as catalysts in chemical reactions. Catalysts, which play a role in the production of many industrial products, such as fertilizers, fuel, and plastics, are materials that can speed up chemical reactions and make them more efficient while remaining unchanged in the process.

Scientists have known that materials can behave differently at the nanoscale than they do in larger quantities, and that customizing their size and shape can enhance their properties for specific uses. This new technique pinpointed the areas on single metallic particles—which measure about 100 nanometers (100 billionths of a meter)—that are most active in chemical reactions.

Researchers combined a broad spectrum of infrared light, produced by Berkeley Lab’s Advanced Light Source (ALS), with an atomic force microscope to reveal different levels of chemical reactivity at the edges of single platinum and gold nanoparticles compared to their smooth, flat surfaces.

They used a unique capability at ALS, dubbed SINS (for synchrotron-radiation-based infrared nanospectroscopy), to explore the detailed chemistry occurring on the surface of the particles, and achieved resolution down to 25 nanometers.

“It allows you to see all of this interplay in chemistry,” said Michael Martin, a senior staff scientist in charge of infrared beamlines at the ALS. “That’s what makes this special.” 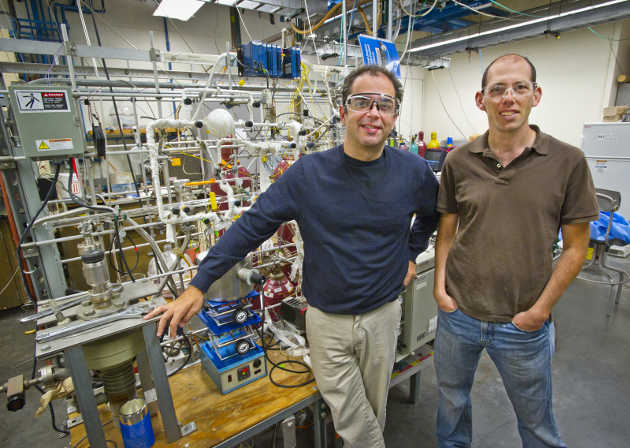 Hans Bechtel, a research scientist at Berkeley Lab who works at the ALS infrared beamlines, added, “You can simultaneously see reactants and the products formed in reactions.”

In the experiment, researchers coated the metallic particles with a layer of reactive molecules and focused the ALS-produced infrared light onto the tiny tip (25 nanometers in its diameter) of the atomic force microscope.

The microscope’s tip, when coupled with the highly focused infrared light, worked like an extremely sensitive antenna to map the surface structure of individual nanoparticles while also revealing their detailed surface chemistry.

“We were able to see the exact fingerprint of molecules on the surface of the particles and validate a well-known hypothesis in the field of catalysis,” said Elad Gross, a faculty member at the Institute of Chemistry and the Center for Nanoscience and Nanotechnology at the Hebrew University of Jerusalem, who led the study along with F. Dean Toste, a faculty scientist in the Chemical Sciences Division at Berkeley Lab and professor in UC Berkeley’s Department of Chemistry.

Knowing the precise level of energy that’s needed to trigger chemical reactions (the activation energy) is key in optimizing reactions, and can reduce costs at the industrial scale by conserving energy use.

“This technique has the ability to tell you not only where and when a reaction occurred, but also to determine the activation energy for the reaction at different sites,” Gross said. “What you have here is a tool that can address fundamental questions in catalysis research. We showed that areas which are highly defective at the atomic level are more active than smooth surfaces.”

This characteristic relates to the small size of the particles, Gross noted. “As the particle size is decreased, the structure is less uniform and you have more defects,” he said.

As the studied chemical reactions occur very rapidly—in less than a second—and the ALS technique can take about 20 minutes to scan a single spot on a particle, the researchers used a layer of chemically active molecules, which were attached to the surface of the particle, as markers for the catalytic reactivity.

Future experiments planned using the SINS technique will focus on documenting active chemical processes that use controlled flows of gases or liquids to trigger reactions, researchers said, and future experiments may use varying pressure and temperature to gauge effects.

“I think this is going to be a very interesting tool for further experiments and analyses that can answer a lot of questions that couldn’t be answered before,” Gross said. “This tool gives us the capability to get better resolution by three orders of magnitude than some other techniques, which has opened a very wide field for catalysis and surface-chemistry studies.”

Future studies could also conceivably combine infrared- and X-ray-based methods at the ALS to gather richer chemical information, researchers said. There are already plans for a new infrared beamline at the ALS that will increase the capacity and capabilities for infrared chemical studies and also launch infrared-based 3-D structural studies at the ALS.