ANN ARBOR — A chemical currently being used to ward off mosquitoes carrying the Zika virus and a commonly used insecticide that was threatened with a ban in the United States have been associated with reduced motor function in Chinese infants, a University of Michigan study found.

Researchers at the U-M School of Public Health and U-M Center for Human Growth and Development tested children in China and found exposure to the chemical naled via their mothers during pregnancy was associated with 3-4 percent lower fine motor skills scores at age 9 months for those in the top 25 percent of naled exposure, compared to those in the lowest 25 percent of exposure. Infants exposed to chlorpyrifos scored 2-7 percent lower on a range of key gross and fine motor skills.

Girls appeared to be more sensitive to the negative effects of the chemicals than boys. 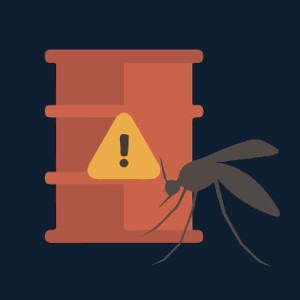 Naled is one of the chemicals being used in several U.S. states to combat the mosquito that transmits Zika. Chlorpyrifos, around since the 1960s, is used on vegetables, fruit and other crops to control pests.

Both are insecticides called organophosphates, a class of chemicals that includes nerve agents like sarin gas. They inhibit an enzyme involved in the nerve signaling process, paralyzing insects and triggering respiratory failure. However, they may adversely impact health through other mechanisms at lower exposure levels that are commonly encountered in the environment.

“Motor delays in infancy may be predictive of developmental problems later in childhood,” said first author Monica Silver, graduate student research assistant and research fellow in the School of Public Health Department of Environmental Health Sciences. “The findings may help inform policy as the debate over use of these chemicals continues.”

The only studies to date on naled health impacts have taken place in occupational settings, not with exposure in the general population, Silver says. Previous chlorpyrifos research has found ties to delayed motor development in children and a host of health issues for those who handle the chemical, including nausea, dizziness and convulsions.

The U-M researchers examined the umbilical cord blood of about 240 mothers, looking for exposure to 30 different organophosphate insecticides, five of which showed up in at least 10 percent of the samples. In addition to naled and chlorpyrifos, they found methamidophos, trichlorfon and phorate.

The cord blood was gathered from 2008-11 as part of a cohort study designed by co-author Betsy Lozoff of the U-M Center for Human Growth and Development to investigate the relationships between iron deficiency and infant neurodevelopment.

The researchers followed the development of the babies using the well-known Peabody Developmental Motor Skill Assessment at 6 weeks and 9 months. No deficits were noted at 6 weeks.

Use of the Peabody tool is unique to this study. Previous research in the environmental health field has primarily relied upon motor portions of larger developmental assessment tools, while this one focused strictly on motor skills, giving a more comprehensive view.

Chlorpyrifos has been banned for residential use in the U.S. since 2000, and for all use in some European countries. In 2015, the Obama Administration proposed a total ban in the U.S. but two months ago the head of the Environmental Protection Agency determined there was not enough scientific evidence to support the action.

While China is the world’s largest user of pesticides, the researchers say exposure to the chemicals is a worldwide concern, especially as the U.S. and other countries brace for another season with the Zika virus.

“Zika is a very serious public health threat. This information helps to highlight that the way we go about combating Zika and other vector-borne diseases needs to be thought out more completely in order to minimize other unintended consequences,” said John Meeker, U-M professor of environmental health sciences who was senior author and principal investigator on the project.

“For example, a focus on a more holistic integrated pest management approach may allow for the same or even improved effectiveness in reducing disease while using smaller amounts of these potentially harmful chemicals.”

Integrated pest management uses education and a range of other tactics to avoid insect infestations (e.g., get rid of standing water near homes), and taking precautions against getting bitten (e.g., avoiding out-of-doors in early morning or after dusk, wearing long-sleeved clothing).

While exposure to chlorpyrifos and other pesticides used on crops is widespread and may be unavoidable in some situations, the research team said consuming organic produce when feasible, and thoroughly washing all fruits and vegetables before eating them can help to reduce exposure.