Early detection is critical for improving cancer survival rates. Yet, one of the deadliest cancers in the United States, lung cancer, is notoriously difficult to detect in its early stages.

In a new clinical study, the analysis technique–called partial wave spectroscopic (PWS) microscopy–was able to differentiate individuals with lung cancer from those without, even if the non-cancerous patients had been lifetime smokers or suffered from chronic obstructive pulmonary disease (COPD).

The findings-released by a team of engineers and physicians from NorthShore University Health System, Northwestern University and New York University-appear in print in the Oct.  15, 2010, issue of the journal Cancer Research.

“This study is important because it provides the proof of concept that a minimally intrusive, risk-stratification technique may allow us to tailor screening for lung cancer, the leading cause of cancer deaths in Americans,” said physician and researcher Hemant Roy of NorthShore University HealthSystems and the University of Chicago, the lead author on the paper. “This represents a major step forward in translating biomedical optics breakthroughs for personalized screening for lung cancer.” 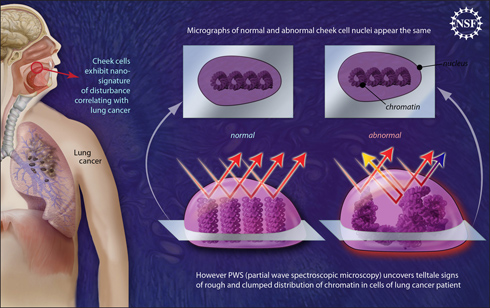 About the image: Nano-scale disturbances in cheek cells indicate the presence of lung cancer. Regular microscopy looking at chromatin, the genetic material inside a cell’s nucleus, will not reveal significant dissimilarities between the cheek cells of a healthy person and those of a lung cancer patient. However, a new technique called partial wave spectroscopic microscopy (PWS) zeroes in on smaller-than-microscopic disturbances at the nano-level, which are harbingers of trouble. Image credit: Zina Deretsky, National Science Foundation

The recent results are an extension of several successful trials involving the light-scattering analysis technique, including early detection successes with pancreatic cancer and colon cancer. NSF has supported the team’s work since 2002, with an early grant to Roy’s collaborator and co-author, bioengineer Vadim Backman of Northwestern University.

“Their work has now transitioned to a larger $2 million Emerging Frontiers in Research and Innovation award,” said Leon Esterowitz, a biophotonics expert and program director at NSF who has long supported the research. “The results have even larger implications in that the techniques and the ‘field effect’ may be a general phenomena that could be applied to a multitude of epithelial cancers, the most common cancer type.”

Within affected cells, including otherwise healthy cells far from an actual tumor, the molecules in the nucleus and cellular skeleton appear to change. On the scale of roughly 200 nanometers or less, even to the scale of molecules, an affected cell’s structure becomes so distorted that light scatters through the cell in a telling way.

The ability of cancer to cause changes in distant, healthy tissue is called the “field effect” or “field of injury” effect, and is the physical mechanism that allows cells in the cheek to reveal changes triggered by a tumor far off in a patient’s lung.

“Microscopic histology and cytology have been a staple of clinical diagnostics detecting micro-scale alterations in cell structure,” added Backman. “However, the resolution of conventional microscopy is limited. PWS-based nanocytology, on the other hand, detects cellular alterations at the nanoscale in otherwise microscopically normal-appearing cells.”

“What is intriguing is that the very same nanoscale alterations seem to develop early in very different types of cancer including lung, colon and pancreatic cancers,” Backman continued. “Not only does this suggest that nanocytology has the potential to become a general platform for cancer screening, but also that these nanoscale alterations are a ubiquitous event in early carcinogenesis with critical consequences for cell function. Elucidating the mechanisms of these alterations will help us understand the initial stages of carcinogenesis and improve screening.”

This research was supported by the National Science Foundation through ten individual grants over the last decade, including CBET-0939778 and CBET-0937987.

Read more about the work in the Northwestern University press release.