People’s moral responses to similar situations change as they age, according to a new study at the University of Chicago that combined brain scanning, eye-tracking and behavioral measures to understand how the brain responds to morally laden scenarios.

Both preschool children and adults distinguish between damage done either intentionally or accidently when assessing whether a perpetrator had done something wrong. Nonetheless, adults are much less likely than children to think someone should be punished for damaging an object, especially if the action was accidental, said study author Jean Decety, the Irving B. Harris Professor in Psychology and Psychiatry at the University of Chicago and a leading scholar on affective and social neuroscience.

The different responses correlate with the various stages of development, Decety said, as the brain becomes better equipped to make reasoned judgments and integrate an understanding of the mental states of others with the outcome of their actions. Negative emotions alert people to the moral nature of a situation by bringing on discomfort that can precede moral judgment, and such an emotional response is stronger in young children, he explained.

“This is the first study to examine brain and behavior relationships in response to moral and non-moral situations from a neurodevelopmental perspective,” wrote Decety in the article, “The Contribution of Emotion and Cognition to Moral Sensitivity: A Neurodevelopmental Study,” published in the journal Cerebral Cortex. The study provides strong evidence that moral reasoning involves a complex integration between affective and cognitive processes that gradually changes with age.

Truth lies in the eyes

For the research, Decety and colleagues studied 127 participants, aged 4 to 36, who were shown short video clips while undergoing an fMRI scan. The team also measured changes in the dilation of the people’s pupils as they watched the clips. 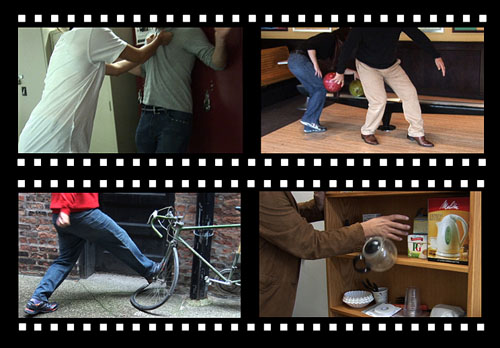 Researchers showed video clips that portrayed intentional and accidental harm, and found that all participants, irrespective of their age, paid more attention to people being harmed and to objects being damaged than they did to the perpetrators. Image courtesy of Jean Decety.

Eye tracking in the scanner revealed that all of the participants, irrespective of their age, paid more attention to people being harmed and to objects being damaged than they did to the perpetrators. Additionally, an analysis of pupil size showed that “pupil dilation was significantly greater for intentional actions than accidental actions, and this difference was constant across age, and correlated with activity in the amygdala and anterior cingulate cortex,” Decety said.

Age changes response in areas of the brain

The study revealed that the extent of activation in different areas of the brain as participants were exposed to the morally laden videos changed with age. For young children, the amygdala, which is associated the generation of emotional responses to a social situation, was much more activated than it was in adults.

In contrast, adults’ responses were highest in the dorsolateral and ventromedial prefrontal cortex — areas of the brain that allow people to reflect on the values linked to outcomes and actions.

In addition to viewing the video clips, participants were asked to determine, for instance, how mean was the perpetrator, and how much punishment should he receive for causing damage or injury.  The responses showed a clear connection between moral judgments and the activation the team had observed in the brain.

“Whereas young children had a tendency to consider all the perpetrator malicious, irrespective of intention and targets (people and objects), as participants aged, they perceived the perpetrator as clearly less mean when carrying out an accidental action, and even more so when the target was an object,” Decety said.

When recommending punishments, adults were more likely to make allowances for actions that were accidental, he said. The response showed that they had a better developed prefrontal cortex and stronger functional connectivity between this region and the amygdala than children. Adults were better equipped to make moral judgments.

“In addition, the ratings of empathic sadness for the victim, which were strongest in young children, decreased gradually with age, and correlated with the activity in the insula and subgenual prefrontal cortex,” which area areas associated with emotional behavior and automatic response to stresses, Decety said. Together, the results are consistent with the view that morality is instantiated by functionally integrating several distributed areas/networks.

The research was supported with a grant from the National Science Foundation. Joining Decety in writing the paper were Kalina Michalska, a postdoctoral scholar, and Katherine Kinzler, an assistant professor, both in the Department of Psychology.