Connections between metabolism and cell stress control may inform study of diabetes, cancer

How our bodies handle glucose—the simple sugar that provides energy from the food we eat—appears to be intertwined with how cells keep themselves functioning normally, according to new University of Chicago research.

The study, published with Scripps Research Institute scientists on Oct. 15 in Nature, found a link between the process that handles glucose in cells and the one that regulates detoxification. This suggests a new understanding of a fundamental function in our bodies, and one that may provide new insights into disorders from cancer to diabetes. 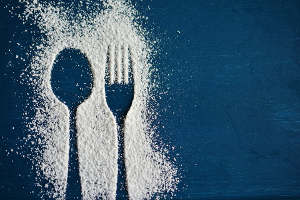 A new study finds a link between the process that handles glucose in cells and the one that regulates detoxification. Image credit: congerdesign (Source: Pixabay)

Raymond Moellering, assistant professor in the Department of Chemistry at UChicago, was trying to tease out the role of a particular molecule involved in the pathway that triggers a cell’s detoxification process—a sort of cleaning crew to remove toxins and buildups when something goes awry in the cell. This pathway turns up when you study all sorts of ailments: cancer, diabetes, inflammatory diseases and neurodegenerative disorders like Alzheimer’s disease.

It appeared that the key protein to trigger this pathway, KEAP1, was being activated by a new small molecule discovered in the lab—but it didn’t appear to be using any of the normal mechanisms known to scientists.

By tracking down the pathways being affected by this molecule, Moellering’s team found that it involved anotherpathway besides detoxification: the pathway that the body uses to process glucose. “Nobody knew those were directly connected,” Moellering said.

How our bodies deal with glucose, which is produced when we break down food for energy, is crucial to virtually all life around the globe—and thus important in many diseases, such as diabetes. Because it’s so ancient and fundamental, it’s also a really difficult pathway to manipulate in the lab. “Unlike a lot of genes or pathways in human cells, you can’t just shut off processes involved in glucose metabolism to see how it connects to other pathways, because if you do the cell dies and the connections are lost,” Moellering said.

Luckily, difficult biological problems are Moellering’s specialty. In most of the techniques for studying biology, scientists can only glimpse snapshots of cell activity—like trying to understand the plot of The Matrix based on a couple of frames out of the entire movie. Moellering’s lab tries to remedy that by developing technology to measure activity and interactions in live cells as it’s happening.

Using a combination of techniques, they found that KEAP1 is actually triggered to action by a buildup of glucose in the cell. “It looks very clearly like KEAP1 is listening to glucose metabolism, and turning on detox mechanisms as a result,” Moellering said.

The strange part was how this happens. Researchers showed that when KEAP1 is exposed to a molecule that is produced during the breakdown of glucose, individual KEAP1 proteins join up in pairs, which then triggers a waterfall of other signals in the cell to begin detoxification mechanisms. Previous methods could not detect how these molecules, proteins and pathways were interacting within the cell.

The discovery is exciting on several levels, Moellering said. This particular pathway is a clue to understanding all kinds of disorders, because detoxification is such an important role in the cell. There’s also a great deal researchers don’t know about glucose, such as how exactly changes in glucose metabolism contribute to complications in diseases, such as nerve damage that accompanies diabetes.

Additionally, the work shows that the cell protects itself from damage by triggering detoxification via glucose metabolism, but pushing this signal too far—as may happen in diseases like diabetes—could lead to damage that exceeds the capacity of the clean-up crew. “For many diseases involving glucose metabolism, it’s intriguing to now ask whether this pathway is involved,” Moellering said.

On another level, this discovery appears to establish a new category of how proteins are controlled in the body. In their quest to understand what happens every day in human cells, scientists know two major ways for proteins to go about their business. One way is for enzymes to place chemical marks on proteins, turning them off and on. The other way is for free-floating molecules in the cell to reversibly interact with proteins to control their functions. This study appears to establish a third way, which is a hybrid of the two—where these free-floating molecules directly form chemical marks on the proteins they interact with, causing specific and longer-lived effects. “Finding this kind of regulation with KEAP1 suggests it is a widespread way to control protein function,” Moellering said.

The discovery suggests new therapeutic possibilities. Pharmaceutical companies are very interested in how to activate and deactivate KEAP1, because it’s key to so many disorders. Previous attempts focused on targeting KEAP1 itself have run into challenges in clinical trials; this new understanding of how metabolism integrates into the pathway may suggest a new mechanism to accomplish the same effect, Moellering said.

The study’s lead authors were Gihoon Lee with UChicago and Michael Bollong from Scripps. Other UChicago co-authors were John Coukos and Jae Won Chang.