It sounds like Shakespearean drama: A male fights to protect his mate after a rival steals her away, using all his cunning and strength to win her back. Yet this encounter played out in the sea between three cuttlefish—the first time such behavior has been filmed in the wild.

The dramatic encounter was filmed in 2011 by Derya Akkaynak of the University of Haifa and Justine Allen, then a PhD student in the Brown University-Marine Biological Laboratory Graduate Program, while diving in the Aegean Sea with Allen’s doctoral research adviser, MBL Senior Scientist Roger Hanlon. The team’s analysis of the cuttlefish combat, with contributions by Alexandra Schnell of the University of Caen, is published in American Naturalist. 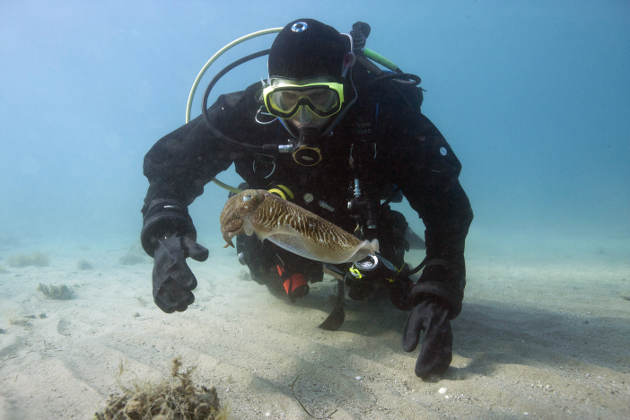 Justine Allen swims with a cuttlefish off the coast of Turkey in the Aegean Sea. Photo by Derya Akkaynak

Hanlon was “ecstatic” when he saw the dive footage. Although researchers have studied cuttlefish competition and mating behavior in the lab, observing the complex interactions of male-male fighting and mate guarding in the wild has been elusive.

“This was a totally serendipitous video sequence that I had been searching for nonstop for 20 years,” Hanlon said.

The encounter began after Allen and Akkaynak filmed a male and female mating and then swimming together, as the male guarded his mate. Suddenly, a second male cuttlefish interrupted the couple’s honeymoon, stealing the female away.

“They have a whole repertoire of behaviors that they use to signal to each other, and we’re just barely starting to understand some of them,” said Allen, now an adjunct instructor at Brown University. “Most of these battles are actually these beautiful, stunning skin displays. It’s a vicious war of colors.”

But when the new male tried to mate with the female, things quickly turned physical.

The two male cuttlefish began grappling and spurting ink, until the first male managed to spin the intruder in three rapid barrel rolls. The harassed intruder slipped free and swam off. Soon after, Hanlon filmed the first male successfully reunited with his mate.

Though this encounter documented just one case of cuttlefish fighting, the team’s analysis and comparison to lab results suggests that the behavior fits the “mutual assessment” model of game theory: Each individual evaluates his next action based on his opponent’s ability and his own ability to prevail, rather than just on his own strength. This is particularly intriguing to Hanlon, who said mutual assessment requires more cognitive ability.

Hanlon said the analysis through game theory is an important step in studying aggression, which while widespread in the animal kingdom, remains poorly understood.

“Aggression is a major part of many societal problems, but it’s a very touchy subject,” Hanlon said. “This field observation and game theory analysis sets up a way to do lab experiments differently. I’m hoping we can put animals in the tank [to study aggression] based on this field assessment.”