WASHINGTON — Earth’s largest inland body of water has been slowly evaporating for the past two decades due to rising temperatures associated with climate change, according to a new study led by The University of Texas at Austin.

Water levels in the Caspian Sea dropped nearly 7 centimeters (3 inches) per year from 1996 to 2015, or nearly 1.5 meters (5 feet) total, according to the new study. The current Caspian sea level is only about 1 meter (3 feet) above the historic low level reached in the late 1970s. The study was published Aug. 29 in Geophysical Research Letters, a journal of the American Geophysical Union (AGU) 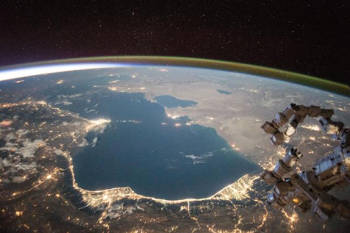 The Caspian Sea as seen from the International Space Station in 2015. A new study finds water levels in the Caspian Sea dropped nearly 7 centimeters (3 inches) per year from 1996 to 2015. The current Caspian Sea level is only about 1 meter (3 feet) above the historic low level it reached in the late 1970s. Photo credit: Scott Kelly/NASA-JSC.

Increased evaporation over the Caspian Sea has been linked to increased surface air temperatures. According to the study, the average yearly surface temperature over the Caspian Sea rose by about 1 degree Celsius (1.8 degrees Fahrenheit) between the two timeframes studied, 1979-1995 and 1996-2015. These rising temperatures are probably a result of climate change, said the study’s authors. Evaporation brought about by warming temperatures appears to be the primary cause of the current drop in sea level, and the decline will probably continue as the planet warms.

“From our point of view as geoscientists, it’s an interesting place because it’s possible to construct a sort of budget for the total amount of water that’s there,” said Clark Wilson, a geophysicist with UT’s Jackson School of Geosciences and the study’s co-author. “The real control that causes it to go up and down over long periods of time is really most likely the evaporation, which is almost completely dominated by temperature.”

The Caspian Sea, located between Europe and Asia, is about the size of Montana at 371,000 square kilometers (143,244 square miles). It has experienced substantial changes in its water level during the past several hundred years, but previous studies were unable to nail down the exact causes of the changes.

The Caspian Sea is bounded by five countries and contains an abundance of natural resources and diverse wildlife. The sea also contains oil and natural gas reserves and is an important resource for fisheries in the surrounding countries.

The new study began after Wilson and Jianli Chen, the study’s lead author from The University of Texas at Austin Center for Space Research, used the Caspian Sea to calibrate data from the twin satellites of the GRACE mission, launched in 2002. By comparing measurements of the Caspian Sea from GRACE data and Earth-based measurements, the researchers helped improve the satellite data’s accuracy. In doing so, they noticed the Caspian Sea’s water levels were undergoing significant changes.

“Once we got through with [the calibration], Jianli Chen said, ‘Well, you know, this is very curious. Why is this changing so much?’ ” Wilson said.

The researchers looked at the three primary influences on Caspian Sea water levels: water from rivers that drain into the sea, precipitation and evaporation.

They compiled information about water level changes observed by satellites, records of precipitation and drainage into the sea from rivers, and estimations of precipitation and evaporation from climate models. The researchers then assembled a record of how much each of these factors contributed to observed changes in the Caspian sea level from 1979 to 2015.

Evaporation contributed to about half of that decline; the combined effects of precipitation and river discharge changes contributed to the other half. According to the study, the observed evaporation rates are associated with increased surface air temperature and other climate factors such as surface humidity and wind.

The new study provides the first convincing evidence that increased evaporation over the Caspian Sea is a more important driving force of Caspian sea level change than river discharge or precipitation, said Anny Cazenave, a CNES space geodesist at the Laboratoire d’Etudes en Géophysique et Océanographie Spatiales at Observatoire Midi-Pyrénées in Toulouse, France, who was not involved in the study.

Evaporation will have the biggest impact on the northern portion of the Caspian Sea because much of the water in that area is less than 5 meters (16 feet) deep, Wilson said. If the current trend of a 7-centimeter decrease per year continues at a steady rate, it would take about 75 years for the northern part of the sea to disappear, according to the new study.

Wilson said the next step in this research is to project future changes in Caspian sea level using climate models. Although this study identified the trends in sea level and their causes, the researchers did not project specific estimates of how these levels might change in the future.

The full version of this news release appears on AGU’s site.