EAST LANSING, Mich. — Canola can now be grown profitably in Michigan, thanks to Michigan State University.

Canola, which has potential as biofuel and cooking oil, is considered a high-value crop with seeds comprised of more than 40 percent oil. When compared to soybeans, which have 18 percent oil, and corn, which yields a mere 4 percent, canola stood out to MSU researchers as a key crop to help boost Michigan’s economy.

In 2008, MSU launched the Canola Project. The effort brought together farmers, biofuel production experts, and MSU professors and extension agents to help establish Michigan as one of the nation’s leaders in this field. By exploring the production and refinement of canola oil, the initiative aims to lessen dependence on foreign oil and strengthen Michigan’s rural economies.

Working with Michigan farmers, Dennis Miller, chemical engineering professor, and Russ Freed, crop and soil scientist, oversaw multiple test plots to find the best varieties and the best seasons to plant. Research efforts have resulted in varieties that can be grown in winter and spring.

“The MSU Canola Project’s initial focus was on growing canola for biofuels,” said Miller, who along with Freed, is an MSU AgBioResearch scientist. “But when the cost of our oil was about $4 per gallon, we knew it was too high, so for now we have transitioned our efforts to food oil.” 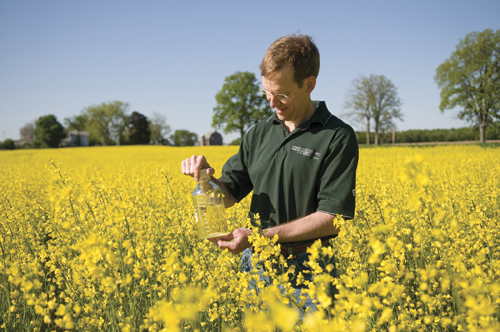 Historically, nearly all of the 1.5 billion pounds of canola cooking oil consumed in the United States have been imported. One of the challenges of producing the oil locally was having a processing plant in Michigan. In 2008, MSU purchased a canola press, which has the capacity of pressing one ton of canola per day.

Dan Blackledge, canola grower and entrepreneur from Marion, Mich., planted 120 acres of canola this year. This summer, Blackledge began marketing B&B Farms canola oil. His first pressing was small, about 50 gallons. But it represents the first offering of canola oil grown and commercially produced in Michigan.

“I wouldn’t be growing canola today if it weren’t for MSU and the research and support they provided,” Blackledge said. “It has been and continues to be an immensely helpful partnership. The land-grant model is a beautiful thing.” 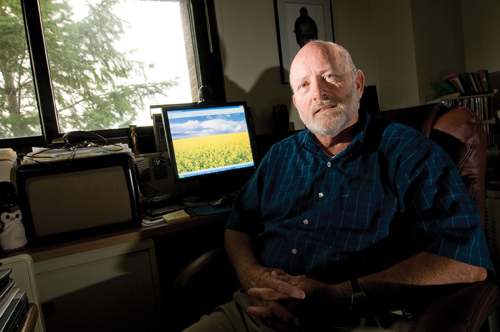 Future research efforts will focus on increasing the acreage of canola being grown in Michigan, increasing cooking oil production and exploring options to improve the efficiency of biofuel production.