Jake Whittenberg gazed across the vast tundra of data in his Excel spreadsheet – a fairly lifeless accounting of the rousing retail market now fueled by legal marijuana in Washington state.

The reporter and anchor with KING-TV in Seattle had gathered reams of government numbers revealing revenues churned and taxes collected on state cannabis sales. That financial engine has spurred lawmakers to repeatedly ask: Why not use the pot windfall to pay for public schools?

But the raw figures were complex and confusing. If Whittenberg, a journalist since 2004, struggled to parse them, he knew viewers would too. He then ingested those stats into Microsoft Power BI, a data visualization tool. Finally, with the facts revealed and a misconception exposed, he saw the story.

“We found that it’s a myth that no marijuana money goes to public education,” Whittenberg says. “In 2018, $80 million went to the state general fund, which helps pay for education. And while retail marijuana sales are in the billions, that’s still a drop in the bucket compared to the overall state budget.

“In a world where white noise can easily dominate the landscape and the news, this is an opportunity to give viewers a fact-based perspective on an issue in a way that is undeniable. Numbers don’t lie,” he adds. 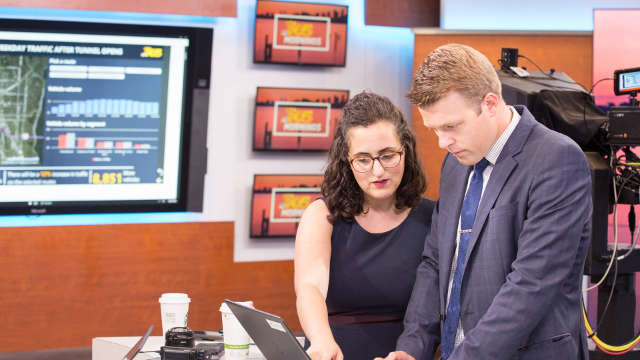 Those revelations were gleaned through KING’s data journalism pilot, a summer project that produced 13 broadcast and web-based news reports exploring issues ranging from congressional fundraising to the wild fire frequency to the orca population in Puget Sound.

The pilot’s mission followed one of the highest principles of TV news: unraveling crucial if not complicated topics to offer easy-to-understand stories that help local viewers better understand their world.

Among the team, however, the initiative has stoked even loftier ambitions, such as refreshing broadcast journalism, rejuvenating the business model of TV news and bolstering audience trust. An August survey by the Poynter Institute found 24 percent of respondents had little or no confidence in local TV news while 45 percent carry those opinions about network TV news.

“There is this notion that fake news is everywhere,” Whittenberg says. “Data can enrich and authenticate a story to make sure you know the news is legitimate.”

“They are taking a fundamentally new approach to broadcast storytelling,” says Ben Rudolph, managing director of the Microsoft Modern Journalism Program. His team coached KING on how to develop data visualizations. “They’re not just going to tell you the story; they’re going to show you how they used real data to reach their conclusions.”

The pilot emerged from a larger modernization effort led by KING’s owner, TEGNA, a Virginia-based broadcast and digital media company that operates more than 40 TV stations across the United States.

“The TV audience, by its very definition, is looking for visual storytelling,” Walker says. “Using graphics and traditional, reporter-driven techniques to explore data, we believe, can build audience across all platforms, especially on digital.

“The challenge is developing a data-driven mindset among KING journalists and, more importantly, developing efficient ways to get data stories on air,” Walker adds.

Nurturing a newsroom culture that routinely pumps out public records requests for data-mining projects is core to Mirfendereski’s journalistic philosophy, she says. Her stories, typically in-depth and analytical, appear on the KING website and on air.

She produced a September piece reporting that most Washington schools fail to meet state vaccination targets for students. For her reporting, she sifted through state health data then analyzed and created visual representations of those numbers with help from Power BI and experts from Revel Consulting, a Microsoft partner.

Initially, the KING team expected to spot varying immunization rates among different demographic groups, such as people or families who earn more or less money than average. Turned out, that angle didn’t exist. Instead, Mirfendereski uncovered the immunization-rate lapses at certain schools – voids that can cause more kids to get sick in the event of an outbreak.

“Having an awareness of how to use data in stories will make people better journalists,” Mirfendereski says. “You might find one interesting number in a giant spreadsheet that can be a major story. If you don’t think that way, you can get lost by the overwhelming nature of a spreadsheet.”

“What we’re doing with data journalism and Power BI,” Whittenberg says, “is what investigative reporters have been doing for years – stacks of public records requests to your waist, burning the midnight oil – only we can do that much faster now. It puts us ahead of the game.”

What’s more, by posting their interactive graphics online, KING gives its viewers the opportunity to play with and assess the data on their own time.

It is time itself that seems to be the most important element of all. Squeezing more from work hours and resources has never been more necessary in the news business, Rudolph says. There’s more news to cover yet not enough reporters to cover it.

Local TV stations across America have streamlined staffs and trimmed costs as cord-cutting gained traction and social media sites replaced, for some consumers, traditional news outlets. At newspapers, meanwhile, newsroom employment in the U.S. has dropped from 74,000 journalists in 2006 to 39,000 in 2017 as that sector’s aging economy struggles to evolve, according to the Pew Research Center.

“Jake and Taylor are not just anchors reading the news,” Rudolph says. “They learned fundamentally new skills that maximize their time and value to the community and to the company. They’re modernizing their careers and the stories they’re telling.

“By enabling viewers to actually dig through that data themselves also helps close the trust gap in news,” Rudolph adds. “Solving the trust gap is key to growing your audience, and in turn, audience growth will help to solve the revenue gap.

Stronger revenues mean more resources, which lead to more impactful storytelling – a virtuous cycle that can put the news industry back on a healthy path, Rudolph adds.

“The focus group feedback, along with audience measurements on broadcast and digital, will inform a longer discussion about how to boost data journalism and data visualization at stations throughout the TEGNA network,” Walker says.

At KING, producers and editors are now carving out more time for journalists to work on data stories, Walker says. Meanwhile, the partnership between KING, Microsoft and Revel Consulting has produced a playbook that documents the process, workflows and technology so that other journalists can learn from the KING pilot.

“That was one of our goals,” Whittenberg says. “We wanted to find a model that could support the kind of storytelling and the kind of journalism that, frankly, we need to get back to.”