COLUMBIA, Mo.—Raptors, or birds of prey, some of which are endangered species, typically live in environments that provide natural land cover, such as forests and grasslands. Protecting endangered raptor species helps maintain food chain balance and prevents overpopulation of common raptor prey, such as snakes and rodents. As more businesses are built on the edges of urban areas, land where raptors once lived becomes industrialized, which raises concerns about the consequences of habitat destruction on raptor populations. Now, University of Missouri researchers have found that businesses can contribute to raptor preservation efforts by engaging in less development of lawn areas and increased planting or preservation of native grasslands and woodlots.

“Greater amounts of cleared and developed space, such as lawn and pavement, around these businesses have negative effects on raptor presence,” said Charles Nilon, professor of fisheries and wildlife at the MU College of Agriculture, Food and Natural Resources. “In areas with more natural land cover of tall grass, woodlands and tree cover, we saw a higher number of raptors. Simply adding certain trees and leaving tall grass can attract this wildlife.” 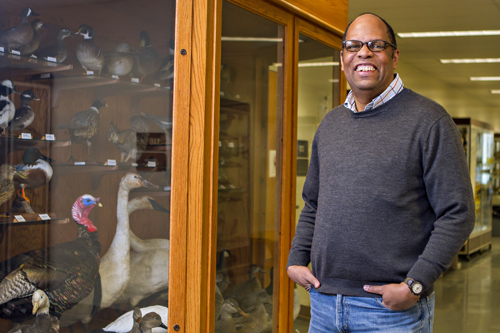 Charles Nilon, a professor of fisheries and wildlife at the MU College of Agriculture, Food and Natural Resources, found that businesses can contribute to raptor preservation efforts by engaging in less development of lawn areas and increased planting or preservation of native grasslands and woodlots. Image credit: Kyle Spradley

“Raptors avoid business parks with large areas of pavement and lawns because they can’t find food, protection and nesting areas in these open spaces,” Nilon said. “We found that for each five percent increase in lawn cover, the number of raptors decreased by 12 percent. Urban businesses can contribute to raptor conservation efforts by planning and preserving grassland and woodlots, and by leaving lawn areas undeveloped.”

Hogg and Nilon found that a surprising number of raptors have adapted to some business parks. During the course of the study, he detected 224 birds and eleven different raptor species. In addition, at least two sites showed evidence of nesting.

“Smaller areas of non-lawn habitat throughout the property, or on the edges of a business park, are adequate to increase the presence of these birds,” Nilon said. “Retaining natural habitat on the edges of the development, on slopes, or along streams contributes to biodiversity in the urban landscape with virtually no impact on the usefulness of the property.”

Nilon said that many national and international corporations have initiated habitat improvement programs on their properties, and that research shows employees also often prefer these more natural landscapes. The Wildlife Habitat Council and the British Trust for Ornithology, for example, report that a diverse wildlife population improves employee morale and encourages better relations with local communities.

Hogg and Nilon’s study, “Habitat association of birds of prey in urban business parks,” recently was published in Urban Ecosystems. Jonathan Hogg, a graduate student in the MU School of Natural Resources, also participated in the research.