COLLEGE PARK, Md. – Unexpected new findings by a University of Maryland team of geochemists show that some portions of the Earth’s mantle (the rocky layer between Earth’s metallic core and crust) formed when the planet was much smaller than it is now, and that some of this early-formed mantle survived Earth’s turbulent formation, including a collision with another planet-sized body that many scientists believe led to the creation of the Moon.

“It is believed that Earth grew to its current size by collisions of bodies of increasing size, over what may have been as much as tens of millions of years, yet our results suggest that some portions of the Earth formed within 10 to 20 million years of the creation of the Solar System and that parts of the planet created during this early stage of construction remained distinct within the mantle until at least 2.8 billion years ago.” says UMD Professor of Geology Richard Walker, who led the research team. 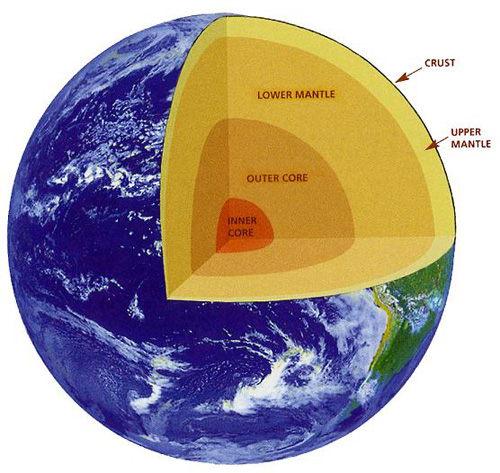 Prior to this finding, scientific consensus held that the internal heat of the early Earth, in part generated by a massive impact between the proto-Earth and a planetoid approximately half its size (i.e., the size of Mars), would have led to vigorous mixing and perhaps even complete melting of the Earth. This, in turn, would have homogenized the early mantle, making it unlikely that any vestiges of the earliest-period of Earth history could be preserved and identified in volcanic rocks that erupted onto the surface more than one and a half billion years after Earth formed.

However, the Maryland team examined volcanic rocks that flourished in the first half of Earth’s history, called komatiites, and found that these have a different type of composition than what they, or anyone, would have, expected. Their findings were just published in the journal Science: “182W Evidence for Long-Term Preservation of Early Mantle Differentiation Products,” by Mathieu Touboul, Igor S. Puchtel, and Richard J. Walker, University of Maryland. Their laboratory and work are supported by funding from the National Science Foundation and NASA.

“We have discovered 2.8 billion year old volcanic rocks from Russia that have a combination of isotopes of the chemical element tungsten that is different from the combination seen in most rocks — different even from the tungsten filaments in incandescent light bulbs,” says the first author, Touboul, a research associate in the University of Maryland’s Department of Geology. “We believe we have detected the isotopic signature of one of the earliest-formed portions of the Earth, a building block that may have been created when the Earth was half of its current mass.” 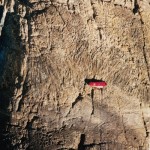 Photograph of a complete section of a komatiite lava flow that solidified on an ocean floor 2.82 billion years ago. Komatiites can provide extremely valuable evidence of the distant geological past of our planet. Photo Credit - Igor Puchtel, UMD

As with many other chemical elements, tungsten consists of different isotopes. All isotopes of an element are characterized by having the same number of electrons and protons but different numbers of neutrons. Therefore, isotopes of an element are characterized by identical chemical properties, but different mass and nuclear properties. Through radioactive decay, some unstable (radioactive) isotopes spontaneously transform from one element into another at a specific, but constant, rate. As a result, scientists can use certain radioactive isotopes to determine the age of certain processes that happen within the Earth, as well as for dating rocks.

For the Maryland team the tungsten isotope182-tungsten (one of the five isotopes of tungsten) is of special interest because it can be produced by the radioactive decay of an unstable isotope of the element hafnium, 182-hafnium.

According to the UMD team, the radioactive isotope 182-hafnium was present at the time our Solar System formed, but is no longer present on Earth today. Indeed, decay of 182-hafnium into 182-tungsten is so rapid (~9 million year half-life) that variations in the abundance of 182-tungsten relative to other isotopes of tungsten can only be due to processes that occurred very early in the history of our Solar System, they say. 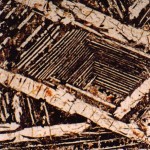 Photomicrograph of a small, thin section of komatiite lava. The "spinifex texture" is a hallmark and considered unequivocal evidence of their ancient origin as molten rock extruded from deep in the Earth. Photo Credit - Igor Puchtel, UMD

The Maryland geochemists found that the 2.8 billion year old Russian komatiites from Kostomuksha have more of the tungsten isotope 182-W than normal. “This difference in isotopic composition requires that the early Earth formed and separated into its current metallic core, silicate mantle, and perhaps crust, well within the first 60 million years after the beginning of our 4.57-billion-year-old Solar System,” says Touboul.

“In itself this is not new,” he says, “but what is new and surprising is that a portion of the growing Earth developed the unusual chemical characteristics that could lead to the enrichment in 182-tungsten; that this portion survived the cataclysmic impact that created our moon; and that it remained distinct from the rest of the mantle until internal heat melted the mantle and transported some of this material to the surface 2.8 billion years ago, allowing us to sample it today.”

The UMD team explained that they were able to conduct this research because they have developed new techniques that allow the isotopic composition of tungsten to be measured with unprecedented precision. “We do this by chemically separating and purifying the tungsten from the rocks we study. We then use an instrument termed a mass spectrometer to measure the isotopic composition of the tungsten” 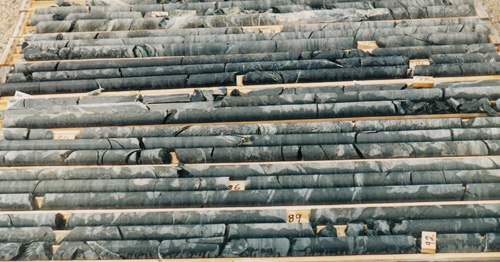 Komatiite drill core obtained via drilling a hole through a sequence of komatiite lava flows. The technology allows us to obtain and document fresh rock material from horizons located as deep as several miles below the Earth's surface, which otherwise would be inaccessible for scientists. Photo Credit - Igor Puchtel, UMD

According to the researchers their new findings have far reaching implications for understanding how Earth formed; how it differentiated into a metallic core, rocky mantle and crust; and the dynamics of change within the mantle.

“These findings indicate that the Earth’s mantle has never been completely melted and homogenized, and that convective mixing of the mantle, even while Earth was growing, was evidently very sluggish,” says Walker. “Many questions remain. The rocks we studied are 2.8 billion years old. We don’t know whether the portion of the Earth with this unusual isotopic composition or signature can be found in much younger rocks. We plan to analyze some modern volcanic rocks in the near future to assess this.”