COLUMBIA, Mo. – The skulls of alligators protect their brains, eyes and sense organs while producing some of the most powerful bite forces in the animal kingdom. The ability to bite hard is critical for crocodilians to eat their food such as turtles, wildebeest and other large prey; therefore, their anatomy is closely studied by veterinarians and paleontologists who are interested in animal movements and anatomy.

Now, researchers at the University of Missouri and the University of Southern Indiana have developed three-dimensional models of the skull of the American alligator using cutting-edge imaging and computational tools. The researchers validated their simulations using previously reported bite-force data proving their accuracy. These models also can assist scientists in studying the origins and movements of extinct species and other animals.

“Collecting bite data from live animals like alligators can be pretty dangerous and potentially deadly, so accurate 3-D models are the best way for biomechanists, veterinarians, and paleontologists interested in the function and evolution of these amazing animals to study them,” said Casey M. Holliday, associate professor of pathology and anatomical sciences in the MU School of Medicine. “It is impossible to analyze the bite forces in extinct hard-biting species like the giant Cretaceous crocodile Deinosuchus, or the famous bone-crunching dinosaur Tyrannosaurus rex, so precise models are imperative when studying extinct species.” 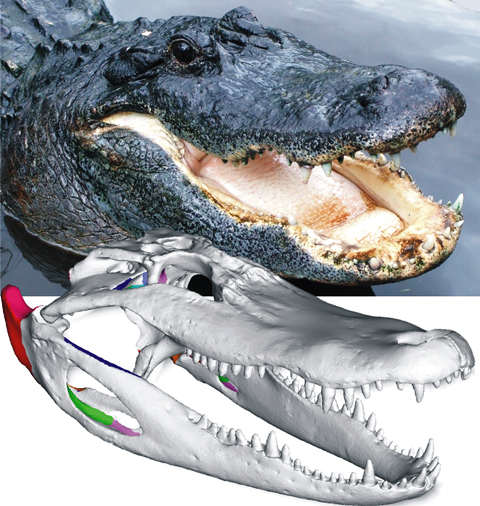 Casey Holliday and his team developed three-dimensional models of the skull of the American alligator using cutting-edge imaging and computational tools. Image credit: University of Missouri

The team’s approach was to first report naturalistic, three-dimensional computational modeling of the jaw muscles that produce forces within the alligator skulls to better understand how bite forces change during growth. Then, they compared their findings to previously reported bite forces collected from live alligators.

“Because alligators and crocodilians have had such extreme feeding performance for millions of years, they have been a popular topic of study for paleontologists and biologists,” said Kaleb Sellers, a doctoral student in Holliday’s lab. “Our models stand out because we’re the first to distribute loads of their huge muscles across their attachment surfaces on the alligator skull. This lets us better understand how muscle forces and bite forces impact the skull.”

These new methods and findings pave the way to better understanding the 3-D biomechanical environment, development and evolution of the skull of not only alligators, but other crocodilians, birds, dinosaurs and other vertebrates, Holliday said.

The study, “Ontogeny of bite force in a validated biomechanical model of the American alligator,” recently was published in the Journal of Experimental Biology. Research was funded by the University of Missouri Research Board, Missouri Research Council, the National Science Foundation (Grants: IOS 1457319 and EAR 163753) and the Department of Pathology and Anatomical Sciences. The content is solely the responsibility of the authors and does not necessarily represent the official views of the funding agency.Co-authors on the study include Kevin Middleton, an associate professor in the MU Department of Pathology and Anatomical Sciences; and Julian Davis, an associate professor of engineering at the University of Southern Indiana.