PROVIDENCE, R.I. [Brown University] — Thanks to a grant from the National Science Foundation (NSF) to a Brown University professor, a high-flying new robotics curriculum is coming to high schools across Rhode Island.

The curriculum teaches students the basics of robotics in the process of building and programming their own autonomous aerial drones. It was originally developed as a college class by Stefanie Tellex, a computer science professor at Brown. The NSF grant, along with some funding from Amazon, enabled Tellex to adapt the curriculum for high schoolers and provide schools at no cost with the drone parts needed to teach it. This past summer, Tellex trained teachers from 10 Rhode Island schools to teach the course, with the hope that each school will offer it this fall.

“There’s something about flight that captures the imagination,” she said. “The idea here is to use that excitement to introduce students to robotics and artificial intelligence, which can seem a little daunting at first. But these autonomous drones are really good for teaching the basics in a fun way, and we think it’s a great way to get kids interested in STEM.” 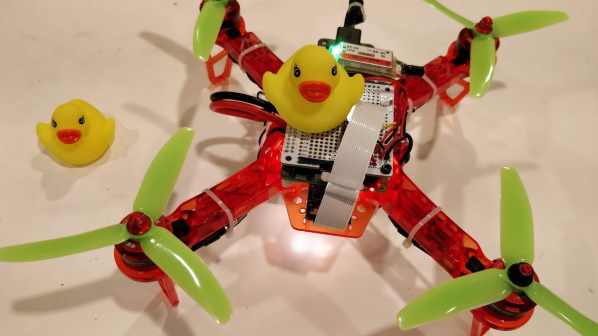 By learning to assemble and program this simple little drone, high school students across Rhode Island will get an introduction to the field of robotics. Image credit: Brown University

The new curriculum is a partnership with Duckietown, an existing robotics education initiative that uses simple, ground-based robots. The new aerial addition to the Duckietown curriculum  is dubbed DuckieSky.

The DuckieDrone was first developed by Tellex and a group of undergraduates at Brown a few years ago, and Tellex began using the drones to teach introductory robotics in 2017. The drones themselves are small and fairly simple, which Tellex says is by design. She wanted a platform that would be safe and inexpensive, but still sophisticated enough to teach key concepts.

Each quad-rotor drone is equipped with a camera and a small computer processor called a Raspberry Pi. In addition to assembling the drone’s physical parts, students learn how to program the drone to be able to fly on its own. That involves algorithms that help the drone figure out where it is in space and adjust its flight path accordingly. Students also learn key concepts related to safety, networking and communications.

“One of the key things in robotics is the interaction between the hardware and the software,” Tellex said. “These drones are a great way to bring that all together in a really tangible way.”

Rick Simard, a computer science teacher at Mount Saint Charles Academy in Woonsocket who participated in the training last month, said he’s excited to bring the curriculum to his school.

“What this will mean to our students is beyond words,” Simard said. “Computer science was once thought to be the future, however, it is no longer the future, it is the ‘now.’ This drone program covers the entire STEM program, and is a great addition to our growing CS offerings.”

A group of nine Brown undergraduate students, along with students from other colleges, who are alumni of a drone program piloted at the Providence Career & Technical Academy,  played a key role in helping train teachers, and plan to help out during the school year when the instruction begins.

“I can’t say enough good things about the Brown students who have been involved in this,” said Diane Silva Pimentel, director of the Master of Arts in Teaching program at Brown. “These students have taken their passion for robotics and are using it to bring more people into that world. The program is fostering tremendous engagement for these students.”

One of those students is Dev Ramesh, who worked on the project this summer as part of an Undergraduate Teaching and Research Award (UTRA) from Brown. Ramesh, a rising junior computer science concentrator, is thinking about a future career in academia, which makes this a golden opportunity for him.

“I have been given the opportunity both to develop the curriculum that we then used to train teachers, and to learn from these teachers about producing and implementing holistic and goal-driven lessons,” Ramesh said. “I believe that my understanding of academic teaching has tremendously improved due to both of these factors, and if I do end up going into academia, this UTRA has set up the foundations for my future success.”

Tellex says she looks forward to seeing a curriculum she’s worked on for years put into action for high school students.

“It’s so exciting to empower a group of students with a flying robot and help them on their journey in the path of STEM,” she said. “Our goal is to provide another entry point into STEM that will engage a diverse group of students into autonomous robotics.”