Breathing New Life into the Study of Asthma

The UA’s Dr. Fernando Martinez wants to know why children on Amish farms are healthier, and his research could have far-reaching implications.

Dr. Fernando Martinez’s first childhood memory was one of awaking in the middle of the night to find his mother suffering an asthma attack. His father, a physician, quelled the flare-up with a nebulizer.

But this attack would not be her last. Martinez would witness many more.

Today, Martinez, a physician and researcher, is trying to pinpoint asthma’s genetic and environmental origins in hopes of finding treatments that prevent people from developing the disease. His efforts are one of the stories to watch from the University of Arizona as 2016 begins.

“We want to know what factors in early life determine whether you develop the disease,” says Martinez, a UA Regents’ Professor of Pediatrics and director of the Arizona Respiratory Center. 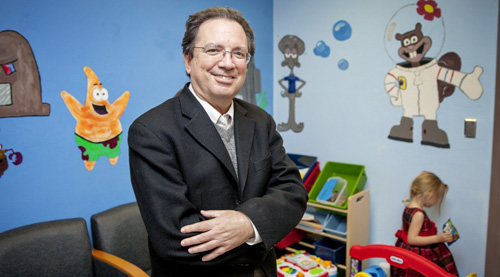 Dr. Fernando Martinez, director of the Arizona Respiratory Center, says he was affected by asthma attacks suffered by his mother when he was a child. (Photo credit: John de Dios/UANews)

Asthma affects 24 million Americans and causes breathlessness, chest tightness, wheezing, coughing and in extreme cases death, according to the Centers for Disease Control and Prevention.

What’s more, the disease is becoming more prevalent in westernized countries. Researchers know that genetic makeup plays a role in its onset. However, studies also suggest that environmental influences are the only possible explanation for its rise.

With that in mind, Martinez and his colleagues are studying two U.S. farming populations, the Indiana Amish and the South Dakota Hutterites. The Hutterites live on large, communal farms, employ modern farming technology and live separately from their farm animals. Meanwhile, the Indiana Amish live on single-family farms, use horses for work and transport, and live in close contact with their farm animals.

As it happens, the proportion of Amish children suffering from asthma is lower than the Hutterite children, at 5.2 percent versus 15 percent.

“Their (the Amish’s) barns are very close to where the homes are,” Martinez says. “You feel the presence of the farm. The animals are that close to the home. The Amish use animals for almost everything, so almost everything is done like it was done 150 or 200 years ago.

“So what you have are these two traditional communities except for the way they farm, but the Hutterites have the same prevalence of asthma that we have in the rest of United States whereas the Amish have practically no asthma. (The communities) are in fact genetically very similar to one another. So what we have concluded is that it’s the exposure to the close contact with the animals that is associated with protection.”

But now, Martinez says, we try to raise children in the most aseptic way — that is, with the least possible contact with bacteria, in particular the bacteria related to animal waste.

“Rightfully so, we fear that some of those bacteria could be very dangerous for the child,” Martinez says. “The problem is that only a very small proportion of bacteria that we are in contact with in the environment are truly dangerous. There’s bad and good bacteria in the environment, but we have eliminated our contact with the good bacteria, the ones that have allowed us to train our immune system.

“In the same way that we have to learn to deal with cold and warmth and people, we have to learn how to cope with who is the enemy. Otherwise, there are so many billions of bacteria, we would be constantly fighting them, even those that aren’t going to do anything bad to us. So, what we want to do in the future is train the body to recognize foe from friend.”

Which is why Martinez and colleague Donata Vercelli are analyzing dust from Amish farms to determine what component in the dust protects against asthma.

“We are studying that dust in collaboration with Shane Snyder, who can separate the products that are within a certain sample,” Martinez says.

Snyder, a UA professor of chemical and environmental engineering, is “an artist in taking a sample and dividing it into its different components,” Martinez says. “If we could find that component (that protects against asthma), we could use it in people to prevent the development of asthma.”

Likewise, Martinez and his colleagues are beginning a clinical trial this year in which they will give babies naturopathic products, which contain dead parts of bacteria that are associated with farms, to see if those substances imitate the preventative effects of specific components of dust found on Amish farms.

“We believe within the next five years we will have the results of this big clinical trial but also of the studies that are determining which dust particles protect against asthma,” Martinez says.

“We can’t go back to living around animals as we did 100,000 years ago, but maybe we can find out what is protective about them.”