The area of the brain that plays a primary role in emotional learning and the acquisition of fear – the amygdala – may hold the key to who is most vulnerable to post-traumatic stress disorder.

Researchers at the University of Washington, Boston Children’s Hospital, Harvard Medical School and Boston University collaborated on a unique opportunity to study whether patterns of brain activity predict teenagers’ response to a terrorist attack.

The team had already performed brain scans on Boston-area adolescents for a study on childhood trauma. Then in April 2013 two bombs went off at the finish line of the Boston Marathon, killing three people and injuring hundreds more. Even people who were nowhere near the bombing reported distress about the attack and the days-long manhunt for the suspects. 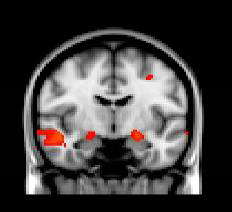 Amygdala activation (shown in red) in the left hemisphere of the brain was associated with PTSD symptoms following the Boston Marathon bombing. Image credit: Kate McLaughlin

By using functional Magnetic Resonance Imaging scans from before the attack and survey data from after, the researchers found that heightened amygdala reaction to negative emotional stimuli was a risk factor for later developing symptoms of PTSD.

The research study was published July 3 in the journal Depression and Anxiety.

“The amygdala responds to both negative and positive stimuli, but it’s particularly attuned to identifying potential threats in the environment,” said McLaughlin, the study’s first author. “In the current study of adolescents the more their amygdala responded to negative images, the more likely they were to have symptoms of PTSD following the terrorist attacks.”

The brain scans were conducted during the year prior to the bombing. At that time, the teens were evaluated for their responses to emotional stimuli by viewing neutral and negative images. Neutral images included items such as a chair or button. Negative images showed people who were sad, fighting or threatening someone else. Participants rated the degree of emotion they felt while looking at each image. The MRIs measured whether blood flow increased to the amygdala and the hippocampus when viewing negative images as compared to neutral images.

In the follow-up survey the teens were asked whether they were at the finish line during the bombing, how much media exposure they had after the attack, whether they were part of the lockdown at home or school while authorities searched for the suspects, and how their parents responded to the incident. They also were asked about specific PTSD symptoms, such as how often they had trouble concentrating and whether they kept thinking about the bombing when they tried not to.

Researchers found a significant association between amygdala activation while viewing negative images and whether the teens developed PTSD symptoms after the bombing.

McLaughlin said a number of previous studies have shown that people with PTSD had heightened amygdala responses to negative emotions, but researchers didn’t know whether that came before or after the trauma.

While two-thirds of Americans will be exposed to some kind of traumatic event during their lifetime, most, fortunately, will not develop PTSD.

“The more we understand the underlying neurobiological systems that shape reactions to traumatic events, the closer we move to understanding a person’s increased vulnerability to them,” McLaughlin said. “That could help us develop early interventions to help people who might develop PTSD later.”

Other co-authors are Andrea Duys, of UW; Daniel Busso and Sonia Alves at Harvard; and Jennifer Greif Green at Boston University. The research was funded by the National Institutes of Health.