Brain Parasite Not Your Typical Invader

UA researcher Anita Koshy has received two grants to study how Toxoplasma infection affects the brain’s immune response, and also how it manipulates the neurons with which the parasite interacts.

For most people, the idea that their brain may be infected with a microscopic parasite isn’t exactly cause for celebration.

But University of Arizona researcher Anita Koshy suspects that the parasite Toxoplasma gondii, which resides in an estimated one-third of the global population, may have neuroprotective effects. 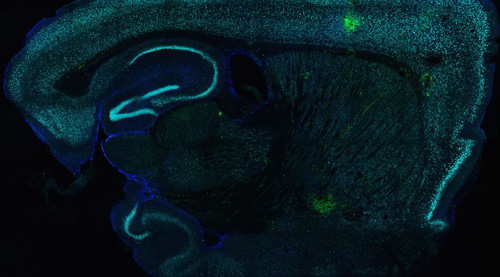 A stitched-grid image of a brain section from a transgenic mouse infected with Toxoplasma-Cre parasites. All green cells have been injected by parasite with parasite-Cre fusion protein, allowing the Koshy lab to track which cells in the brain interact with parasites. (Photo by: Anita Koshy)

Koshy, a member of the BIO5 Institute who has her lab in BIO5, has received a three-year, $225,000 grant from the Arizona Biomedical Research Commission to study how Toxoplasma infection affects the brain’s immune response, as well as a two-year, $150,000 grant from the March of Dimes (Basil O’Connor grant) to understand how Toxoplasma directly manipulates the neurons with which the parasite interacts.

Koshy hopes the lab’s efforts will lead to a greater understanding of Toxoplasma’s effect on the brain and on neuroinflammation, a process implicated in the pathophysiology of Alzheimer’s and stroke.

This work may even lead to new treatments.

“Using Toxoplasma provides a unique opportunity to understand the fundamental biology of the brain’s immune response and how it might be manipulated,” said Koshy, an assistant professor in the UA Department of Neurology and Department of Immunobiology. “It can tell us a lot about inflammation in the brain.”

Toxoplasma gondii occupies a unique position in the pantheon of parasites. Although it’s capable of causing a lifelong infection called toxoplasmosis in nearly all species of warm-blooded animals, it rarely produces symptoms in healthy adults. This suggests that Toxoplasma and the mammalian central nervous system have co-evolved to avoid triggering a powerful immune response that could destroy them both, allowing the parasite to persist throughout the host’s life.

However, in people with weakened immune systems, such as unborn infants and HIV patients, toxoplasmosis can wreak havoc in the central nervous system, causing severe illness and even death.

Interestingly, recent studies suggest that in humans, like mice, infection with different strains of Toxoplasma may result in different outcomes for the infected, which led Koshy to question how the parasite was really interacting with its host. 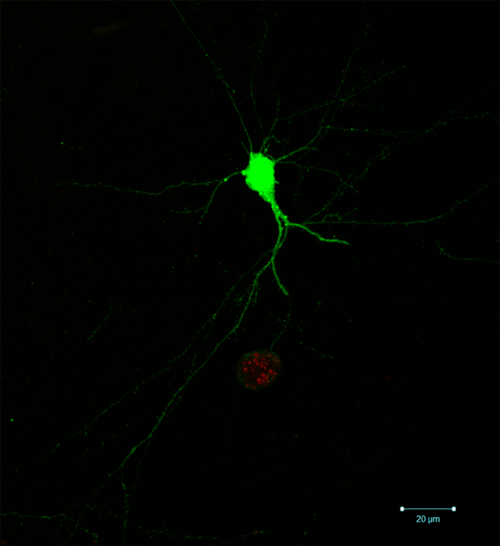 “In early mouse studies, other groups found that Type 1 parasites kill all mice, Type 3 parasites kill almost no mice and Type 2 infections were someplace in between,” Koshy explained. “These strain-specific differences have led to a number of key findings in acute virulence. In addition, one or two older studies also suggested that Type 2 and Type 3 strains produced strain-specific differences in the brain’s immune response. These findings suggested that we could use classical genetics, as has been done for acute virulence, to understand how different Toxoplasma strains provoke different brain immune responses.”

To address this question, Koshy helped develop a system to visualize areas in the brain where Toxoplasma infections were occurring.

Dubbed the Toxoplasma-Cre system, Koshy’s team engineered parasites to inject an enzyme called Cre-recombinase into host neurons that it infects. The result is Toxoplasma-infected neurons that glow fluorescent green, allowing the scientists to pinpoint exactly when and where infection occurs and track it over the long term. By performing experiments using different strains of Toxoplasma, Koshy hopes to learn why some infections cause severe illness and others don’t.

“It could be that we are seeing strain-specific immune responses, which is mediated at the level of those green cells,” Koshy said. “If we can understand why two different strains are producing two different outcomes, we might be able to intervene.”

For Koshy, the biggest mystery was why so many infected people display no symptoms.

“In some situations, toxoplasma is really pathogenic,” she said. “But someplace between one-eighth and one-third of the world is chronically infected, and the majority of them are completely fine.”

Toxoplasma’s peculiar ability to alter immune responses and inflammation in the brain could be leveraged to combat inflammatory disease.

To test this idea, Koshy and her team are evaluating cognition and behavior in mouse models of Alzheimer’s disease with toxoplasmosis, and using the Toxoplasma-Cre system to identify resulting changes in the brain. Previous work has implicated toxoplasmosis in relieving some Alzheimer’s symptoms, and Koshy remains hopeful.

“Microbes have a remarkable ability to find or develop mechanisms for survival that we might never come up with otherwise,” Koshy said. “Understanding these mechanisms gives us the potential to define new targets for treating Alzheimer’s disease.”

Despite high rates of Toxoplasma infection around the world, Koshy emphasized that there is no need for people to worry about rushing to get tested.

“Since there’s currently no cure for chronic toxoplasmosis, a positive diagnosis may cause more stress than good,” she said. “Besides, it may even be protecting your brain.”