There’s a new wave of sound on the horizon carrying with it a broad scope of tantalizing potential applications, including advanced ultrasonic imaging and therapy, and acoustic cloaking, levitation and particle manipulation. Researchers with the U.S. Department of Energy (DOE)’s Lawrence Berkeley National Laboratory (Berkeley Lab) have developed a technique for generating acoustic bottles in open air that can bend the paths of sound waves along prescribed convex trajectories.

Sound waves move much like light waves. They travel on a straight path but this path – through reflection, diffraction or refraction – can be bent. This is the basis for ultrasound medical imaging and non-destructive testing of materials. An intense search has been underway in recent years to develop techniques that can bend the paths of sound waves along a curved trajectory so as to meet the more stringent demands of super high-resolution imaging, acoustic cloaking and other exotic applications. Artificial nanoconstructs known as “metamaterials” have been engineered that can bend sound waves sufficiently but the nature of these materials places limits on their applications, especially for biological purposes. 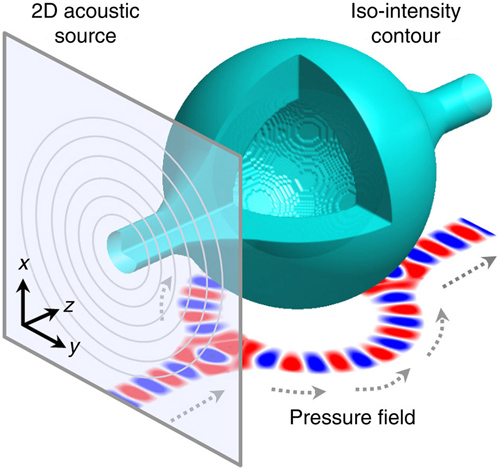 “We need to find ways to bend acoustic wave fields without depending on the use of a highly engineered medium,” says Xiang Zhang, director of Berkeley Lab’s Materials Sciences Division. “With our bottle beam technique, we can design and synthesize acoustic bottles that are capable of directing sound waves along paths of desired curvature through homogeneous space without the need of metamaterials or any other highly engineered medium.”

Zhang, who also holds the Ernest S. Kuh Endowed Chair Professor at the University of California (UC) Berkeley, directs the National Science Foundation’s Nano-scale Science and Engineering Center, and is a member of the Kavli Energy NanoSciences Institute (ENSI) at Berkeley. He and his group have gained international acclaim for research involving the manipulation of light and sound that has yielded some extraordinary results – an invisibility cloaking device, a plasmonic Airy beam that curves light, the world’s first acoustic hyperlens, a four-dimensional crystal that will keep perfect time forever, and much more.

In this latest project, three members of Zhang’s research group, Peng Zhang, Tongcang Li and Jie Zhu, created an acoustic “bottle” that features a three-dimensional curved shell, in which a wall of high acoustic pressure surrounds a null pressure region in the middle. Sound waves forming the bottle are concentrated into a beam that travels through the high pressure wall of its curved shell. The sound waves are generated by an array of loud speakers, 1.5 centimeters in diameter and spaces 2.5 centimeters apart, operating at a frequency of 10 kilo Hertz (kHz) and can be launched along a designated trajectory by precisely adjusting the phase profile of the speaker array.

“Since the principle of adjusted phased arrays is well-established and now being used in ultrasound imaging, we can directly apply our acoustic bottle beam technique to current acoustic systems,” says Peng Zhang, lead author of a paper in Nature Communications that described this work. (See below for details). “Our technique offers a new degree of freedom for controlling the flow of acoustic energy at will.”

Because the high pressure wall of the acoustic bottle exerts a pulling force, there are no sound waves passing through the null pressure interior of the bottle and the bottle can be used for acoustic trapping. Furthermore, the bottle beam is not influenced by any obstacle placed inside the bottle and can even restore itself when an obstacle blocks its path, as the researcher demonstrated with a steel rod.

“Our acoustic bottle beams open new avenues to applications in which there is a need to access hard-to-reach objects hidden behind obstacles, such as acoustic imaging and therapeutic ultrasound through inhomogeneous media,” co-author Li says. “We can also use an acoustic bottle as a cloaking device, re-routing sound waves around an object and then recovering them in their original form, making the object invisible to sonar detection.”

Acoustic bottle beams might also serve another application that ranks among the hottest in the high-tech community these days – acoustic levitation, in which sound waves are used to lift and manipulate millimeter-sized objects, including particles, microorganisms and droplets of water. A recent study reporting the use of standing sound waves for 3D graphic printing was hailed as a major breakthrough.

“Our acoustic bottle beams can do the same thing but offer better stability, true 3D graphics, and more freedom of motion as our beam can propagate along a curved path,” co-author Zhu says. “We can also levitate much larger 3D objects than can be lifted and manipulated with other acoustic levitation techniques.”

Sui Yang, another co-author of the Nature Communications paper and member of Zhang’s research group, notes that the trapping capability for objects larger than the half-wavelength offered by acoustic bottle beams may also add important new tools for material-related studies.

“These giant acoustic traps could lead to new technologies and devices for a variety of applications in chemistry, materials, as well as biosciences,” he says. “For example, by creating this three-dimensional bottle-like acoustic trap, we could use it as a micro-chemical reactor and manipulation of biological trafficking devices.”

This research was supported by the Office of Naval Research’s MURI program.