AUSTIN, Texas — Current and proposed border fences pose significant threats to wildlife populations, with those animals living in border regions along the Texas Gulf and California coasts showing some of the greatest vulnerability, a new study from The University of Texas at Austin shows.

“Our study is the first comprehensive analysis of threats to species across the entire U.S.-Mexico border,” says Jesse Lasky, a graduate student in the laboratory of Tim Keitt, associate professor of integrative biology. “The scale at which these fences stretch across the landscape is large, so it’s important for us to also have a large-scale view of their effects across the continent.”

Among the species at risk include four species listed as threatened globally or by both the U.S. and Mexico, and another 23 with small range sizes. The animals include the Arroyo toad, the California red-legged frog and the jaguarundi. 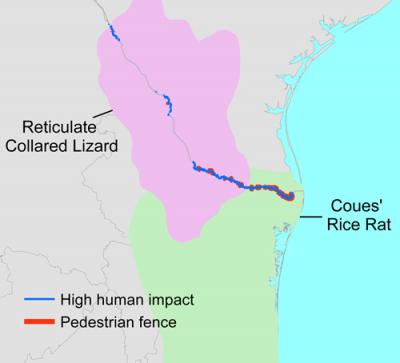 Coues' Rice Rat and Reticulated Collared Lizard are both Texas threatened species. Coue's Rice Rat occurs in Texas at the edge of its range and has most of its border range occupied by areas of high human impact and pedestrian fences. Reticulated Collared Lizards were identified as a species that would be at risk if extensive barriers were built across its range in the future. Image credit: Jesse Lasky, The University of Texas at Austin.

“We were able to identify a list of animal species that are most at risk and should be prioritized and monitored for change,” says Lasky. “We’re hoping this helps point decision-makers toward the animals to look at first when making priorities for conservation.”

Most at risk of extinction are smaller populations of wildlife that occur in more specialized habitats, the study shows. Even animals that may appear to have large ranges may live in isolated habitats within those ranges that can be heavily disturbed by border fences. Human population growth along the border also poses threats to the wildlife.

Lasky says when the ranges of these animals are separated by barriers, including border fences and roads, the animals’ ability to move is limited. The isolated populations are then more vulnerable to unforeseen disturbances, such as a hurricane or fire, which can wipe out an entire population. The isolation also increases inbreeding depression, which means the animals have limited opportunities to mix their genes with others and accumulate harmful mutations. 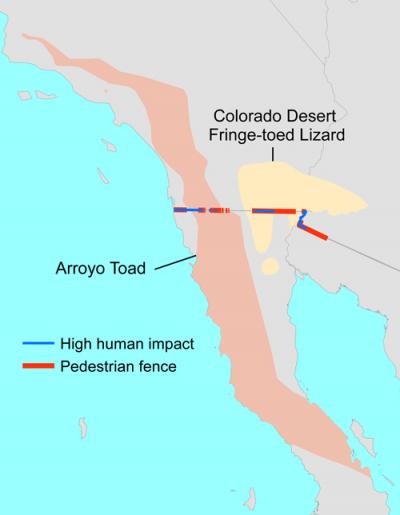 The California border region has many threatened species, species with small ranges, and human-created barriers to animal migration. Lasky et. al. highlight two species at risk, the Arroyo Toad, which is federally endangered, and the Colorado Desert Fringe-toed Lizard, which is a federal species of concern. Image credit: Jesse Lasky, The University of Texas at Austin

The study analyzed the ranges of 313 non-flying mammals, reptiles and amphibians and identified three major regions where wildlife is most vulnerable: the high human population areas of coastal California and coastal Texas and the unique “sky island” Madrean archipelago habitat in southeastern Arizona.

These regions have high numbers of vulnerable species. Some species in California have barriers that block as much as 75 percent of their ranges.

The U.S. Department of Homeland Security is waived from environmental regulations when building security infrastructure. There are about 750 miles of border fences and human migration barriers along the border.

The study, by Lasky, Keitt and coauthor Walter Jetz, an associate professor in the Department of Ecology and Evolutionary Biology at Yale University, appeared May 3 online in the journal Diversity and Distributions.