Blue of Every Hue

The compelling story of indigo, the world’s oldest, most magical and best-loved dye has been brought to life by an Honorary Research Fellow from the University of Exeter’s Institute of Arab and Islamic Studies.

Jenny Balfour-Paul’s accumulation of over twenty year’s research on the subject of indigo has taken her around the world and resulted in a book, titled Indigo: Egyptian Mummies to Blue Jeans.

The book is the definitive study of the dye behind blue denim. It is the story of a commodity that has been central to international trade and textile production for centuries, across time and cultures. 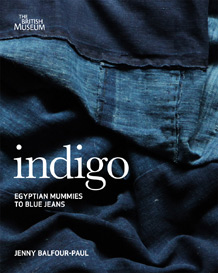 Produced from plants by a process akin to alchemy, indigo has a unique chemistry that renders it compatible with all natural fibres. It was also indispensable for creating a magnificent range of colours when combined with other natural dyes. From the time of the ancient Egyptians it made an incredible impact worldwide as the world’s only source of blue of every hue.

Jenny Balfour-Paul was a practicing dyer in the 1980’s and accompanied her late husband, a Research Fellow at the University of Exeter, to Yemen when he was organising an academic conference for the then Arabic Department. Whilst in Yemen she learnt that the indigo industry had been a major industry for centuries but was about to die out.

Balfour-Paul explained: “I applied for a grant so I could return to Yemen and record as many stories and information about the process of indigo and its importance since biblical times as I could. This initial survey led to similar research throughout the Arab world. When the British Museum Press heard about this work they asked me if I would continue the research worldwide for a book called ‘Indigo’.”

The classic study has been reissued with a new final chapter, which examines the dye from all angles: the historical, agricultural and botanical origins of the different plant sources; the production and dyeing methods, commerce and economics; and various patterning techniques as well as indigo’s continued presence in folklore, art and alternative medicine.

Indigo: Egyptian Mummies to Blue Jeans arose directly out of Jenny Balfour-Paul’s PhD at the University of Exeter, which was on ‘Indigo in the Arab World’ (subsequently published by RoutledgeCurzon).

She added: “Since I wrote the first books there has been a renewed interest in natural indigo and revivals in many countries, due to environmental concerns. I was also co-curator of Manchester University’s Whitworth Art Gallery major 2007 touring exhibition ‘Indigo, A Blue to Dye For’, and consultant for the newly released American documentary film ‘Blue Alchemy: Stories of Indigo’. In 2009 I became a partner in ‘Silk Road Connect’, a fascinating educational initiative launched in New York by cellist Yo Yo Ma’s Harvard based Silk Road Project after Ma selected indigo as an ideal educational model to link the arts and sciences.’