*For his discoveries about the lives and deaths of stars, the exotic physics of black holes and the origin of chemical elements, UA Regents’ Professor David Arnett has been honored with the Henry Norris Russell Lectureship.*

What happens when a star dies? How does a black hole form? What makes the chemical elements that form the building blocks of stars, planets and living beings?

Those are the kinds of questions that have fascinated David Arnett, a Regents’ Professor at the University of Arizona’s Steward Observatory, from an early age. 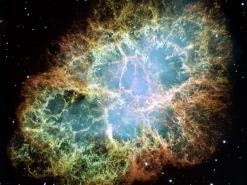 The Crab Nebula is the aftermath of a supernova observed by Arab, Chinese and Japanese astronomers in 1054 A.D. Located about 6,500 light years from Earth, the nebula spans 11 light years. Still spinning at its center is what is left of the star: an ultra-dense neutron star. (Photo: NASA)

A theoretical physicist and a pioneer in the field of complex simulations, Arnett worked with the first supercomputers in the 1960s to unravel some of the greatest mysteries of the universe: how stars forge chemical elements in their cores and seed the universe when they blow up as supernovae, and how some of them turn into bizarre cosmic phenomena such as neutron stars or black holes.

In honor of his lifetime contributions, Arnett has received the Henry Norris Russell Lectureship from the American Astronomical Society, or AAS, an honor that he shares with other scientists of the caliber to have had telescopes or buildings named after them. Only two other UA researchers – Lunar and Planetary Lab founder Gerard Kuiper and former Steward Observatory Director Bart Bok – have received this recognition.

In one of his most significant achievements, Arnett predicted stellar explosions now identified with type IA supernovae. While some stars simply fizzle out when they run out of nuclear fuel, slowly cooling off by radiating what is left of their energy into the cold universe over billions of years, others end their existence in the most spectacular way imaginable: torn apart in the most violent explosions known in the universe: supernovae.

“Type IA supernovae are basically cosmic firecrackers,” Arnett said. “They are caused by stars more massive than our sun but not massive enough to collapse to form a neutron star or a black hole. Other types of supernovae involve such a collapse.” 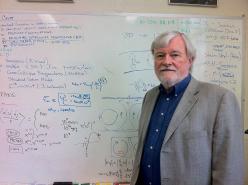 Arnett’s simulations revealed that type IA supernovae go through a highly consistent sequence of events, a feat that has made them invaluable to astronomers trying to get a grip on the distances of objects such as stars and galaxies and the speeds at which they move away from each other in the expanding universe.

Because their brightness curve follows a predictable pattern, scientists came to rely on type IA supernovae as cosmic yardsticks, marking distances in the universe like candles lighting the way into an unknown stretch of darkness.

“The ultimate goal of these simulations is to better understand how stars collapse. We do not know what the range of variation is, because we don’t know what happens to their spin as they contract.”

He pointed out that the results apply not only to dying stars but to pulsating stars, too.

“The implications are very broad,” he said, “and I love that because I’m basically a physicist at heart. I love to use physics to understand what stars do. And the amazing thing is, it’s working.”

Less than two years ago, Arnett helped discover yet another unknown type of supernova by performing calculations that explained the puzzling distributions of chemical elements in the supernova remnant, the “smoking gun” of the stellar explosion.

Arnett, who grew up in rural Kentucky, found himself fascinated with stars at an early age and spent much of his time growing up with his eye pressed to the viewfinder of his telescope in the backyard.

“I have always been fascinated with the stars and the universe, although I don’t really remember when it started,” he said. “I remember my cousin and I were writing science fiction stories when we were in the fourth grade.”

A book by renowned English astronomer Fred Hoyle – who is credited with coining the term “Big Bang” – advertised in an issue of Scientific American when Arnett was in high school would provide the initial spark for a life-long career studying the lives and deaths of stars.

“It was a popular book but fairly well packed with physical insight,” he said. “And Fred’s writing style was very clear. My family for many years had been teachers, and I wanted to be a scientist.”

After receiving his bachelor’s of science in physics at the University of Kentucky in 1961, Arnett gained entrance – as a “gamble” as he put it – to Yale University for graduate school.

“I say ‘gamble’ because I was from Kentucky, and you don’t know many hillbilly astrophysicists,” he said with a chuckle.

Arnett, who knows how to play banjo and guitar – bluegrass and classical style – has hardly ever used a telescope to study the physics of cosmic phenomena because he “preferred staying up late to party instead of staying up late to observe,” as he put it, adding that the Kellogg Lab parties at Caltech were memorable.

Instead, he has relied on mathematical equations and supercomputers to simulate the extremely complex events going on inside stars during their lifetime and when they end their existence.

It turns out that all the heavier elements in the universe, such as iron, carbon and oxygen, and other ingredients that make up planets, rocks and living creatures, owe their existence to dying stars. Forged under the immense pressures of a collapsing stellar core, it takes the cataclysmic explosion of a supernova to seed the universe with those elements and create new worlds and ultimately, life forms.

Studying the fluid dynamics inside stars, Arnett discovered that those flow patterns are “primarily determined by the same mechanisms that cause the flows in the atmosphere or the oceans.”

“It’s all physics,” he said. “So there is an enormous overlap. And if you write down the equations, you can get results that apply to a lot of particular different venues, not just stars.”

Before he joined the UA almost 25 years ago, Arnett was a faculty member at the University of Chicago.

“I loved the university, but living in the inner city was a challenge for me and my family,” he said. “We were in love with the desert southwest. There are not many places you can go that are active in astronomy. And this was one. “

Of his time at the UA, he said: “Probably the best thing has been my recent research, which I have done with my last three graduate students in this department.”

“It’s involved with three dimensional simulation of turbulent flow inside stars and that is the problem we have to solve if we want to understand how the angular momentum is distributed, the spin. Now, with astroseismology and space telescopes COROT and Kepler, we actually can look inside stars. Spin increases as stars contract, and is vital to understanding how neutron stars and black holes form.

About his field of research, Arnett said, “It has been a wonderful field to work in because it has been blossoming for the last 50 years, and it’s very international. In a time when our country in so many respects is getting so insular, it’s wonderful to be working with colleagues scattered across the globe. I consider that an enormous benefit for a boy that grew up in farming country.”