Cut your toe, and platelets — those disc-shaped cells circulating in your blood — rush to the scene, clumping together to plug the leak.

But when an unwanted clot forms in an artery, and an overaccumulation of platelets blocks blood flow, a heart attack or stroke occurs, too often with fatal results.

Heart disease and stroke rank as humankind’s top killers, according to the World Health Organization. Ulhas Naik, director of the Delaware Cardiovascular Research Center at the University of Delaware, hopes to help change that grim statistic for the better.

For the past several years, Naik has been leading a research team in the UD Department of Biological Sciences focused on learning more about a protein in blood called junctional adhesion molecule A (JAM-A), which is found on the surface of platelets. Naik actually purified and cloned this protein 24 years ago when he was a postdoctoral researcher.

Although a number of different proteins in blood have been shown to slow clot formation, JAM-A is a far more powerful clot inhibitor, Naik and his research team have discovered.

He and his colleagues recently reported their findings in Blood, the flagship journal of the American Society of Hematology. The authors included UD research scientist Meghna Naik and the University of Pennsylvania’s Timothy Stalker, research assistant professor, and Dr. Lawrence Brass, professor of medicine. The research is featured on the journal’s cover and also is highlighted in a commentary by Jonathan M. Gibbins of the University of Reading in England.

“The JAM-A protein is the natural protection against unwanted clot formation,” Naik says. “It is not the only protein in blood with this role, but other proteins are not as strong or as good.”

A split-screen video, produced with the aid of an intravital microscope, provides compelling evidence of JAM-A’s importance. On the left, scientists can see a blood clot rapidly form and then decrease in size when JAM-A is present. On the right, in the absence of JAM-A, a clot forms and continues to grow unchecked. 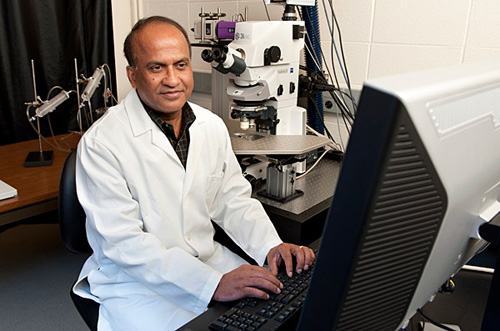 Previously, scientists thought JAM-A actually stimulated platelets to form clots. Now that UD research has shown the opposite to be true, the next step, Naik says, is to determine what the actual mechanism is.

Naik keeps in mind a common scenario described by a local cardiologist. Two patients with heart disease will visit the cardiologist with the same symptoms. The two patients will receive the same treatment, yet one patient will live and one will die from a heart attack. Could the patients’ level of JAM-A be the critical difference between life and death, Naik wonders. 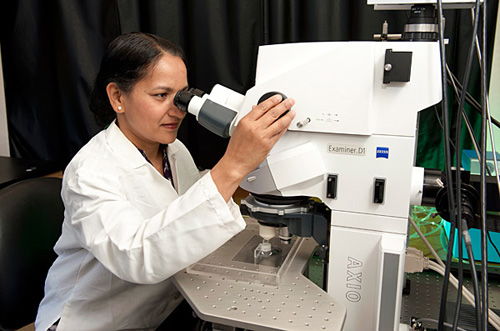 Meghna Naik, research associate in the UD Department of Biological Sciences, was the lead author of the study, recently published in the journal "Blood." She is shown at the intravital microscope at UD, which enables scientists to view and image living cells and systems in real time at very high resolution. Only a small number of the high-tech tools are available in the U.S. Besides cardiovascular research, the intravital microscope can be used for studies of cancer, obesity, neuroscience and other biomedical fields. Photo by Kathy F. Atkinson

Plaque lines the arteries of patients with atherosclerosis like a fur coat. Sometimes, when chunks of these soft plaques break off, platelets rush to the scene to form clots.

“The JAM-A protein moderates blood clotting,” Naik notes. “If it’s not there, a clot keeps on growing. If people have less JAM-A, then that may be an important biomarker for predicting who is at greatest risk of a heart attack or stroke and taking steps to prevent it.”

The research was supported by grants from the National Institutes of Health through the National Heart, Lung, and Blood Institute and the former National Center for Research Resources.