Today’s cataract surgery is often described as a marvel of modern medicine, a one-hour outpatient procedure that has spared millions from blindness, especially in developed countries.

But nothing is perfect.

“Modern cataract surgery is one of the most miraculous human health innovations,” said Melinda Duncan, professor of biological sciences at the University of Delaware. “It has completely revolutionized eye care and has greatly reduced the incidence of blindness around the world.

“As with any surgery, there are side effects.”

Duncan conducts research into those side effects — both short term and long term — and is seeking ways to prevent what is called “secondary cataract” that can occur years after a successful surgery. Her research also explores the makeup of cells in the lens of the eye and the way surgery affects them. 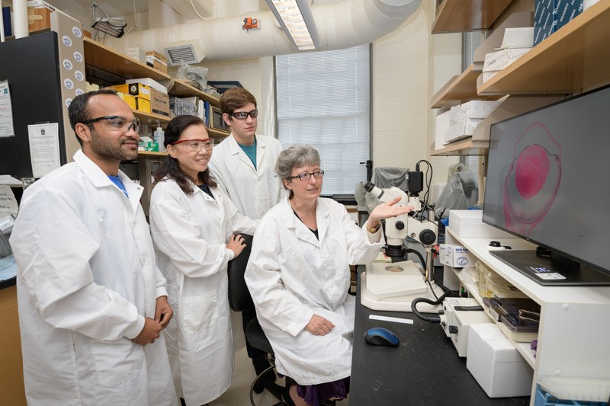 Cataracts occur when the lens of the eye becomes cloudy, a process that develops over time and is commonly related to aging. Eventually, individuals with a cataract in one or both eyes feel as if they are looking at the world through a dirty window.

The surgical procedure removes that clouded natural lens through a tiny incision and replaces it with a clear, flexible plastic lens. The surgery and the artificial lenses have been steadily improving, Duncan said, leading to better and better vision for patients.

“But some lens cells always remain behind after surgery,” she said. “And that can form scar tissue, which isn’t transparent.”

Some 40-to-70 percent of patients will develop this scarring in the eye, which will often interfere with their vision. Occurring as long as 10 years after the original surgery, the condition is known as posterior capsular opacification (PCO), sometimes termed “secondary cataract.”

“Most people who develop PCO are fine with a further treatment, but others are at risk for additional problems,” including damage to their retinas, Duncan said. “It’s much better to prevent PCO in the first place.”

Her research on this issue has been continuously funded by the National Eye Institute (NEI), a division of the National Institutes of Health (NIH), since 2004, and the institute recently awarded her a four-year grant renewal for the project of $1.37 million. Duncan said her research team has already discovered several molecules that are critical for the formation of PCO scar tissue.

“We hope to identify clinical interventions to block this potentially blinding condition,” she said. “That’s what we’re working on now — a drug that would shut this process down.”

In another active research project, initiated with support from both a Shovel-Ready Pilot Grant from the Delaware Center for Translational Research and a dual core access award from Delaware INBRE (the IDeA Network for Biomedical Research Excellence), Duncan is investigating the mechanisms that operate immediately after cataract surgery to trigger PCO.

In researching that process, Duncan made a novel discovery, finding that the lens cells left behind after surgery produce molecules that may be the primary triggers for post-surgical eye inflammation.

This was important because doctors prescribe general anti-inflammatory eye drops to be used in the days after cataract surgery to prevent pain and damage to the retina. The finding also relates to PCO, as inflammation is known to drive scar tissue formation in other organs. This work opens up the possibility that the exact cause of inflammation could be determined, allowing for a more targeted therapy to be used in the future, Duncan said.

“Normally in the eye, lens cells are completely walled off from the immune system and have no resemblance to immune cells,” she said. “But it turns out that an injury to the lens, such as surgery, changes that. The data really surprised us because this was completely unknown before.”

These findings are the focus of a recent paper published by Duncan’s group in the journal Investigative Ophthalmology and Visual Sciences.

The recently published research on injured lens cells as mediators of inflammation led this work to be supported by both a second recent grant from the NEI, a four-year award of $1.53 million, as well as $46,800 in additional funding to expand the scope of the work to investigate how age affects this process.

Duncan is a professor of biological sciences at UD, as well as director of the Education and Professional Development Core of Delaware INBRE and associate director of the Center for Biomedical Research Excellence (COBRE) in Discovery of Chemical Probes and Therapeutic Leads.

She is an editorial board member of Investigative Ophthalmology and Visual Sciences and a trustee of the Association for Research in Vision and Ophthalmology.

Duncan earned her doctorate at the University of Medicine and Dentistry of New Jersey, Robert Wood Johnson Medical School and Rutgers University. She conducted postdoctoral research at the National Eye Institute.