ANN ARBOR, Mich.—The black hole at the center of the galaxy is to blame for sling-shotting “hypervelocity stars” out of the Milky Way at up to 1.8 million miles per hour, according to new evidence from research involving a University of Michigan astronomer.

Hypervelocity stars, discovered about five years ago, are the fastest stars astronomers have ever observed. They are escaping the galaxy at beyond what was thought to be its stellar speed limit.

The researchers used the Hubble Space Telescope to trace the trajectory and origin of HE 0437−5439, a speeding star in the southern hemisphere too faint to be seen with the naked eye. A paper about their findings has been accepted to Astrophysical Journal Letters. 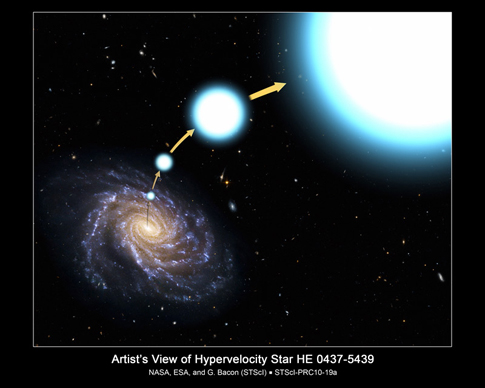 About the image above: In this illustration, the hot, blue star HE 0437-5439 has been tossed out of the center of our Milky Way galaxy with enough speed to escape the galaxy’s gravitational clutches. The stellar outcast is rocketing through the Milky Way’s distant outskirts at 1.6 million miles an hour, high above the galaxy’s disk, about 200,000 light-years from the center. The star is destined to roam intergalactic space. Image credit: NASA, ESA, and G. Bacon

“This is the first objective evidence that these hypervelocity stars do come from the center of the galaxy,” said Oleg Gnedin, an assistant professor in the U-M Department of Astronomy. “It’s an example of a very violent interaction that happens as a direct consequence of the black hole there.

“We had theorized that you could only get such high velocity if you kick a star from very close to a black hole in a special way that involves another star or object. It’s a three-body interaction. The black hole rips apart a binary or tertiary star system, captures one of the companions and jettisons the others.”

Tracking hypervelocity star paths across the sky could help astronomers map the shape and gravitational potential of our galaxy and its dark matter halo, Gnedin said. Dark matter is a substance that astronomers cannot directly observe, but they deduce it exists because they detect its gravitational effects on visible matter.

“Theoretical models predict that the dark matter halo should be watermelon-shaped, not completely round. The longer side of the halo would pull the star away from its original path, and with additional accurate measurements we can detect that pull and reconstruct the halo shape,” Gnedin said. “However, if we find the halo to be perfectly round, our accepted models would be in trouble.” 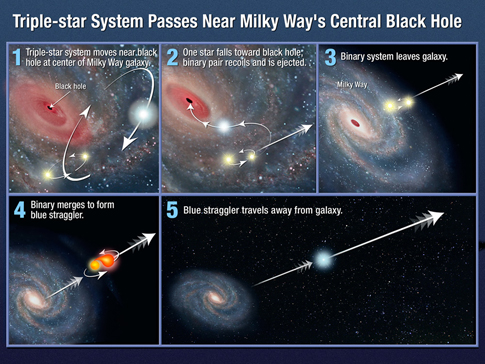 About the image above: This illustration shows one possible mechanism for how the star HE 0437-5439 acquired enough energy to be ejected from our Milky Way galaxy. Image credit: NASA, ESA, and A. Feild (STScI)

At about 500 miles per second, HE 0437−5439 is moving about four times as fast as the Sun moves through space. Astronomers estimate that it took 100 million years for it to get from the Milky Way’s center to where it is now, about five times farther out than most stars.

Because of this timeframe, some scientists previously thought that a central Galactic origin was impossible. Based on the size and composition of HE 0437−5439, they concluded that it would have burned out after just 20 million years. They argued that the star instead originated in the Large Magellanic Cloud, a satellite to our own galaxy. These new findings rule out that possibility, Gnedin said.

As for the discrepancy between the star’s age and location, Gnedin can explain: It’s a “blue straggler”—a star that looks much younger than it really is because it is actually two smaller stars with longer lifespans that have coalesced into one bigger star.

“This star was problematic from the beginning,” he said. “It was the most massive of all the hypervelocity stars we found and therefore it appeared to have the shortest lifetime, about five times shorter than the expected flight time from center of the galaxy to its current position if it was ejected. A solutions for that is that it is a blue straggler, a binary system of two stars that were ejected together and merged during flight.”

Just 16 hypervelocity stars have been discovered so far. There are 100 billion stars in the Milky Way.The paper is titled “A Galactic Center Origin for HE 0437−5439, the Hypervelocity Star Near the Large Magellanic Cloud.”

This research is funded by NASA and the Smithsonian Institution.