A new study of patients with bipolar disorder finds that 36 percent of those who were admitted to a Rhode Island psychiatric hospital  in 2010 were receiving “complex polypharmacy” — four or more psychotropic medications — from their community providers. The polypharmacy rate was significantly higher for women. Including prescriptions for other conditions the patients may have had, the average patient was on six medications.

PROVIDENCE, R.I. [Brown University] — A study of 230 patients with bipolar I disorder whose symptoms were severe enough to warrant admission to a Rhode Island psychiatric hospital in 2010 reveals that more than a third were admitted despite taking four or more psychiatric medications. Including medicines for other conditions, such as cardiometabolic diseases, the average patient came to the hospital taking six different drugs.

The study quantifies a difficult outcome for many patients with this difficult-to-treat disorder, said study lead author Lauren Weinstock, assistant professor (research) of psychiatry and human behavior at the Alpert Medical School of Brown University. Weinstock is on staff at Butler Hospital, where the patients were admitted. Those patients accrue a high burden of prescriptions each with their own side effects, often with unknown interactions and with a complexity that can result in not taking the medications as prescribed. This medication burden also includes high overall cost to patients and the healthcare system.

Yet for those patients who came to the hospital, these complex combinations of drugs have not proven sufficiently effective, Weinstock said. 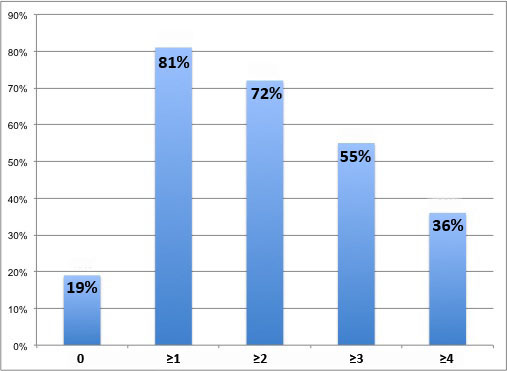 Complex polypharmacy. A study of patients admitted to a psychiatric hospital for bipolar disorder showed that 36 percent were taking four or more psychotropic drugs. The rate was higher for women. Image credit: Brown University

The study, published online Feb. 1, 2014, in the journal Psychiatry Research, also reports the likelihood of a high medication burden was significantly greater for women than men.

“The high rate of complex polypharmacy reflects the enormous challenge of symptom management that we currently face for bipolar disorder,” said Weinstock. “Without many treatment alternatives, this is where we are as a field. It is important for us to advance science and treatment of bipolar disorder so that this medication burden can be minimized for our patients.”

Weinstock, who studies psychotherapy as a complement to medical treatment at Butler, said she and her colleagues became motivated to quantify the pharmacological burden for those with biploar disorder after witnessing it anecdotally among patients.

Weinstock and her co-authors compiled data from patients’ hospital admission records in the calendar year 2010. The only inclusion criteria were that patients had to be 18 years or older have a diagnosis of bipolar I disorder at hospital admission and discharge.

“The data aren’t confounded by someone’s active participation in a research study,” Weinstock said. “We wanted to measure what was happening in routine community practice.”

The complex polypharmacy rate of 36 percent is higher than in a few previous studies that looked at bipolar patients, Weinstock said, because those studies did not always include all psychotropic medications, such as the commonly prescribed antianxiety medications.

Weinstock noted that because no clinical trial of bipolar medications has ever tested more than two drugs in combination, prescribing three or four exceeds practices supported by the field.

“By definition that’s not evidence-based treatment,” she said.

No prior studies had looked at the total medication burden, rather than just that of pyschotropics. It’s important to do so, Weinstock said, because cardiometabolic diseases, in particular, are often concurrent with bipolar disorder. Among the 230 patients in the study, for example, about half had such medical problems.

More so for women

Women, the data showed, were 58 percent of the total patients, but 68 percent of those with complex polypharmacy. Women were more likely to be on an antidepressant, antianxiety medication, and on stimulants, all of which which remain somewhat controversial in bipolar disorder treatment, Weinstock said.

The proportion of women taking an antidepressant (43 percent) was nearly twice that of men (23 percent). The significance of the gender disparities in the study endured even after statistically controlling for depressive symptoms in their diagnosis.

“Women weren’t prescribed more medications just because they were more likely to be depressed,” Weinstock said. “This finding raises the question of what other factors may influence higher rates of polypharmacy among female patients, such as patient or provider characteristics.”

The study does not provide information that could reveal why that is.

Still, combined with other studies and epidemiological data, the study points to a trend that needs improving, Weinstock and her co-authors wrote. “This increased reliance on polypharmacy does not appear to be contributing to decreased rates of illness chronicity or functional impairment in [bipolar disorder].”