*Bing launches a visual search gallery this week to help millions of World of Warcraft players find and learn about armor, weapons, and other in-game gear.*

REDMOND, Wash. — Bing launched a new World of Warcraft (WoW) visual search gallery on Wednesday, hoping to wow some of the game’s more than 12 million players.

Whether it’s the Chestplate of Septic Stitches, the Bloodvenom Blade, or the Ring of Rotting Sinew, the new Bing gallery lets players search, filter, and view images, videos, information, statistics, and links, as well as comments and blog posts, for the game’s most popular items.

It’s a collision of worlds for employee Lise Brende, director of marketing analytics for Bing and MSN, who plays WoW about 30 hours a week—just about any time she’s not working or sleeping.

“Sometimes it even wakes me up in the middle of the night, and I have to go play,” says Brende, who has been playing WoW for five years and working at Microsoft for nearly one.

“When you start to dream about it, you know it’s become part of your life. I’ve had dreams that people at work were chasing me with big axes. I have it so bad—it’s like my drug, honestly,” she says.

The game was created by Blizzard in 1994 as a real-time-strategy game called Warcraft. In 2004, the game transitioned to World of Warcraft, the current massively multiplayer online role-playing game (MMORPG), and currently has the most subscribers of any MMORPG. 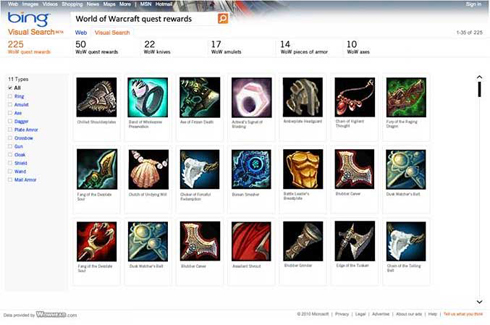 The Bing visual search gallery, built through a partnership with ZAM, is part of the search engine’s larger, ongoing effort to target passionate, enthusiastic Internet users, from Farmville players to casual gamers and from shoppers to travelers and music lovers. ZAM owns a network of WoW-related websites and databases for gamers, including the popular Wowhead.com database that powers the new visual search gallery.

As part of its campaign, Bing will reach out to gamers in other ways, including advertisements on popular player websites and through social channels.

“The amount of items in the game can be pretty overwhelming,” says Kevin Wallace, head of sales for ZAM. “The sites are really just a way of helping people out with the deluge of information that comes out of WoW,” he says. “We’re working with Bing as a sort of test to check things out. It’s been a lot of fun working with them, and I’m looking forward to seeing how it all pans out. A lot of work has gone into it.”

Brende and other WoW-playing employees at Microsoft provided feedback and ideas during the development of the visual search gallery.

Employees Armond Williams and Patrick Mendenall are part of an all-Microsoft WoW guild called Simulacra. The guild gets together (virtually) to play at least once a week for several hours, usually to take down some major villains. 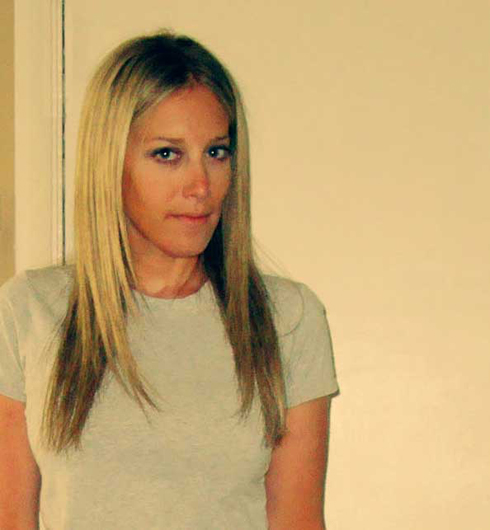 About the image: Lisa Brende, director of marketing analytics for Bing and MSN, plays World of Warcraft for about 30 hours a week, and even has a character named “Ibing” in honor of Microsoft’s search engine. Image credit: Microsoft

“Right now, we’re on the final boss in the Ice Crown Citadel,” Mendenall says. “We have been working on that for close to two months. It’s a slow progression but just so much fun to bang your head against difficult content.”

Although they gather virtually, linked by a group call and the headsets they wear to chat, their guild is like any other group of friends that gather to do something that enthralls them, whether it’s to watch “Lost,” play Frisbee, or go to the movies.

It’s even become water cooler conversation for them at work—both men work in Xbox as account managers for third-party games.

“A WoW conversation starts up…” Williams starts to say, “…and half of the lunch table gets up and leaves,” Mendenall finishes. Both laugh. They sometimes even draw out WoW strategies on the whiteboards in their offices.

The men, both of whom have been playing WoW since just after it was created, say it makes sense that Bing would reach out to WoW players.

“It’s a huge community of people, some of whom have spent time to build websites and create massive brain trusts about how to do this, where to find that. No other game has that kind of support,” Mendenall says.

Mendenall, Williams, and Brende say they plan to give the visual gallery a try and that they hope Bing will make future forays into the WoW realm.

In fact, Brende even named one of her characters after the search engine. Of her nine game characters at level 80 (the highest players can currently go in the game), the one she’s proudest of is a paladin called Ibing.

She says she hopes that the millions of people pausing, midgame, to use an Internet browser to look up all manner of WoW information and items will turn to Bing.

“It’s such a huge group of passionate people,” Brende says. “It would be awesome if Bing becomes the search engine for WoW players.”

1 comment on “Bing Launches Search for World of Warcraft Gamers”