River diversions are used to provide sediment and nutrients to surrounding estuaries to help rebuild wetlands, and are managed by the state of Louisiana in partnership with the US Army Corps of Engineers and other federal agencies. Large-scale diversions in the Mississippi River have been planned to enhance coastal wetland resilience, helping them to keep pace with sea-level rise.

“The large-scale diversions will likely cause shifts in salinity, which have huge implications for the plants and animals that need a specific salinity,” said Hongqing Wang, USGS Research Ecologist and lead author of the study. “Oysters, in particular, need suitable salinities in estuaries in order to grow big enough to harvest, and to produce the next generation.”

Louisiana is the number one supplier of shrimp, blue crab, crawfish, and oysters in the US, according to the Louisiana Department of Wildlife and Fisheries. The commercial oyster industry is important economically – providing thousands of jobs to commercial fishermen and billions of dollars in income to the state – and ecologically. 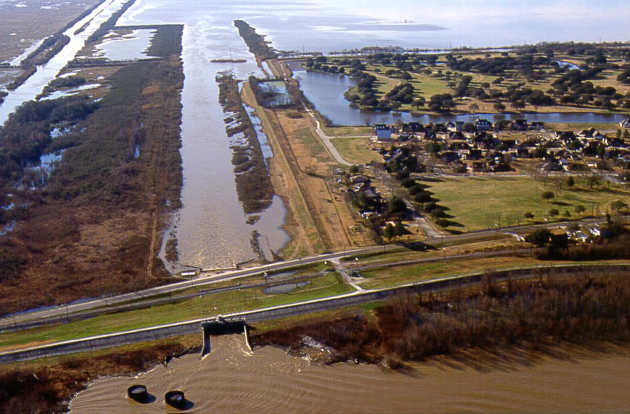 The Caernarvon Freshwater Diversion structure, located at the head of Breton Sound Estuary, became operational in 1992. Image credit: US Army Corps of Engineers

The study is one of few to consider the diversions in the context of sea-level rise, which is an issue of concern on Louisiana’s coastline. USGS estimates that about 90 percent of the total wetland loss taking place in the continental US is occurring in Louisiana, which has lost an estimated 25 percent of its land area since 1932.

Even without large-scale diversions, sea-level rise will influence water quality conditions across Breton Sound, Wang said. The impacts of diversions and sea-level rise in combination are more complicated.

“Sea-level rise actually works as an opposite force to the large-scale diversions, and when they interact, water quality conditions become more variable,” Wang said. “This is because there are complex forces – such as sediment transport, river flow, tides, and biological processes – interacting within the estuary.”

Large-scale diversions are a cornerstone of Louisiana’s coastal restoration master plan, which lists projects that build or maintain land in response to the state’s coastal land loss.

Wang points out large diversions may have positive benefits for rebuilding wetlands.

“However, when future large, controlled sediment diversions are being considered, in order to build new land or rebuild eroded land, it is important to consider their effects on the population and habitat of oysters and other important fishery species,” said Wang.

The study, “A modeling study of the impacts of Mississippi River diversion and sea-level rise on water quality of a deltaic estuary” has been published in Estuaries and Coasts journal and is available online.

The project was supported by the USGS Ecosystem Mission Program and the US National Oceanic and Atmospheric Administration through Louisiana Sea Grant.