*Two studies by a UA business professor examine the hiring of CEOs, finding that new CEOs make better decisions when their self image is tied to the firm and that “strategic noise” can soften market response to a new hire.*

The first of the papers, out now in the Academy of Management Journal, finds a new remedy to the CEO agency problem. Instead of trying to design incentives and controls to keep corporate leaders acting in the best interest of the company, Boivie and his co-authors demonstrate that boards should try to hire leaders who strongly identify with the company itself.

“We were interested in how an internal psychological factor – how much a CEO’s self-concept is tied to a firm – might influence the extent to which that firm incurs agency cost,” Boivie said. 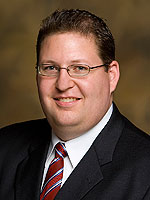 “CEOs who have a self-image that overlaps with the firm will make better decisions for that firm,” Boivie said. “For example, when the firm’s performance is poor, they will take less compensation. They will refrain from using the corporate jet for personal use.”

The researchers estimate that 40 percent of CEOs see their identities tied closely to their firm and its image, and that common shareholder sticking points such as overcompensation and excessive perks are not issues in these firms. Further, these CEOs are self-regulating and reduce the need for board supervision.

“CEOs who identify with the firm intentionally work for its best interests because helping the firm is tantamount to helping him or herself,” Boivie said.

In a second paper, Boivie and his co-authors identify a phenomenon they call strategic noise.

“It’s a preemptive form of impression management,” he explained. “When a firm announces a new CEO, they might also make several other important announcements in the days before and after.”

If the market responds negatively to the CEO announcement, the firm has other news items to point to as a possible cause. “It gives them the option of spinning a negative response,” Boivie said.

He and his co-authors stumbled onto the concept when they were looking at data about CEO succession and looking for unexplained bumps in the stock price. They found that they had to throw out 20 percent of their results because of other news the firms had released at about the same time.

“That was more than I’d predict would happen by chance,” Boivie said. “We thought, maybe it’s not random; maybe they’re releasing this information on purpose. What would be the reason for this strategic noise?”

The market reaction to a CEO announcement sends a signal to shareholders, and Boivie and his co-authors identified firms that were replacing founders or long-terms CEOs as having a higher incentive to create strategic noise.

“We’re not arguing that firms are trying to trick the market,” he explained. “Most of the time, boards think they’ve made the right choice in a new CEO. Creating strategic noise gives the person breathing room to be evaluated based on his or her own merits.”