Best dads on the planet? Let’s start with these little guys

The world’s finest fathers just might be covered with fur and live in the trees of Argentina.

They’re owl monkeys, and a growing body of research indicates that males of the species do much of the nurturing, childrearing, and protecting of offspring. They should be at the top of any Fathers Day list for the animal kingdom, a Yale University biological anthropologist says.

“These fathers play, groom, share food, and transport infants more than the mothers,” said Eduardo Fernandez-Duque, a Yale professor who has studied owl monkeys in their natural habitat for nearly two decades. “We have found that owl monkeys are the first of any primate species, and only the fourth pair-living mammal, to show genetic monogamy, or real faithfulness, between partners.” 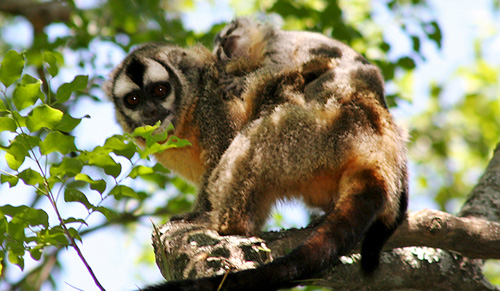 A father owl monkey carries a youngster in his back. Image credit: Yale University

Fernandez-Duque and his wife, Yale biological anthropologist Claudia Valeggia, set up a field site in northeastern Argentina on 170 acres of forest within a 62,000-acre cattle ranch in the Chaco region. Since 1996, the Owl Monkey Project has produced a wealth of research on the social habits of the small, arboreal primates.

Argentinian owl monkeys weigh about three pounds. They have large, brown eyes, make a wide range of vocal sounds, and are active both at night and during the day. They are also called night monkeys. 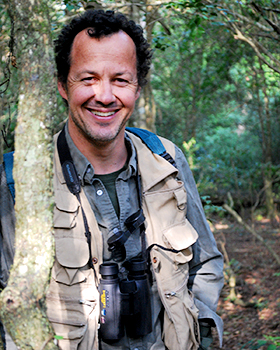 In recent years, the Owl Monkey Project has been the source of groundbreaking research on the monogamous nature of owl monkeys. Detailed tracking and genetic data suggests that the monkeys are both genetically and socially monogamous. Although female owl monkeys sometimes take on a new male partner, females that are able to preserve a monogamous relationship produce 25% more offspring.

Fernandez-Duque said owl monkey fathers shoulder at least as much, or more, of the parenting duties as owl monkey mothers do. Mothers’ primary interaction with infants involves nursing; fathers do much of the carrying and playing with infants. Owl monkey dads also are the ones likely to retrieve and hold offspring when there is perceived danger.

Fernandez-Duque believes one key to owl monkey monogamy may have to do with food. Primary food sources are spread out geographically in small clusters, with enough to sustain only one female. Males tend to stay close to only one female, and guard the shared territory with the females fiercely.

As social monogamy evolved among owl monkeys, Fernandez-Duque said, the close bond between males and females aided in the development of genetic monogamy. The males’ involvement in childrearing helped females recover from pregnancy more quickly and gave offspring a better chance for survival.

“Ready access to genetic testing these days is helping us solve a traditional puzzle in evolutionary biology: Why are some male mammals monogamous, and why do some of those males invest so much on infants they do not know if they have sired?” Fernandez-Duque said. “We think this is a possible explanation for one of the most remarkable dads in the animal kingdom.”

For more information about the Owl Monkey Project, visit its website: https://owlmonkeyproject.wordpress.com/