Researchers with the U.S. Department of Energy (DOE)’s Lawrence Berkeley National Laboratory (Berkeley Lab) have shed light on the role of temperature in controlling a fabrication technique for drawing chemical patterns as small as 20 nanometers. This technique could provide an inexpensive, fast route to growing and patterning a wide variety of materials on surfaces to build electrical circuits and chemical sensors, or study how pharmaceuticals bind to proteins and viruses.

One way of directly writing nanoscale structures onto a substrate is to use an atomic force microscope (AFM) tip as a pen to deposit ink molecules through molecular diffusion onto the surface. Unlike conventional nanofabrication techniques that are expensive, require specialized environments and usually work with only a few materials, this technique, called dip-pen nanolithography, can be used in almost any environment to write many different chemical compounds. A cousin of this technique — called thermal dip-pen nanolithography — extends this technique to solid materials by turning an AFM tip into a tiny soldering iron.

Dip-pen nanolithography can be used to pattern features as small as 20 nanometers, more than forty thousand times smaller than the width of a human hair. What’s more, the writing tip also performs as a surface profiler, allowing a freshly-writ surface to be imaged with nanoscale precision immediately after patterning. 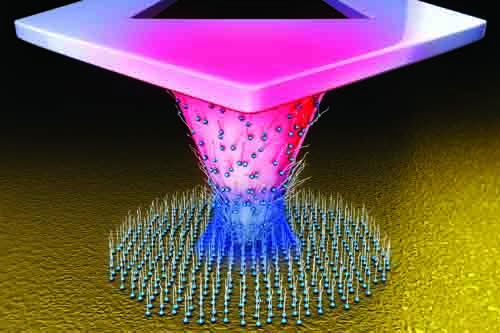 Thermal dip-pen nanolithography turns the tip of a scanning probe microscope into a tiny soldering iron that can be used to draw chemical patterns as small as 20 nanometers on surfaces. (Image courtesy of DeYoreo, et. al)

“Tip-based manufacturing holds real promise for precise fabrication of nanoscale devices,” says Jim DeYoreo, interim director of Berkeley Lab’s Molecular Foundry, a DOE nanoscience research center. “However, a robust technology requires a scientific foundation built on an understanding of material transfer during this process. Our study is the first to provide this fundamental understanding of thermal dip-pen nanolithography.”

In this study, DeYoreo and coworkers systematically investigated the effect of temperature on feature size. Using their results, the team developed a new model to deconstruct how ink molecules travel from the writing tip to the substrate, assemble into an ordered layer and grow into a nanoscale feature.

“By carefully considering the role of temperature in thermal dip-pen nanolithography, we may be able to design and fabricate nanoscale patterns of materials ranging from small molecules to polymers with better control over feature sizes and shapes on a variety of substrates,” says Sungwook Chung, a staff scientist in Berkeley Lab’s Physical Biosciences Division, and Foundry user working with DeYoreo. “This technique helps overcome fundamental length scale limitations without the need for complex growth methods.” 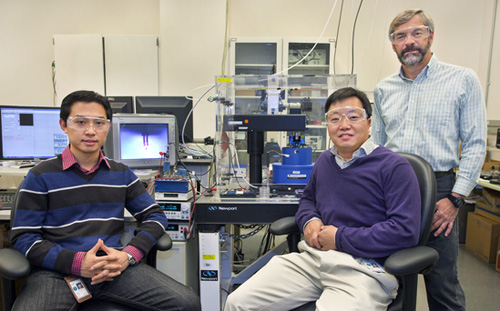 (From left) Debin Wang, Sungwook Chung and James DeYoreo at Berkeley Lab’s Molecular Foundry have shed light on a tip-based fabrication technique for patterning a wide variety of materials on surfaces to build electrical circuits and chemical sensors, or study how pharmaceuticals bind to proteins and viruses. (Photo by Roy Kaltschmidt, Berkeley Lab)

DeYoreo and Chung collaborated with a research team from the University of Illinois at Urbana-Champaign that specializes in fabricating specialized tips for AFMs. Here, these collaborators developed a silicon-based AFM tip with a gradient of charge-carrying atoms sprinkled into the silicon such that a higher number reside at the base while fewer sit at the tip. This makes the tip heat up when electricity flows through it, much like the burner on an electric stove.

This ‘nanoheater’ can then be used to heat up inks applied to the tip, causing them to flow to the surface for fabricating microscale and nanoscale features. The group demonstrated this by drawing dots and lines of the organic molecule mercaptohexadecanoic acid on gold surfaces. The hotter the tip, the larger the feature size the team could draw.

“We are excited about this collaboration with Berkeley Lab, which combines their remarkable nanoscience capabilities with our technology to control temperature and heat flow on the nanometer scale,” says co-author William P. King, a University of Illinois professor of mechanical sciences and engineering. “Our ability to control the temperature within a nanometer-scale spot enabled this study of molecular-scale transport. By tuning the hotspot temperature, we can probe how molecules flow to a surface.”

“This thermal control over tip-to-surface transfer developed by Professor King’s group adds versatility by enabling on-the-fly variations in feature size and patterning of both liquid and solid materials,” DeYoreo adds.

Chung is the lead author and DeYoreo the corresponding author of a paper reporting this research in the journal Applied Physics Letters. The paper is titled “Temperature-dependence of ink transport during thermal dip-pen nanolithography.” Co-authoring the paper with Chung, DeYoreo and King were Jonathan Felts and Debin Wang.

This work at the Molecular Foundry was supported by DOE’s Office of Science and the Defense Advanced Research Projects Agency.