A study led by researchers from Lawrence Berkeley National Laboratory has found for the first time that thirdhand smoke—the noxious residue that clings to virtually all surfaces long after the secondhand smoke from a cigarette has cleared out—causes significant genetic damage in human cells.

“This is the very first study to find that thirdhand smoke is mutagenic,” said Lara Gundel, a Berkeley Lab scientist and co-author of the study. “Tobacco-specific nitrosamines, some of the chemical compounds in thirdhand smoke, are among the most potent carcinogens there are. They stay on surfaces, and when those surfaces are clothing or carpets, the danger to children is especially serious.”

Their paper, “Thirdhand smoke causes DNA damage in human cells,” was published in the journal Mutagenesis. The lead investigator was Bo Hang, a biochemist in the Life Sciences Division of Berkeley Lab; he worked with an interdisciplinary group, including chemists from Berkeley Lab’s Environmental Energy Technologies Division—Gundel, Hugo Destaillats and Mohamad Sleiman—as well as scientists from UC San Francisco, UCLA Medical Center and the University of Texas. 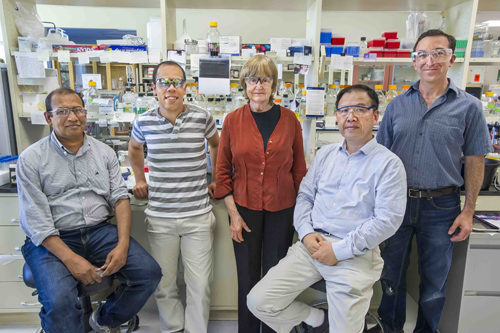 The researchers used two common in vitro assays, the Comet assay and the long amplicon-qPCR assay, to test for genotoxicity and found that thirdhand smoke can cause both DNA strand breaks and oxidative DNA damage, which can lead to gene mutation. Genotoxicity is associated with the development of diseases and is a critical mechanism responsible for many types of cancer caused by smoking and secondhand smoke exposure.

“Until this study, the toxicity of thirdhand smoke has not been well understood,” Hang said. “Thirdhand smoke has a smaller quantity of chemicals than secondhand smoke, so it’s good to have experimental evidence to confirm its genotoxicity.”

It is the first major study of disease-related mechanisms to come out of the California Consortium on the Health Effects of Thirdhand Smoke, which was established two years ago largely as a result of work published in 2010 by Gundel, Destaillats, Sleiman and others. The Consortium is funded by the Tobacco-Related Disease Research Program, which is managed by the University of California and funded by state cigarette taxes.

The 2010 studies from Berkeley Lab found that residual nicotine can react with ozone and nitrous acid—both common indoor air pollutants—to form hazardous agents. When nicotine in thirdhand smoke reacts with nitrous acid it undergoes a chemical transformation and forms carcinogenic tobacco-specific nitrosamines, such as NNA, NNK and NNN. Nicotine can react with ozone to form ultrafine particles, which can carry harmful chemicals and pass through human tissue. Humans can be exposed to thirdhand smoke through inhalation, ingestion or skin contact.

Thirdhand smoke is particularly insidious because it is extremely difficult to eradicate. Studies have found that it can still be detected in dust and surfaces of apartments more than two months after smokers moved out. Common cleaning methods such as vacuuming, wiping and ventilation have not proven effective in lowering nicotine contamination. “You can do some things to reduce the odors, but it’s very difficult to really clean it completely,” said Destaillats. “The best solution is to substitute materials, such as change the carpet, repaint.”

Now the new study suggests thirdhand smoke could become more harmful over time. To generate the samples, the researchers put paper strips in smoking chambers. The acute samples, generated at Berkeley Lab, were exposed to five cigarettes smoked in about 20 minutes, and the chronic samples, generated at UCSF, were exposed to cigarette smoke for 258 hours over 196 days. During that time, the chamber was also ventilated for about 35 hours.

The researchers found that the concentrations of more than half of the compounds studied were higher in the chronic samples than in the acute. They also found higher levels of DNA damage caused by the chronic samples. “The cumulative effect of thirdhand smoke is quite significant,” Gundel said. “The findings suggest the materials could be getting more toxic with time.”

Next Hang is pursuing further understanding of the chemistry of the NNA reaction with DNA bases. NNA is a tobacco-specific nitrosamine that is not found in freshly emitted secondhand smoke. “It looks like it’s a very important component of thirdhand smoke, and it is much less studied than NNK and NNN in terms of its mutagenic potential,” he said.

The researchers conclude in their paper: “Ultimately, knowledge of the mechanisms by which thirdhand smoke exposure increases the chance of disease development in exposed individuals should lead to new strategies for prevention.”