New research findings could turn perceptions of the already despised bed bug from nuisance pest into medically important threat. A study from North Carolina State University shows that histamine levels are substantially higher in homes infested by bed bugs than in pest-free homes, and that these histamine levels persist for months – even if the bed bugs have been eliminated from the home.

NC State post-doctoral researcher Zachary DeVries and colleagues from NC State and the N.C. Dept. of Health and Human Services conducted a Raleigh-based study to compare histamine levels in homes with and without bed bug infestation. The researchers also evaluated the extent to which treatment and time affect those histamine levels. 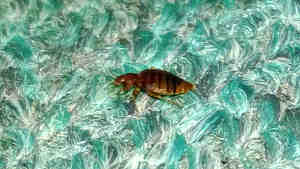 In humans, histamines are generally released as part of an immune response. They cause inflammation and help allow other immune system chemicals to fight a pathogen or to do cellular repair work. Histamines, though, can have deleterious effects in humans, including rashes when contacted with skin and respiratory problems when inhaled – think of the allergic reactions to certain foods, pollen, mold or other environmental conditions.

“Histamines are used in skin and respiratory allergy tests as a positive control – they cause a bump in skin tests and restrict breathing in respiratory tests,” DeVries said.

Bed bugs naturally give off high levels of histamine in their feces; DeVries says that bed bugs use histamine as a marker of a good place to aggregate. When bed bugs find their way into homes, they tend to aggregate in bedrooms where sleeping humans – the food source for bed bugs – spend a good part of their day.

The researchers also tracked histamine levels over time after having professional heat treatments occur in a subset of the infested apartments. Histamine levels did not decline significantly three months after treatment, showing the chemical’s capacity to persist despite extreme heat.

“A combination of heat treatment to eradicate bed bugs and rigorous cleaning to eliminate some of the household dust could be a way to reduce these histamine levels; we’ll do future testing to bear that out,” DeVries said. “We’ll also further investigate the effects of histamine in an indoor environment, including chronic exposure to histamine at low levels.”

Funding for the work came from the U.S. Department of Housing and Urban Development, the Alfred P. Sloan Foundation, the National Institute of Environmental Health Sciences, and NC State’s Blanton J. Whitmire endowment.