When the young men of the U.S. Army’s 16th Infantry 2nd Battalion headed into Iraq in 2007 they believed that they were going to make a difference in what many Americans then believed was a lost cause.

What happened to these 800-plus soldiers when they stepped into harm’s way, and what it was like when they returned home, was the topic of a University of Delaware First Year Common Reader Program talk given by author David Finkel on Tuesday, Sept. 23, in Mitchell Hall.

Finkel is the Pulitzer-Prize winning author of The Good Soldiers and the 2014 First Year Common Reader selection Thank You For Your Service.

A recipient of the Carla Cohen Literary Prize for nonfiction, Thank You For Your Service, published by Sarah Crichton/Farrar and Giroux, also was a finalist for the 2013 National Book Critics Award in that category. 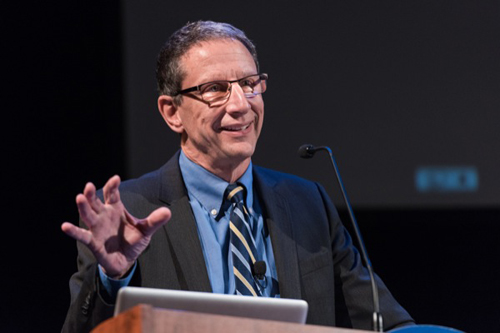 David Finkel discusses his book “Thank You For Your Service” on Tuesday, Sept. 23, before a packed house in Mitchell Hall. Photo by Evan Krape

University President Patrick Harker welcomed the audience of more than 650 students, plus an additional group watching remotely via simulcast in Wolf Hall.

“While I hope you’ve made a few new friends through your conversations about this book, the First Year Common Reader is not just an ice-breaker so you can get to know each other,” Harker said. “This is really your first collegiate experience because it opens your eyes to people and a world you might never have known.”

While the author’s latest book brings to life the challenges faced by American soldiers and their families in the aftermath of war, Finkel said that their story began on Jan. 10, 2007, when then President George W. Bush went on television and announced a new strategy called “the surge.”

“Before the after-war, there was the war itself,” Finkel said. “The people in Thank Your for Your Service were trying to recover and heal from what they had been through.”

Finkel reminded the freshman audience that that the soldiers in 2-16 were approximately the same age as students starting their college experience when they went to the Middle East in 2007.

“Although they may not have been entering UD, they did have one thing in common with you and pretty much any 19-year-old,” Finkel said. “They thought they were invincible.”

While the surge speech was carried by news outlets across the country and around the world, a select group of soldiers stationed in Fort Riley, Kansas, paid special attention to what Bush was saying to the American people.

“Listening to the speech was a guy named Lt. Col. Ralph Kauzlarich, who was in command of an infantry battalion comprised of about 800 young men, ages 18, 19 and maybe 20 years old,” Finkel said. “Most of them were about to leave the country for the first time and most of them were going on their first deployment.”

Originally slated for convoy protection duty in western Iraq, the members of 2-16 were going to be refashioned into a combat battalion that would be going straight into the heart of the conflict.

The soldiers at Fort Riley in early 2007 had not yet written home that they had lost all hope, or been haunted by dreams about the people they had killed and the things that they had seen, Finkel said.

“This is the moment he (Kauzlarich) would say to his guys, ‘We’re not doing convoy protection, we’re going to be combat warriors and you’re going to a mean little section of Baghdad,” Finkel said. “When his men heard this, they let out a pretty loud cheer. They wanted to go — they were excited.”

A few months later, after several horrific experiences with roadside bombs, the attitudes of the men started to change as the numbers of the wounded and killed began to rise, Finkel said.

“They felt at first like they were going to be the difference, and they were for just a little while,” Finkel said. “Then, they lost their first man, and then they lost another, and then a lot more happened.”

Nearly 7,000 American troops died during the wars in Iraq and Afghanistan as of April 2014, including 14 members of the 2nd Battalion serving in Iraq.

“The hope I have is that you pay attention to the people in this book,” Finkel said. “Its purpose is not to judge, but for its readers to become people who understand.”

During a question and answer period following his talk, Finkel also fielded student questions submitted by a panel moderated by Ralph Begleiter, director of UD’s Center for Political Communication. Panelists also included David Dinerman, a junior majoring in criminal justice and international business, with minors in Spanish and psychology, and Gabrielle Green, a senior double-majoring in criminal justice and interpersonal communication with a minor in sociology.

Seven students were awarded prizes in the Thank You for Your Service essay contest sponsored by the First Year Experience program.

The winners, all freshmen, are

Honorable mention awards were presented to:

About the First Year Common Reader

The shared common reader is a unique opportunity for students to engage in a meaningful conversation with fellow students and to begin to share in the intellectual life of the entire UD community.

The book is read before arriving on campus with speakers, films and other cultural events, organized around the theme of the book throughout the first semester.

Previous common readers have included My Beloved World,by U.S. Supreme Court Justice Sonia Sotomayor; Behind the Beautiful Forevers: Life, Death and Hope in a Mumbai Undercity, by Katherine Boo; and The Immortal Life of Henrietta Lacks, by Rebecca Skloot.