Battle between the Placenta and Uterus could Help Explain Preeclampsia

A battle that brews in the mother’s womb between the father’s biological goal to produce the biggest, healthiest baby possible vs. the mother’s need to live through delivery might help explain preeclampsia, an often deadly disease of pregnancy. The fetus must be big enough to thrive, yet small enough to pass through the birth canal. In a new study, Yale researchers describe the mechanism that keeps these conflicting goals in balance.

The findings are published in the October 11, 2011 online issue of Reproductive Sciences.

The battle is waged between the mother’s uterus and the baby’s placenta, which is made up of cells called trophoblasts that are controlled by the father. In the study, led by Dr. Harvey J. Kliman, research scientist in the Department of Obstetrics, Gynecology & Reproductive Sciences at Yale School of Medicine, researchers observed how the placenta tricks the mother so she doesn’t attack the trophoblasts that are trying to increase the flow of her blood into the placenta. If this placental deception doesn’t work the mother may develop preeclampsia, a condition that results in high blood pressure and protein in the mother’s urine. The only known cure for preeclampsia is delivery of the baby. 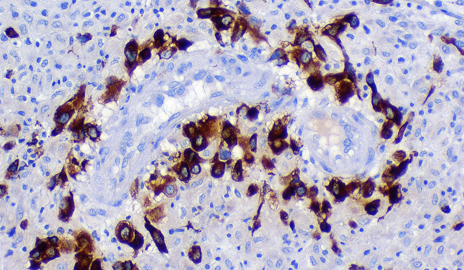 The placenta’s job is to get nutrients from the mother during pregnancy. Kliman explained that in a normal pregnancy, specialized invasive trophoblasts leave the placenta and invade the mother’s tissues to attack and destroy the walls of her blood vessels. This allows the most blood possible to enter the placenta, resulting in a big baby.

But the mother’s own “soldiers,” called lymphocytes, are constantly looking to destroy the invasive trophoblast cells. The placenta in turn appears to trick the mother by creating a diversion to occupy her lymphocytes.

The placenta creates this diversion by secreting a protein called placental protein 13 (PP13), also known as galectin 13, into the mother’s blood where it travels through her veins into the uterus below the placenta. There the PP13 leaves the veins where it triggers the mother’s immune system to react and attack. The entire area around these veins becomes a mass of inflammation and dead cells, called necrosis.

“We realized that these zones of necrosis are likely occupying the mother’s soldiers while the invasive trophoblasts sneak into her arteries, leading to more blood flow to the placenta and a bigger baby,” said Kliman. “We believe that maintaining this balance could be the key to a healthy pregnancy free from preeclampsia.”

The study was funded by a research grant from the European Union (FP6-grant # 037244, project title Pregenesys), the Finland Israel R&D Fund grant #41256 (Eureka – 3808 RPT), and the Yale University Reproductive and Placental Research Unit.