BAK USA: First US manufacturer of tablets nourishes communities, one device at a time

It has been said that knowledge feeds the soul – which is why it’s no surprise that on a random Tuesday in March, BAK USA Co-Founder and Director of Products Christian Bak can be found nourishing himself alongside several dozen other employees striving to redefine the word “company.”

“It’s our monthly potluck,” explains Bak, the affable, philanthropic face of a new take on electronics manufacturing. “Everybody from management to the operators to storeroom, logistics – we all get together in the break room, and everyone brings a dish from their home country.”

Featuring authentic, homemade foods from India, Puerto Rico, Kenya, the Middle East and more, 14 different countries are represented in the BAK feast. “The smells are amazing,” marvels Bak. “It’s a testament not only to our commitment, but to our benefit of having a diverse workforce. We don’t think in traditional, linear ways about technology and innovation; if you want to take a picture of how multicultural we are, the potluck is probably it.” 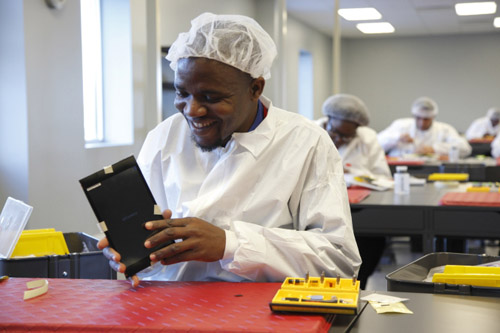 Once the last plate has been passed and the final belt-notch unloosened, it’s time for everyone to return to work – and prepare the most amazing dish of the day.

“We’re not just making tablets,” explains Lucky Anita Lakareber, a native of Uganda who now serves as an administrative assistant. “We’re giving back to the community.”

Whether you’re talking about Lakareber, Salah Macheremo (a former teacher from Kenya) or many of their co-workers, each takes equal pride in manufacturing such devices as the BAK Board, the first tablet built in the United States. What may be surprising to some is that BAK USA assembles each tablet by hand in their Buffalo, New York, headquarters. 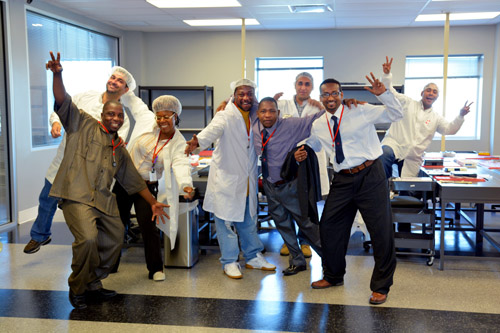 A team of BAK USA operators in the clean room at BAK USA. Photo credit: Microsoft

“There was a time when the chairman [JP Bak, Christian’s father] said: ‘If you’re making a tablet, put in mind that there is someone out there that is getting it for the first time,’” Lakareber remembers. “Make sure you think of that other person on the receiving end.”

Such empathy is a trademark of the Bak family, which began this journey by thinking of others after the 2010 Haiti earthquake that killed more than 300,000 and left hundreds of thousands more homeless. Danish electronics entrepreneur JP Bak and his wife Ulla traveled to Port au Prince and began building houses – then realized they could play to their strengths by putting people back to work via a tablet-assembling facility. After being joined by their children Christian and Eva, a question arose: If this business model can create jobs in Haiti, could it also work for the sputtering economy of the Bak family’s adopted home, America?

“The thought of coming to the biggest stage in the world to set up a company in the nexus of business development was a thrill my father couldn’t pass up,” explains Christian Bak, whose grandfather was a UC Berkeley professor and exposed his mother to California during her formative years. “We’ve always been tremendously fond of America. I grew up in a household where the opportunity in America was presented in terms of harnessing the real power of the people, and the barriers you could cross by setting up a business here in the U.S.” 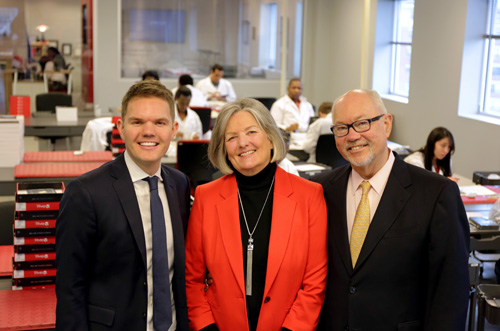 With U.S. unemployment numbers in early 2010 hitting their highest levels in a quarter-century, the Bak family wanted to help. “In terms of my childhood, I was always taught that you should work towards something greater than yourself,” Bak says.

Now, a few years later, the dream has become a reality. “We come to work here, and I’m surrounded by 29 people who wouldn’t be here on the fifth floor at their job in Buffalo if it wasn’t for a conversation we had around our breakfast table three years ago,” Bak recalls. “It’s immensely rewarding.”

The rewards are increasing as BAK USA, which previously targeted the Android platform, is celebrating a move into the Windows ecosystem that has given the company a newfound momentum.

“Windows 10 was the missing piece,” Bak explains. “I’m a product developer, and I’ve been following the evolution of technology for many years. To move away from a desk-centric work environment into a mobile, take-your-device-wherever-you-want-to-go model where you can take your documents with you … that’s not only the future, it’s here right now.”

As an official Microsoft original equipment manufacturer (OEM), BAK USA will be creating devices that run Windows 10, giving their BAK Board tablets access to Microsoft’s suite of productivity tools in addition to a secure operating system with expanded opportunities for mobility and productivity.

On March 16, BAK USA and Microsoft will be hosting a special event at the Microsoft Store in Buffalo’s Walden Galleria Mall. Buffalo mayor Byron Brown, JP Bak and Buffalo Bills legend Thurman Thomas are among those who will be celebrating the new partnership – and looking forward to a future together.

“At Microsoft, we’re committed to helping individuals and organizations achieve more,” says Jordan Chrysafidis, Microsoft vice president of US OEM. “Windows 10 is the reliable, secure and flexible computing platform that helps BAK meet the needs of their customers.”As part of BAK USA’s mission to assist and nurture communities worldwide by providing them with the tools to access knowledge, these customers are often schools, hospitals, or children who may find the device to be their only entry into the technological realm. At times the company works with local foundations and funding bodies to assist schools and other organizations in their purchasing of devices, and BAK USA has provided discounts and donations to fulfill the needs of a various deployments.

“We build rugged devices that not only meet the needs of Buffalo, but also in schools,” Bak says. “We’re focusing on B2B [business-to-business], so direct relationships with schools and large-, medium- and small-size enterprises. That’s where we can make a huge difference in not only how the devices are serviced, but also how they are deployed. We’re able to do some really cool things with Windows 10, as far as imaging them onsite and reducing the human resource commitment that schools and private institutions have to dedicate to getting the devices up to speed.”

With such factors under control, BAK USA is freed up to concentrate on more important things – like rewriting the playbook on using technology to expand opportunities to people in their community.

“Lawrence Smith is a wonderful example of our typical employee,” Bak says of the company’s storeroom manager. “We hire people who are refugees and may not speak the language perfectly, and we work with a lot of local refugee- and community-oriented groups to get our operators. We had a meeting in what’s called a ‘Promise Neighborhood’ in Buffalo, state-funded neighborhoods trying to spur economic activity … I walked in, saw an extremely tall man dressed in a very nice suit – clearly his best attire – he walked over and said ‘Christian, if you hire me, I’m your man for life.’”

Fast-forward a year, and Smith is a valued part of the BAK USA team. “And I believe him, that he will be here for life,” Bak says of the man, who had been unemployed for a number of years before their meeting. “Now, there are so many things he’s done for his community because of this job. He talks about the impact it’s had on his family, cousins, nieces and nephews. Now he has a stable job he can be proud of.”

“We try to put the person front-and-center,” Bak explains of an ethos that carries into their products.

“We don’t have an assembly line,” he says of the company’s Buffalo facility. “Each person builds a device themselves, runs diagnostics, then passes the tablet along to quality control. There’s a real sense of accomplishment with each product’s completion, and the sense that it was built for you by a person whose life was changed by being a part of this company. And that’s invigorating.”

At the end of every assembly, the BAK employee inscribes his or her name on the device, alongside a message saying that it was made in Buffalo.

“We wanted to not only empower our operators so they feel good about building a device and being part of the tech revolution, but also to instill a sense of pride and a sense of responsibility,” explains Bak, who points out that his office is only about six feet away from a work desk where 20 devices are constructed every day. “[Our employees know] that these devices they’re building very well may be the only technological gateway our end users get in their entire childhood, or even adulthood. If we do a poor job, if we don’t build it with due care and make sure the product is as good as it can be, we are not being the change that we want to see in the world. We’re letting people down.”

If knowledge does indeed feed the soul, that means the diverse group of BAK USA employees go home every night having nourished their community – much like their potluck, but on a far grander scale.

“I feel like I live in a family of 200,000 people in Buffalo,” Bak says of the city. “We get people all the time, coming by our office to talk technology and innovation … the city of Buffalo has embraced us just as much as we’ve embraced the city, and that’s been a truly extraordinary and humbling experience.”

As their products go out into the world and help change lives, their reach stretches far beyond Buffalo.

“It’s an immensely powerful message,” says Bak. “We very much feel the power of being responsible for bringing technology to places where they would otherwise never go.”

Where do things go from here? According to Bak, wherever they are needed. “Our main aim right now is to get Buffalo to a point where it is able to sustain itself as an independent factory and sales organization, then start to replicate the Buffalo model all throughout the United States,” he says. “If I have my way, we are going to have a net of factories, workshops, field operations and development centers all throughout the U.S.; we’ll look for cities where we can have a huge impact. These are socially depressed areas where putting in 100 or 150 new jobs can really change the fabric of these communities.”

But no matter how big the company may get, Bak promises there will always be potluck Tuesdays where employees and executives all sit down together to break bread. “My mom is the president, my dad is the chairman and CEO, my sister is our head of Human Resources,” he beams. “It’s a real family affair, and we try to emphasize that.”

“Sometimes we’ll laugh and say if all else fails, we’ll open up an international buffet,” Bak says of the potluck. “But community is central to our operation. It’s only a problem for our waistlines.”