AUSTIN, Texas — Scientists studying how microbes evolve have long assumed that nearly all new genetic mutations get passed down at a predictable pace and usually without either helping or hurting the microbe in adapting to its environment. In a new study published in the journal Nature, an international team of researchers studying tens of thousands of generations of E. coli bacteria report that most new genetic mutations that were passed down were actually beneficial and occurred at much more variable rates than previously thought. The finding could have implications for treating bacterial infections.

“If this holds true for our own microbiomes, it suggests that microbes are always becoming more specialized for competing in their local environment in subtle ways,” says Jeffrey Barrick, an assistant professor of molecular biosciences at The University of Texas at Austin and co-author of the new study. “This could have implications for personalized medicine, as it suggests that E. coli in my gut will evolve idiosyncratic differences from those in your gut over time, for example.” 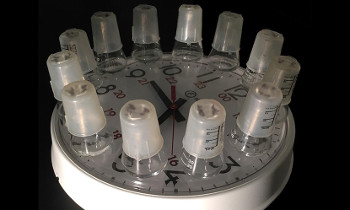 By freezing samples of bacteria grown over tens of thousands of generations, scientists could go back in time to reconstruct how different strains evolved. Image credit: Jeffrey Barrick

The work was made possible by a unique repository of bacterial samples collected and maintained by Richard Lenski, a professor of microbiology and molecular genetics at Michigan State University, called the Long-term Evolution Experiment, or LTEE.

The researchers sequenced the entire genomes of hundreds of versions of E. coli bacteria sampled over tens of thousands of generations to pinpoint the genes with beneficial mutations that gave the bacteria a competitive edge over their ancestors.

The bacteria from different generations of the LTEE have been stored in freezers for nearly 30 years, but they were brought back to life to look for the changes in their DNA. Being able to go back into the freezer to study samples from years ago is one of the reasons Lenski calls the LTEE “the experiment that keeps on giving.”

“One of the nice things about such a long-term experiment is that new technologies come along that didn’t exist when I started the LTEE in 1988,” says Lenski, who is part of Michigan State University’s BEACON Center for the Study of Evolution in Action. “The first bacterial genome was not sequenced until 1995, and now, in this single paper, we’ve sequenced 264 complete genomes from this one experiment.”

The team sequenced hundreds of E. coli genomes to examine how the bacteria had changed in their DNA over 50,000 generations. The researchers found more than 14,000 changes across the LTEE’s 12 populations. Each population changed in different ways, but there were some important commonalities as well. Most significantly, the mutations were concentrated in a subset of the genes – those where mutations gave the bacteria a competitive edge.

“We are used to thinking about evolutionary time being measured in quiet ticks, each one representing neutral mutations accumulating in genomes, with an occasional chime or gong, representing a beneficial mutation,” says Barrick. “But, under normal circumstances, the evolutionary clock for bacteria may be more cacophonous than quiet.”

One of the striking differences that arose between populations is that half of them evolved to mutate at much higher rates than the other populations, even though they all started from the same ancestral strain that had a low mutation rate. In some of these “hypermutating” strains, the rate at which mutations accumulate ramped up early on in the experiment and then slowed down thousands of generations later. Barrick says that makes sense because over time, there are fewer ways to improve, and as more mutations accumulate, there’s a growing risk of adding harmful mutations.

“Overall, it’s interesting that mutation rates are so evolvable, and that they naturally adjust to be high and then low depending on how well adapted a population is to its environment, even in this very stripped down microcosm version of the real world,” says Barrick.

This suggests that a key assumption behind techniques for dating how long ago two related organisms began to diverge – namely, that mutations accumulate at a stable rate over time — might not accurately represent the true dynamics for many microbes.

This paper is the product of several collaborations. Barrick and members of his research group created software for analyzing the genomes. Their work was important for accurately reconstructing the evolutionary histories of the populations and for counting the relative contributions of different types of mutations to genomic evolution.

Read the article from the Aug. 1, 2016 advance online publication of Nature: Tempo and mode of genome evolution in a 50,000-generation experiment