At UChicago, Many Have Dreams and Many Voiced Them in Honor of MLK’s Legacy

New York teacher Geoffrey Canada’s dream is for a stronger Harlem, with better educational opportunities for its children. Marianna Manzanares hopes that more of her fellow college students pay attention to issues affecting their communities and the world at large. Marcus Board dreams of a world where fear and doubt don’t hold people back from achieving their potential.

Hundreds of people from the UChicago community have voiced such dreams over the past two months as part of the preparations for the University’s annual Martin Luther King Jr. Commemoration Celebration on Thursday, Jan. 12. Community members and campus visitors were invited to share their dreams for a better life or a better world, by writing them on sticky notes and placing them on a mobile “Dream Wall” that traveled across campus. 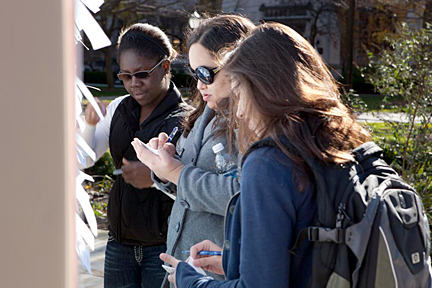 Students add their messages to the mobile Dream Wall that first appeared on the Main Quadrangle Nov. 4, 2011. The wall traveled across campus, appearing in eight different locations where students, faculty and staff continued to add their hopes and wishes for a better life and a better world. Photo by Jason Smith

Sentiments ranged from personal goals for the future, hopes for humanity and wishes for world affairs. While some were silly and light-hearted, others were serious and heartfelt—but all were written to build on the legacy of Dr. Martin Luther King Jr., whose indelible message of hope for racial equality has inspired generations of Americans.

The Dream Wall first appeared Nov. 4, 2011, on the Main Quadrangle, where curious pedestrians stopped to leave their messages of hope and to read what others had written. 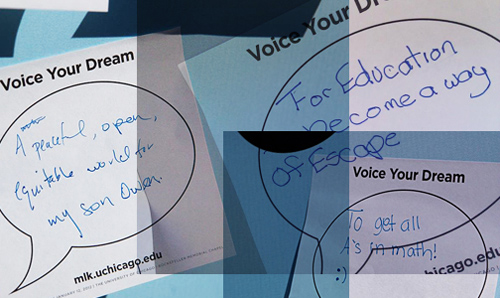 Messages left on the mobile Dream Wall ranged from the lighthearted to the serious and heartfelt. Photo by Jason Smith

By Dec. 7, the Dream Wall had made its way across campus, remaining for a few days at a time in one of eight different UChicago locations. Members of the community also were encouraged to voice their dreams on the MLK Facebook page and on Twitter. 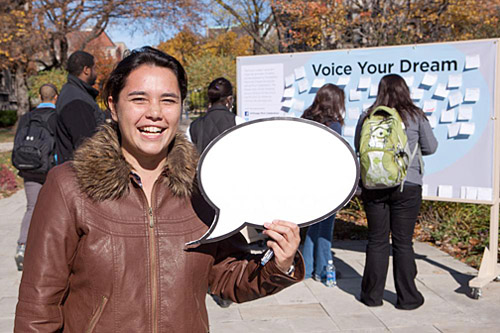 Visit the MLK Twitter feed to read some of the dreams posted there. The messages gathered throughout the month from the mobile Dream Wall will be displayed in the Reynolds Club at a public reception, which will follow the MLK event in Rockefeller Memorial Chapel on Thursday, Jan. 12. 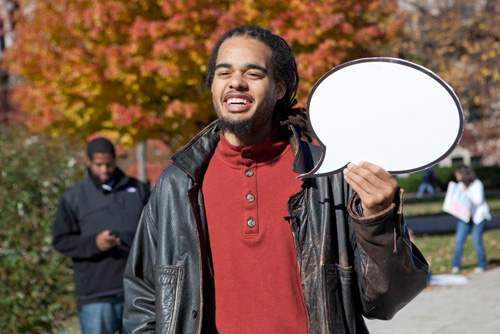 Graduate student Marcus Board faces the video camera to describe his dream. Photo by Jason Smith

Geoffrey Canada, the keynote speaker for UChicago’s MLK Celebration, made his dream a reality for the children and adults living in the Harlem area of New York City by building a system of supports and resources they could depend on for a stronger community. Canada will speak at the Jan. 12 event about education and his work in Harlem.