Scientists originally thought the climate pattern began 22-25 million years ago as a result of the uplift of the Tibetan Plateau and the Himalaya Mountains. But UA researchers say that’s not going back far enough.

The Asian monsoon already existed 40 million years ago during a period of high atmospheric carbon dioxide and warmer temperatures, reports an international research team led by a University of Arizona geoscientist.

Scientists thought the climate pattern known as the Asian monsoon began 22-25 million years ago as a result of the uplift of the Tibetan Plateau and the Himalaya Mountains.

“It is surprising,” said lead author Alexis Licht, now a research associate in the UA department of geosciences. “People thought the monsoon started much later.”

The monsoon, the largest climate system in the world, governs the climate in much of mainland Asia, bringing torrential summer rains and dry winters. 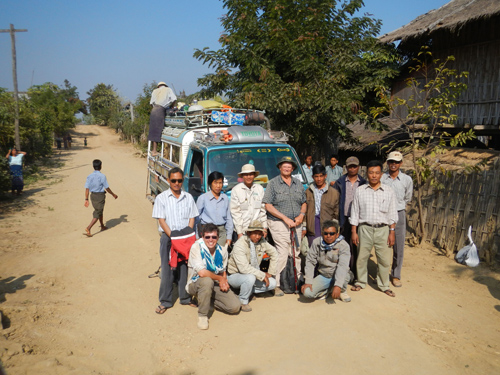 UA geoscientist Alexis Licht (bottom left) and his colleagues from the French-Burmese Paleontological Team used fossils they collected in Myanmar to determine that the Asian monsoon started at least 40 million years ago. Jean-Jacques Jaeger (center, with hiking stick) of the University of Poiters, France, led the team. (Photo credit: French-Burmese Paleontological Team, 2012)

Co-author Jay Quade, a UA professor of geosciences, said, “This research compellingly shows that a strong Asian monsoon system was in place at least by 35-40 million years ago.”

Licht said the study is the first to show the rise of the monsoon is as much a result of global climate as it is a result of topography. The team’s paper was published online in the journal Nature on Sept. 14.

“This finding has major consequences for the ongoing global warming,” he said. “It suggests increasing the atmospheric CO2 will increase the monsoonal precipitation significantly.” 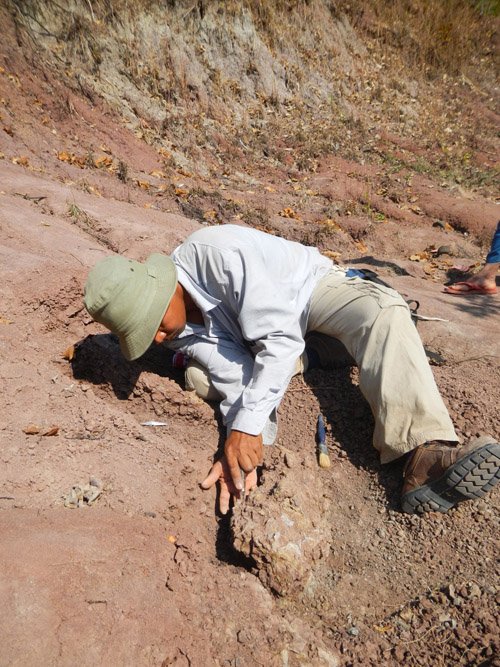 Mana Rugbumrung, a researcher at the Department of Mineral Resources in Bangkok, examines the freshly excavated skull of an anthracothere, a hippopotamus-like mammal that lived 40 million years ago in what is now Myanmar. (Photo credit: Alexis Licht, 2012)

Unraveling the monsoon’s origins required contributions from three different teams of scientists that were independently studying the environment of 40 million years ago.

All three investigations showed the monsoon climate pattern occurred 15 million years earlier than previously thought. Combining different lines of evidence from different places strengthened the group’s confidence in the finding, Licht said. The climate modeling team also linked the development of the monsoon to the increased CO2 of the time.

Licht and his colleagues at Poitiers and Nancy universities in France examined snail and mammal fossils in Myanmar. The group led by G. Dupont-Nivet and colleagues at Utrecht University in the Netherlands studied lake deposits in Xining Basin in central China. J.-B. Ladant and Y. Donnadieu of the Laboratory of Sciences of the Climate and Environment (LSCE) in Gif-sur-Yvette, France, created climate simulations of the Asian climate 40 million years ago.

Licht didn’t set out to study the origin of the monsoon.

He chose his study site in Myanmar because the area was rich in mammal fossils, including some of the earliest ancestors of modern monkeys and apes. The research, part of his doctoral work at the University of Poitiers, focused on understanding the environments those early primates inhabited. Scientists thought those primates had a habitat like the current evergreen tropical rain forests of Borneo, which do not have pronounced differences between wet and dry seasons. 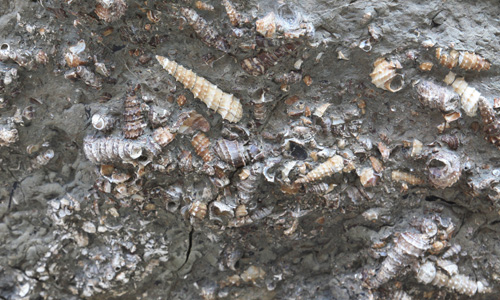 These 35-million-year-old snail fossils in Myanmar contain the record of the past climate in their shells. (Photo credit: Alexis Licht, 2012)

To learn about the past environment, Licht analyzed 40-million-year-old freshwater snail shells and teeth of mammals to see what types of oxygen they contained. The ratio of two different forms of oxygen, oxygen-18 and oxygen-16, shows whether the animal lived in a relatively wet climate or an arid one.

To his surprise, the oxygen ratios told an unexpected story: The region had a seasonal pattern very much like the current monsoon – dry winters and very rainy summers.

“The early primates of Myanmar lived under intense seasonal stress – aridity and then monsoons,” he said. “That was completely unexpected.”

Licht’s next step is to investigate how geologically short-term increases of atmospheric CO2 known as hyperthermals affected the monsoon’s behavior 40 million years ago.

”The response of the monsoon to those hyperthermals could provide interesting analogs to the ongoing global warming,” he said.