Light is an important cue for nearly all life on Earth. Plants use light for photosynthesis, animals use light to set sleep cycles, and marine organisms use light to find food, avoid predators and even hide in plain sight.

Since 2014, University of Delaware marine scientist Jonathan Cohen has been studying how winter darkness in the polar night affects biological processes and marine organisms, such as zooplankton, in the Arctic regions of Svalbard, Norway.

Zooplankton are millimeter to centimeter scale organisms that live in water and form the base of the marine food web. Scientists know that light triggers zooplankton and other marine organisms to move up and down in the water column during normal day and night cycles.

Now, Cohen and an international team of researchers have released a new report in Science Advances that reveals that zooplankton are susceptible to artificial light from research vessels, too. 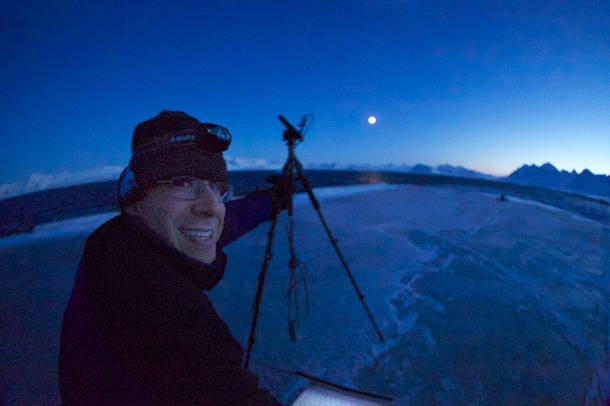 “In the darkness, research ships are enormous orbs of light and, logically, the animals move sideways or down to escape this light and avoid being seen by predators,” explained Cohen, an associate professor in the College of Earth, Ocean, and Environment and its School of Marine Science and Policy.

This means scientists should consider research platforms carefully when trying to understand ecological information in low light environments, especially where light is a determining factor in an organism’s behavior.

“Consider what researchers are trying to do on the ship — they are trying to understand the ecology of what’s happening —but what they are sampling is not real, it’s an artifact of the ship’s presence because light is so important to these organisms,” Cohen said.

The researchers used an autonomous kayak, also known as an autonomous surface vehicle (ASV), equipped with light sensors to detect natural light and acoustic profilers to create a sound image of the organisms in the water column, to study the way zooplankton behave in the Arctic polar night, both in the dark and when light was present in the water column near their research vessel, the R/V Helmer Hanssen. Unlike the ship, the kayak had no artificial light on it.

The researchers found that in environments free from artificial light, zooplankton are intimately connected to the natural light cycle in the upper 30 meters of the water even though the sun never rises above the horizon. The zooplankton descended approximately 8 meters deeper into the water (called vertical migration) at midday, than in the morning and evening. Similar movements occur during full moon cycles up to 50 meters, but not when there is a new moon or no moon.

With artificial light, this effect extends up to 100 meters below the water’s surface.

On the R/V Helmer Hanssen, Cohen had the ship’s lights turned off so he could make light and acoustic measurements, while another group of scientists performed similar experiments wearing headlamps on a 20-foot boat in another location not affected by light pollution.

“So, the response was correct in terms of what was happening in terms of the artificial light in each case. And, the time difference between measurements was only five minutes, which suggests the animals are moving rapidly to escape the light,” Cohen said.

The team’s results also agreed with data from the autonomous kayak, which showed that small scale vertical migrations of zooplankton that occur under the naturally dim conditions were undetectable when artificial light was present.

“It became clear that you can’t make these types of measurements from a large research vessel because of the artificial light pollution,” Cohen said. This light pollution affects the movement of the zooplankton community enough to prohibit the accurate collection of physical and biological data.

Autonomous surface vehicles (ASVs) —like the jetyak used in this study — may offer a number of advantages, particularly for studies in the Arctic. They don’t depend on having a user onboard, they are practical in rough weather, and they are effective in low light. ASVs are automated, too, which provides increased accuracy and repeatability of data collection over large time scales and swaths of ocean.

This is valuable knowledge as scientists anticipate a warming Arctic destined to see significant changes as ice cover is reduced and human activity is increased, allowing additional light to penetrate the water in previously dim times of the year. Scientists are just beginning to investigate how this phenomenon will affect marine organisms. Many scientists also are increasingly interested in understanding how these organisms vertically migrate, because of the ways this might change how carbon and nutrients are cycled in the ocean.

The work may also have broader implications as shipping channels in the Arctic open up, increasing activity and trading routes in an area where biological responses to small variations in light have already been documented.

“With emerging questions like these, the importance of your choice of platform used for research becomes incredibly important,” said Cohen.

Jonathan Cohen is an associate professor in School of Marine Science and Policy, which is housed within UD’s College of Earth, Ocean, and Environment.

Co-authors on the paper include Martin Ludvigsen (the paper’s lead author), Pedro De La Torre, Stein Nornes and Asgeir Sørensen and Geir Johnsen from Norwegian University of Technology and Science; Jørgen Berge, Malin Daase and Maxime Geoffroy from University of Tromsø-Arctic University of Norway; and Hanumant Singh from Northeastern University.

This research is part of a broader project currently underway through funding from the Norwegian Research Council.