Are You Alarmed or Dismissive? Americans’ Latest Views on Climate Change Fall Into One of ‘Six Americas’

In a new report, researchers have found that Americans have a wide range of attitudes and beliefs when it comes to climate change, yet also show some surprising similarities. The report, which is the latest in a series from the Yale University Project on Climate Change Communication, demonstrates how Americans fall into one of six categories called the “Global Warming’s Six Americas,” each reflecting different attitudes and behaviors when it comes to climate change. 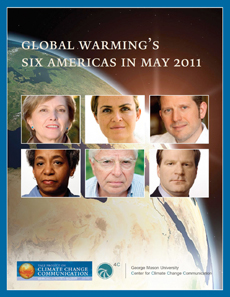 “Americans don’t speak with a single voice on climate change,” said Anthony Leiserowitz, director of the Yale Project on Climate Change Communication. “We have identified six distinct ‘Americas’ within the United States that each respond differently, ranging from the ‘Alarmed’ to the ‘Dismissive.’ Each group has their own constellation of beliefs, attitudes, and values, and these in turn shape their behavior and support for climate and energy policies.”

Nearly 40 percent of American adults fall into the two groups most concerned about climate change — the ‘Alarmed’ and the ‘Concerned.’ By contrast, 25 percent are in the two groups on the other end of the spectrum — the ‘Dismissive’ and the ‘Doubtful.’

However, there were some surprising similarities between the groups, Leiserowitz said.

Despite the fact that 97 percent of climate scientists agree that climate change is happening and is caused primarily by human activities, only 44 percent of those in the “Alarmed” group (those most concerned about climate change) were aware of this high level of scientific agreement. The other groups understood it even less.

According to the report, many Americans remain uncertain about the issue and say they could easily change their minds about global warming, with the “Disengaged” and “Cautious” being the most uncertain of the six groups. Many want more information before making up their minds.

“Interestingly, we also find that all six Americas support funding more research into renewable energy sources, like wind and solar power,” Leiserowitz said. “So although Americans may not yet agree about climate change, they almost all support one of the main solutions.”

The full report can be downloaded here.