Are High-Stakes Tests Worth It?

EAST LANSING, Mich. — The nationally mandated English language proficiency test, given to students whose second language is English, is causing unintended psychological stress for students who can least afford it, according to a Michigan State University researcher.

In research published in the December edition of the journal TESOL Quarterly, MSU’s Paula Winke said teachers and test administrators should assist in the reform of the English Language Proficiency Assessment. Otherwise, the test could negatively impact the academic success of the country’s more than 5 million English Language Learners (defined as those who speak another language). 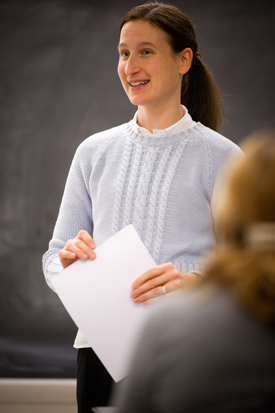 “The test is supposed to measure how well a school teaches English, but the students feel it measures their own abilities and whether they’re a good person,” said Winke, an assistant professor of second languages. “So students often don’t understand why the test is so difficult. They think, ‘Why am I such a failure?’”

Most affected are kindergarten through second graders, who often haven’t mastered holding a pencil to fill in bubbles or reading long paragraphs silently – skills required to take the ELPA, Winke said.

Under the federal school improvement initiative No Child Left Behind, ELLs are required to take the ELPA every year – even if they’re bilingual and even if they don’t plan to take English language classes, Winke said. The test measures students’ ability to speak, write and read English.

Winke began her research after Michigan’s spring 2007 ELPA. She gathered data from 267 test administrators, some of whom indicated their students “wished they weren’t Hispanic or Chaldean so they didn’t have to take the test.”

When parents indicate on school enrollment forms that another language is spoken at home, students become eligible for English language classes, Winke said. Michigan requires 100 percent of its eligible students to take the ELPA, even if they arrived in the United States days before the exam.

Government funding for English language programs is tied to school performance, she said, so there’s pressure from the top down to do well. And it shows.

In other cases, administrators said English as a Second Language classes stopped because teachers were tied up for five to eight weeks administering the test.

While improvements have been made to the ELPA, there’s a long way to go, Winke said. Teachers and administrators should be able to explain test directions. And test questions should be better targeted to students’ grade levels, and when those questions become too hard, the test should stop.

“The U.S. government and states are moving toward a more test-centric society, and we might want to put the brakes on that a bit and consider how these tests impact children,” Winke said.

Winke is the recipient of the 2012 TESOL Award for Distinguished Research for her study. The annual award is given to the best research paper in the teaching English language field.