Baltimore, MD — Exposure to environmental endocrine disrupters, such as bisphenol A, which mimic estrogen, is associated with adverse health effects. Bisphenol A is commonly found in plastic bottles and plastic food containers. New research from a team including Carnegie’s Daniel Gorelick and Marnie Halpern on the effects of these chemicals on zebrafish shows that embryonic heart valves could be particularly in danger. It is published by Environmental Health Perspectives.

Estrogen hormones are important in all stages of life. They work by binding to receptors inside a cell, which then travel to the nucleus and act on the DNA by turning select genes on and off. But some synthetic chemicals mimic these estrogen hormones by also binding to the receptors. Exposure to them during early development is associated with increased risk of cancers and abnormal formation of the reproductive tract. So detecting such chemicals and identifying their mechanisms of action is of great importance for developmental scientists. 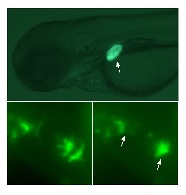 Gorelick, the lead author, Halpern and Alice Hung of Carnegie, along with Luke Iwanowicz and Vicki Blazer of the Fish Health Branch of the U.S. Geological Survey, used genetically modified zebrafish that show estrogen receptor activity on a cell’s DNA.

Unexpectedly, estrogen receptors in the developing heart valves were activated by some water samples, which had not been observed previously. This raises interesting questions about the role of estrogen in valve formation and whether environmental chemicals could contribute to valve abnormalities.